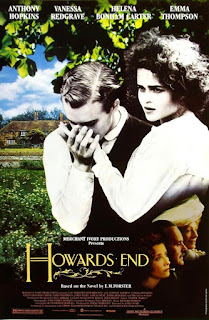 From the mid-1980s to the late-1990s, Merchant-Ivory was the by-word for a certain type of film-making: intelligent and sensitive adaptations of books, with fine British actors in wonderful costumes. It was a perfect brand. And it probably reached its peak with this masterful adaptation of EM Foster’s precise, tragi-comic analysis of class in Britain.

Set in Edwardian England, the film focuses on three very different families: the Wilcoxes, grown wealthy off the back of the Empire, who have purchased large chunks of the houses and lands of the former aristocratic elite; the Schlegels, an upper middle-class family of intellectuals; and the Basts, a lower middle class couple trying to improve their lot. Ruth Wilcox (Vanessa Redgrave) befriends Margaret Schlegel (Emma Thompson) in the last few months of her life and, on impulse, leaves Howards End, her beloved family home, to Margaret when she passes away. With the agreement of his children, her husband Henry (Anthony Hopkins) destroys the note, but later falls in love with and marries Margaret. Meanwhile, Margaret’s sister Helen (Helena Bonham Carter) struggles to help improve the lot of thoughtful, well-read insurance clerk Leonard Bast (Samuel West) – with disastrous results.

The film balances these varying plot lines with great skill. It weaves in both well-judged social commentary and a shrewd and subtle analysis of the way perceptions of morality (and the consequences of people’s actions) alter dramatically depending on the class and sex of the person perpetuating the societal offence. Helped by Ruth Prawer Jhabvala’s masterful (and Oscar winning) screenplay, Ivory’s direction balances this acute scrutiny with an emotional and deeply involving story, staffed with characters whose dignities and flaws are humanly observed. Ivory and Jhabvala demonstrate a masterful understanding of the way we build stories about our own lives and create the people we want ourselves to be – and how this can be influenced by the results of our actions.

These self-images people create of themselves in the film are invariably more noble than the people they transpire to be. Of all the characters, arguably only Leonard Bast follows up on his intentions and consistently delivers on his word. It’s a tribute to Samuel West’s wonderful performance as Bast, as well as the film’s control, that Bast is both a tragic victim and also at times an almost painfully pathetic character, a striver whose every attempt to improve his lot ends in disaster (the film also sticks to Forster’s darkly comic fate for Bast).

While the Basts constantly pay a heavy price for every action, the Wilcoxes and Schlegels largely avoid paying any price for their mistakes until the end. Indeed, Henry Wilcox seems barely able to understand that his past love affair with a young woman left him with a certain moral responsibility for her fate after he broke the affair off. In a brilliant series of short scenes (with fades to black between each section of the conversation) we see him painfully confess the story to Margaret; the fades perfectly capture the mood of a broken up and difficult emotional moment for both characters.

The film perfectly understands the hypocrisy of the upper classes. Wilcox is a man of complete certainty and off-hand confidence, making sweeping statements with complete authority, who has no empathy with the lower classes: “The poor are poor. One is sorry for them, but there it is”, he blithely tells the Schlegels. His son Charles (a smackable James Wilby) is a spoilt and selfish snob with only contempt for anyone lower than him on the social ladder. Helen’s later fall from grace (in its way a manipulation of those dependent on her) is met with a condemnation Wilcox never imagines should never attach to his own actions. The whole film is a brilliant tapestry of these contrasts and flaws.

Emma Thompson won an Oscar for her work here, and she does a wonderful job as the emotional heart and conscience of the film, essentially our eyes into the events of the story. Intelligent and with a deep sense of morality, Margaret is also a woman who is willing to make compromises when she judges there is the need. Her decisions are not always correct or justifiable, but Thompson makes her struggle between her need to do the right thing and her desire to find happiness with her husband constantly understandable. In addition to this, Thompson is a radiant and engaging presence, allowing a character verging at times on being a matronly fusspot to always be someone we care deeply about.

She’s matched by a complex and thoughtful performance by Hopkins as Henry Wilcox. Hopkins has a brilliant understanding of the essential moral emptiness of Henry, based not on any malice or cruelty but on a genuine belief that some rules can be applied differently to him because his position and his own self-image reassure him that he is a good man. One of the film’s main subplots is the journey of Henry to understanding his actions have had consequences – and that these consequences reflect on him. Hopkins handles the growing awareness of this with brilliant sensitivity – his late emotional collapse is a masterclass in low-key, elegant, but deeply moving, acting. It’s also a tribute to the film’s mastery that Wilcox (despite basically being a cold, thoughtless snob) remains a character we relate to, understand and forgive.

Sex bubbles under in this Edwardian world. Henry’s sexual history is a crucial turning point. Helen’s freer attitude to love first brings the Wilcoxes and Schlegels together and then later leads to disastrous consequences with Bast. Tied directly in with the class issues in the film, Charles (James Wilby) is determined later to defend her honour, despite Helen having no wish for him to do so. There is even a hint of sexual feeling in Ruth Wilcox’s sudden friendship with Margaret. Alongside this run themes of the slow and deliberate way relationships develop: Margaret and Henry’s relationship takes the whole course of the film to reach a proper understanding, while Helen (and Helena Bonham Carter is wonderful here as a faintly skittish well meaning do-gooder) and Bast’s friendship shifts and changes throughout the course of the film without either really understanding the other.

Howards End’s complexity is of course in large part due to EM Forster’s original source novel, and his insight as a commentator on Edwardian England and its morals. But to capture so much of the air of the novel in this film, and to bring the story so richly to life, is an enormous tribute to the mastery of Ivory and Jhabvala’s work here and to the excellent work of the cast. The production values are exceptional of course and the film is told with pace, zip and feeling. If there was a high point for the costume drama this (and their follow up picture, The Remains of the Day) was it. Merchant-Ivory would never hit these heights again.
Email ThisBlogThis!Share to TwitterShare to FacebookShare to Pinterest
Labels: 1992, Anthony Hopkins, Costume drama, Emma Thompson, Helena Bonham Carter, James Ivory, Literary adaptations, Merchant-Ivory, Samuel West, Vanessa Redgrave