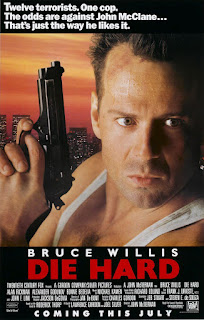 Is there a better action film ever made than Die Hard? In fact, I’m almost tempted to say: has a more influential film emerged from 1980s Hollywood than this masterpiece of tension, action, thrills and wry humour? Die Hard set the template for action: the structure of the hero and villain locked in a battle of wits, claustrophobic locations, one man (sometimes now a woman) against overwhelming odds… There is a reason so many films now have their plot explained as Die Hard on a [insert eccentric location or method of transportation here].

The plot is brilliantly simple and streamlined – so compellingly is the whole enterprise put together that you don’t notice that it was all being made up in the spot (the main hint of that being there is clearly no ambulance in the baddies’ arrival truck). If you don’t know the plot, where have you been since 1988? John McClane (Bruce Willis) is a cop who’s in LA to spend Christmas with his estranged wife Holly (Bonnie Bedelia). Joining her office party at Nakatomi Plaza, a massive skyscraper still partly under construction, their marital discord is interrupted by the building being seized by a group of European terrorists (or are they?) led by urbane sophisticate Hans Gruber (Alan Rickman). Now it’s all down to John, dressed in nothing more than a vest and trousers, without even any shoes to take on a dozen heavily armed baddies single-handed.

Die Hard is a perfect storm – everyone involved was in the right place, at the right time of their careers, with material they were perfectly able to bend to their skills. There have been so many wonky thematic rip-offs of this film that a lot of credit should go to John McTiernan for setting such a brilliant template that proved irresistible to adapt. It goes without saying that the film is whip-sharp and rattling with tension, and that its action moments are brilliantly shot and choreographed. What makes Die Hard work so well is that it puts character and performance at its heart. McClane is a character we can root for, a regular guy as far away from an Arnie or Sly superman as you can get; similarly Gruber is so charming and charismatic, part of you wants him to win.

Although there is plenty of blood and violence, McTiernan doesn’t dwell on it (watch the far more brutal Die Hard 2 for contrast), and there is no sadism in the editing. Instead, McTiernan invests the film with a lot of sly humour and wit – and he is not afraid to acknowledge that there is an illicit thrill in watching intelligent people like Gruber put detailed plans into place, executing them perfectly while running rings around the law. The use of Ode to Joy as Gruber’s personal theme tune is incredibly playful, and the film successfully positions itself in its narrative with Gruber as the protagonist and McClane the antagonist (with the difference that McClane is the character we root for) – as such, McClane’s reactive role in the plot constantly stresses his isolation and vulnerability, while Gruber’s control of the narrative positions him as a truly daunting opponent. A modern film would have kept the reveal of Gruber's plan until the third or fourth reel - here Gruber tells us within five minutes of arriving that he's there to rob the place; immediately we are connected with him and understand his aims, and understand the structure of the film coming up from the start.

The humour of the film is never heavy handed, and it’s perfectly balanced with the threat – Gruber and McClane are witty and dry but their characters are never undermined. The film never forgets its Christmas setting, which makes for a number of humourous contrasts (altogether now “Now I have a machine gun. Ho-Ho-Ho”). There is no comic relief as such, and every character serves a clear role in the plot – no fat on the bones here. I also really like the fact that the film at many points subtly undercuts machismo: the gung-ho FBI agents Johnson and Johnson are cocksure morons; as the SWAT team storms the building one of them stops to shriek “ow” after pricking his hand on a thorn. Sly comedy runs throughout – preparing to defend the building from the same SWAT attack, one of the terrorists glances around nervously before helping himself to some candy from behind a shop counter (because kidnap and murder are not a problem, but stealing sweets is really naughty). The film is packed with rich incidental moments like this that charm the viewer, even while bodies piles up and parts of the building go up in smoke.

Bruce Willis was also the perfect choice as McClane. Not only does he have the physical capability, but he has the acting skills. Long before he succumbed to the smirk or the grimace as his default settings when bored (watch Die Hard 5 – or rather don’t – to see the comparison between then and now), he makes McClane very real. Yes he’s confident and arrogant, but McClane is also laced with self-loathing (watch him beat himself up after his conversation with Holly) and under the surface he has a deep humanity, which dedicates him to saving lives (twice in this film he lambasts himself for not doing enough to save people). Willis not only takes a physical battering over the course of the film – don’t we all wince at the idea of running barefoot over a floor of glass? – but he’s also half the time desperately scared under the adrenaline, using wit and defiance as a defence mechanism. McClane does things in this film we could never do in real life (jump off an exploding building using a fire hose as rope – yup you’re dead) but Willis always feels like a regular guy – someone we can understand, relate too. He’s as far away from Arnie in, say, Predator as you can get.

Of course we’ve come all this way without mentioning arguably the film’s MVP, the incomparable Alan Rickman. Astonishingly, this was his first ever film, but Rickman is so perfectly brilliant in this film that I don’t think it’s an exaggeration to say every Hollywood villain since has been weighed against his performance here and found wanting. Rickman taps into a truth: wouldn’t we all love to be the baddie? Despite it all, Gruber is clearly enjoying himself throughout: to borrow a phrase, he’s an exceptional thief and since he’s moved up to kidnapping we should all be more polite. He’s also sharply intelligent, his invention and arrogant confidence that he has thought of everything are actually rather thrilling – while his exasperation at both McClane and the inadequacies of his underlings are oddly charming. Rickman’s arch and clipped delivery turns lines into endlessly quotable bon-mots – he has a perfect sense of timing and says more with an arched eyebrow than other actors could with a page of dialogue.

The film’s master touch is to recognise early the strength of these two characters and to make the main duel not so much a physical fight as a battle of wits. Skilfully navigating the viewer around the building, Gruber and McClane execute move and counter move, both thinking fast on their feet while never losing sight of their main goals. The film also brilliantly allows them to engage in a running verbal battle via walkie-talkie, making their clash increasingly personal – and also allowing both characters to demonstrate their ingenuity. It also allows us to invest in the clash between them – and to make the sense of one-upmanship that runs through the film feel very alive.

The focus here has been on those two characters, who really drive the film – but every member of the rich supporting cast contributes hugely. Bonnie Bedelia is very effective in a difficult part as Holly – assertive, independent but never trying or tiresome (we see her point on McClane as well, who can be a jackass). Alexander Gudonov is perfect as the Han’s macho-but-short-sighted Number Two. William Atherton is gloriously vile as an exploitative reporter. Hart Bochner embodies the shallow, coke-fuelled, Masters of the Universe 80s as Ellis. Reginald VelJohnson adds a lot of humanity as the thoughtful Al Powell.

Okay there are one or two things wrong with the film (I’ve always found Al’s final use of his gun at the film’s end a bit uncomfortable, and I suspect from the conflicted messages of the soaring music and VelJohnson’s sad-faced acting that this was a tricky moment for the producers to get right). But this is an explosion of filmic joy that constantly rewards multiple viewings (god knows how many times I’ve seen this film). The action sequences never tire, the characters never lose their interest. I don’t think it’s a stretch to call it a masterpiece as well as a landmark piece of film-making.
Email ThisBlogThis!Share to TwitterShare to FacebookShare to Pinterest
Labels: 1988, Action Films, Alan Rickman, Bruce Willis, Die Hard, John McTiernan