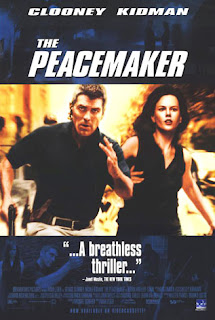 In the late 1990s, Steven Spielberg, music tycoon David Geffen and the former chairman of Disney Jeffrey Katzenberg banded together to pool their knowledge and resources to found their very own film studio, DreamWorks. Excitement abounded – what would be the first film released from DreamWorks? How would all that genius and experience express itself? The answer was The Peacemaker.

It’s a film cobbled together, Frankenstein-like, from bits and pieces of other movies. Russian separatist soldiers steal nine nuclear warheads. The USA immediately leads efforts to locate these bombs, their efforts spearheaded by a maverick Army colonel (George Clooney) uneasily paired up with a by-the-book White House Nuclear Weapons expert scientist (Nicole Kidman). The trail leads them to dodgy Eastern-European officials playing both  sides  shoot outs in picturesque locations such as Vienna and non-descript ex-Soviet republics, and  a cat and mouse chase in New York for a man on a very personal mission of revenge.

It’s quite something, an achievement almost, to sit down and watch a film and see nothing original in it at all. That’s the case with The Peacemaker: there is literally nothing in this film that you won’t have seen in any action film made between 1980 and 2000. It’s such a perfect capturing of clichés and tropes it could almost work as a time capsule piece. A reasonably film literate person could probably take a decent stab at writing down the plot of the film in advance with nothing more than a cast list and brief one-line synopsis.

It’s also fun now to see Clooney and Kidman play such dumb, by-the-numbers roles like this, having seen how far both of them have come since the 1990s. Back then, Kidman was best known for being Mrs Tom Cruise and Clooney as the star of ER struggling to break Hollywood. Both of them go through the motions with assurance, though Clooney is basically Doug Ross in an army uniform while Kidman plays a sort of Hepburnish scientist, overtly unimpressed (but secretly very impressed) by her macho comrade. There is a retrospective interest seeing them in something you can’t imagine either of them touching with a bargepole today.

The film is routinely directed by Leder, then a staple on ER’s director payroll, with a habit of expressing the same clichés over and over again. Most of the action sequences lack any real flair, though a truck chase is reasonably well done and the final half hour chase around New York works well enough.

The plot is straight forward, although like many of these things it doesn’t really make any sense at all when you sit down and think about it (twice I think I’ve watched this in my life, and I still don’t understand how the baddies fund their operation). But everything has a back-of-a-fag-packet briefness to it, not least the yawningly familiar tale of our heroes slowly growing to respect each other. In fact the most original beat of the film is probably that they don’t end the film locking lips.

I guess you could say The Peacemaker is exactly the sort of safely dull, totally forgettable, paint by numbers bland piece you could expect a fledgling studio to dip its toes into the water with. It goes with the sort of formulaic familiarity that’s worked for countless films in the past. It’s inoffensive enough and (good judgement by them) they snagged two actors whose fame has increased exponentially since the making of the film, meaning it will always have a lifespan on TV repeats. DreamWorks went on to much better things than this TV-Movie of the week, but at least this one-for-the-money job is okay, you won’t mind wandering in and out of the room while it’s on, and you might even enjoy some of its spirited retreads of worn clichés.
Email ThisBlogThis!Share to TwitterShare to FacebookShare to Pinterest
Labels: 1997, Action Films, Armin Mueller-Stahl, George Clooney, Mimi Leder, Nicole Kidman