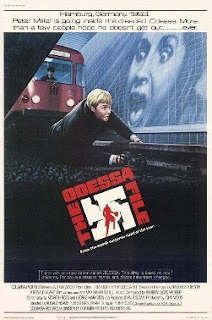 One of the best thriller writers in the game is Frederick Forsyth. He never gets quite the credit he deserves, probably because he’s a very safe writer and he has certain character formulas which he reuses over again. But what his plots lack in depth, they more than make up for in the gripping intensity and extreme readability. A Forsyth plot barrels along and doesn’t let you rest for a minute.

The Odessa File is an adaptation of Forsyth’s journalistic style thriller, exploring the shady world of former Nazi war criminals, now hiding in new identities in positions of influence throughout the German republic. Set in 1963, Peter Miller (Jon Voight) is an idealistic young investigative journalist, who finds the diary of a recently deceased Holocaust survivor. Horrified by the stories of the Holocaust, Miller decides to hunt down the “Butcher of Riga” Eduard Roschmann (Maximilian Schell playing a real war criminal), a renegade Nazi recently spotted alive by the writer shortly before his death.

The Odessa File is an episodic film that carefully follows Miller’s investigation, at first alone, later as an undercover operative for Israeli intelligence. Each scene takes us step-by-step closer towards the final target (Roschmann), which means each scene introduces new characters and locations. The one consistent note we have is Voight, who is pretty good as the driven, idealistic (and arrogant) Miller, and he holds the film together rather well. Each of the tense set-ups works well as a self-contained little story, although it does mean that the overall arc of the film is less engaging than it should be. However, you are invested in wanting the investigation to succeed.

This is partly because the black and white flashbacks to the Holocaust are surprisingly effective from a film from the 1970s. Atrocities are implied and sensitively shown, in an unsensational way, but remain very affecting. Schell’s bombastic acting style also really works as a fanatical and sadistic Nazi (it also works very well in the film’s final confrontation). Combine this with the well-written, unembellished readings from the diary (good work from Cyril Shaps as the voiceover artist) and the film very sensitively establishes its anti-Nazi credentials early on.

Where it doesn’t really work is its whole Odessa plot. The shadowy group of Nazis proves laughably easy to penetrate. The network is then blown wide open seemingly within hours. There is a sub plot about the Nazis supplying missiles to Nasser to fire at Israel which is totally unclear (it has something to do with the factory Roschmann is now running). In fact, the whole organisation’s structure is unclear and the film lacks a real face for its antagonists. The film barrels along fast enough that you don’t notice it too much when viewing it, but reflecting on it afterwards everything makes slightly less sense, and the contrivances become far more glaring.

Other than Miller (whose motives the film is deliberately obscure about) not many of the other characters get a look in. In particular the female characters are little more than ciphers or “stop reading about the Holocaust and come to bed” girlfriends. The Nazis are all pretty interchangeable, although Noel Willman brings a nice sense of menace to a Nazi fixer. The strange intermixing of real and imaginary characters (including Simon Wiesenthal) is also a little odd.

But the story is exciting enough, and Voight’s earnest performance makes you care about Miller enough, that you’ll enjoy watching it. It’s not a classic like Day of the Jackal (a perfect cinematic expression of Forsyth’s forward motion as a writer) but it’s going to keep you entertained for a couple of hours.

SPOILERS AHEAD FROM HERE!
I also think the final revelation of Miller’s motives is bungled and undermines the anti-Nazi message. It turns out Miller is primarily motivated by concluding Rorschmann murdered his father during the war. This immediately trivialises the horrors of the Holocaust – yeah, it was bad, but you can’t expect someone to go to all this trouble to hunt a bad man for that alone can you? It’s a problem in the book as well, but at least there, more weight is given to Miller’s anger at the war. Here he drops a few lines about the evils of Nazism, but it never quite snaps together.

This is a good, decent, sharp thriller – but it has its chances to be more than that, and it misses them.