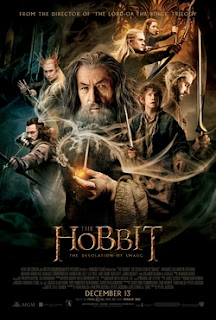 The Hobbit films are an interesting opportunity to watch a team try to recapture lightening in a bottle. The Lord of the Rings were not just a hit – they were a cultural phenomenon and changed the lives of nearly everyone involved in their production. For many of the actors it will be the first line of their obituary. The Hobbit followed the same shooting plan (two years in New Zealand, three films shot back to back) but somehow it didn’t manage to recapture the same magic. It still made squillions of dollars of course, but it’s not as loved as the first trilogy.

Of course the main problem with this is that the three films were (let’s be honest) a rather bloated inflation of a pretty short kids’ book into almost 8 hours of film making. The Desolation of Smaug is one of the biggest victims of this aggressive padding, as action sequences are crammed into to fill up the running time, at the cost of those moments of character development that made the first trilogy such a rewarding investment. This film is all too aware that it is a “big film” and a guaranteed box-office smash, so gives us the action it thinks the punters want. Strangely it all feels more like a contractual obligation (“Peter we need more Tolkien. Three more to be exact. Do what you have to do!”) – what it probably needed (as did the whole trilogy) is a new pair of eyes on it, a fresh take, rather than Jackson having to go back to the well. To be fair Jackson acknowledged this, and tried to hire Guillarmo Del Toro to direct the trilogy (still credited as creative consultant).

The action sequences in this film bizarrely expand moments from the book with overblown padding – they are invariably the duller parts of the film. In that I’ll include the ludicrous semi-comic barrel escape of the dwarves (turned from floating down the river to a chase orgy of Dwarves-Elves-Orc conflict) and the overextended attempt to dispose of Smaug in the Lonely Mountain (again marked by unbelievable acts of athleticism and derring-do which seem so out of step I wonder if we are meant to take them seriously). Add in the huge amount of action given to Jackson-favourite Legolas and we have an awful lot of dull, over-choreographed action padding out a very slim story (no more than 6 chapters of the original book). What the makers seem to feel are the film’s tentpole highlights are in fact the sags in the fabric.

It’s a shame because the moments where the film does hew more closely to the story of the book are easily the best bits. The confrontation between Bilbo and Smaug is the film’s real highlight (helped by Benedict Cumberbatch’s superb vocal work as the self-satisfied fire breather), and (with some tweaks) it’s pretty much straight out of the book. The material in Laketown is faithful enough to the tone of the book, while adding depth to its story and the life of the town so that you invest in its fate (Luke Evans does a good job with surprisingly little as Bard). The inclusion of Beorn the shapeshifter I could have done without (one for the fans) and stupid as the spider attack is, at least it was in the original book. But the more the film starts to focus away from the dwarf plotline and onto elf politics or the terribly vague rise of Sauron story, the less it holds your attention.

Bless him, by 2013 Jackson was probably the only person on the planet excited by seeing Orlando Bloom in a film. The acrobatic elf has all the depth and interest of a cartoon character, while his now heavily over choreographed fight scenes seem to be taking place in a different universe from the first trilogy. In fact, all the scenes involving the elves are deathly dull and add very little to the plot, little more than limp attempts to tie in the LOTR story more fully into The Hobbit. This focus on Legolas also steals screen time from the dwarves, making many of them little more than extras in their own story.

The problem with ramming so much action and extra plot in to link the films into LOTR is that we don’t get the time with the characters we need in order to feel the necessary concern for them. The main problem here is that there are too many characters. There are three people who can claim to be the lead in this film (Bilbo, Gandalf and Thorin). Behind them there are at least 10 prominent supporting characters and behind them at least another 12 small but important characters. That’s 25 characters the film needs to be juggle – in other words about 6.5 minutes each if you divide it equally. Jackson does a decent job with juggling these it has to be said – but it’s still way too many. I challenge any non-Tolkien fan to successfully identify pictures of all 13 dwarves without prompts.

It’s a shame as there are some very good performances in this. Martin Freeman continues to be perfect for the lead role, decent, brave and resourceful (but with small flashes of “ring addiction”); Ian McKellen of course just is Gandalf; controversial as her extended storyline is, I rather liked Evangeline Lilly’s performance; Ken Stott does a lot with limited screen time as Balin. Richard Armitage demonstrates his star charisma again as Thorin, a complex part he invests with a Shakespearean gravitas: in this film Thorin is at times kindly, stubborn, generous, selfish, patient, temperamental, a warm friend, a deeply suspicious comrade – Armitage holds all these threads together brilliantly. Honestly the guy is an absolute star.

Overall, I enjoyed Desolation much more than I remember doing in the cinema. Perhaps it helps that I’ve seen all three films, and understand more where this film is going. It’s still an overblown, overstuffed piece of work that doesn’t have the sense of soul that LOTR has. It mistakes high octane action for human interest and struggles to make all the characters in the film make an impression. A braver adaptation would have reduced the number of dwarves – but I can just imagine the riot from the book fans… What this film really is, of course, is 4-5 really good scenes, surrounded by padding to boost the running time – but those scenes (Smaug and Bilbo, Thorin confronting the people of Laketown, the few quiet talking bits) are very well done, and they just about make the film work. On repeated viewings you’ll find yourself drifting out to make a cuppa during the barrel chase. But you’ll certainly be in your seat when Bilbo first enters the Lonely Mountain’s treasure store.
Email ThisBlogThis!Share to TwitterShare to FacebookShare to Pinterest
Labels: 2013, Aidan Turner, Benedict Cumberbatch, Evangeline Lilly, Ian McKellen, Ken Stott, Lord of the Rings, Luke Evans, Martin Freeman, Orlando Bloom, Peter Jackson, Richard Armitage, Stephen Fry, The Hobbit