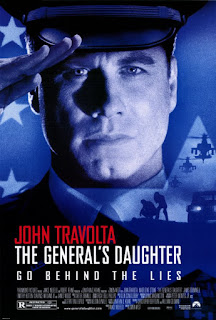 The General’s Daughter is a mundane thriller from the late 1990s, now largely forgotten and quite rightly too. Travolta plays an army Warrant Officer, called in to investigate the rape and murder of the daughter of a decorated Army general (played in his best martinet style by James Cromwell). He works with a female Warrant Officer (Madeleine Stowe) with whom he has Unresolved Sexual Tension. Investigations quickly reveal of course that virtually everyone on the base seems to have had some sort of intimate relationship with the victim.

It’s a pretty straight-forward investigative thriller, but it takes a rather unpleasant leering interest in its victim, with the camera lingering frequently too long on her naked body – even during a rape scene the camera and direction invites the audience to admire the victim’s body: “Sure this is awful, but look ain’t she got great legs!”. Revelations that the victim has a sex dungeon, and indulged in sadomasochistic sex with several people, immediately lead our heroes to state that of course “the circumstances of her death are linked to her life” or words to that effect. In fact, the whole film has a slightly unpleasant air of exploitation about it.

Even more unsettlingly after that, the film-makers strap the fig-leaf of social concern over their film with an end card that mouths platitudes about female soldiers and asks us to pat ourselves on the back about the rise in number of female soldiers and the steps taken to prevent rape occurring in the army again. A bit rich from a film that has taken an ogling fascination in its victim as sexual figure throughout the film.

So let’s be charitable and say its attitudes are a bit dated, and that it does sort of try to say something at the end (however ham-fistedly). It’s still not that good a movie. I’ll give it a point for the fact that I didn’t guess the final killer (though I really should have done), although my wife and I managed to predict pretty much everything else between us. And its attempts to tuttingly wag its finger at the army’s attitude to female soldiers are totally undermined by its pervy aesthetic and grimy, exploitative subject matter.

Travolta throughout aims for cocky maverick but comes across more as a complete cock. His chemistry with Stowe is pretty much zero, which is appropriate as that is the same level of interest I had in their ill-defined past relationship. James Woods phones in another of his quirky wackos, James Cromwell is pretty decent as the General. The best performance probably comes from Clarence Williams III as a hero-worshipping adjutant.

The first twenty minutes of the film are a showpiece for an out-of-shape Travolta to rough up a few suspects and to give him “a very personal motivation” for the case (which almost suggests a guy can’t be expected to care that much about a rape victim unless he had met and flirted with her in advance) – it could effectively be skipped to be honest. The rest of the plot is as basic, half thought-out and mildly tasteless as the film itself. If you wanted to make a film about promoting the rights of women in the army, then this was almost a textbook example of how not to do it.
Email ThisBlogThis!Share to TwitterShare to FacebookShare to Pinterest
Labels: 1999, James Cromwell, James Woods, John Travolta, Madeline Stowe, Simon West, Terrible Films