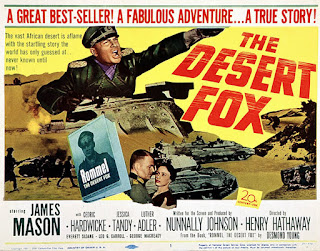 It’s pretty astonishing when you think about it that less than six years after World War II ended, Hollywood produced a film about one of Germany’s leading generals which painted him in a largely positive light. Even more of a surprise is that this was a box-office hit. But then this film was designed to be a step towards reconciliation – especially with one eye on the Cold War and the need for Germany as an ally.

James Mason (brilliant in one of his most iconic roles) plays Rommel, with the film beginning just as the tide of war turns in Africa at El Alamein. Of course, this allows a lot of talk of Rommel being a noble fighter and brilliant general, without having to awkwardly show him chasing the Sixth Army across Africa! From his defeat to Montgomery (unseen but often referenced), Rommel slowly loses his faith in Hitler, realising the Fuhrer cares little for the lives of his soldiers. Gradually he becomes closer to the conspirators of the July 1944 bomb plot to assassinate Hitler. When it fails, he is given the choice: suicide and a hero’s funeral or execution as a traitor for him and his family.

The film is notable for opening with an exciting James Bond-style action sequence, a 1941 raid by British commandos on Rommel’s HQ (codenamed Operation Flipper), designed to grab the viewer’s attention – and to provide the action in a war film that otherwise has virtually no combat in it. It’s a terrific opening that immediately establishes the importance Rommel holds. The Desert Fox was one of the first films to use this device of an action prologue to open the story.

From there, Hathaway’s journalistic film (much of the World War II footage is reused from newsreels) is very smoothly and professionally directed, turning the last few years of Rommel’s life into a classic morality tale. Whether this is completely true or not (more recent research on Rommel suggests he was a much more enthusiastic early supporter of the Nazi party than suggested here), there seems little doubt that he was at the very least sympathetic to the July 1944 bomb plot. Rommel here is a man who sees the light too late - and pays a heavy price.

Nunnally Johnson’s well-researched and tight screenplay focuses on conversations and political manoeuvering, with Rommel presented as apolitical and straight shooting, clumsily working through debates he lacks the political sophistication to understand. Johnson’s script also provides excellent opportunities for sparkling cameos. Leo G. Carroll is particularly good as Rommel’s frustrated and cynical superior, but there are also stand-out performances from Everett Sloane as a lackey from High Command and a memorable cameo of controlled ranting extremity from Luther Adler as Hitler.

The film, though, is carried by James Mason’s subtle and sympathetic performance. Mason has the charisma, his upper class manner perfect for the military man, but he isn’t afraid to play both positive and negative. So we get his arrogance and wilful blindness, showcased in scenes where is passionate defence of Hitler is as much an attempt to persuade himself as others. But we also see his loyalty to his men and the tenderness of his relationship with his wife (played well by Jessica Tandy). Mason’s performance is compelling and soulful.

It’s not a perfect film. There are some slightly clumsy links at the start back to the source book written by Brigadier Desmond Young, who served in North Africa. Young cameos at the start in reconstructions of his meeting-at-a-distance with Rommel and his post-war research. Narration from the book is a worked into the film – and having heard the real Young speak, its mid-Atlantic tone is rather jarring. The narration often serves as a transition from event to event, but this is never completely smooth, meaning there are some odd jumps.

But it’s a very decent, very professionally done piece of film making. Its version of Rommel isn’t seen as the whole story today (there is a whole historiographical argument about the “Rommel Myth” of the man as an apolitical soldier or willing accomplice), but it’s very consistent within the film. Very well acted and scripted and very professionally directed, it’s a political film cunningly disguised as a war film, which does a very good job of creating the atmosphere of Nazi Germany and in re-creating historical events and has an excellent lead performance from James Mason.
Email ThisBlogThis!Share to TwitterShare to FacebookShare to Pinterest
Labels: 1951, Cedric Hardwicke, George Macready, Henry Hathaway, James Mason, Jessica Tandy, Leo G Carroll, World War Two