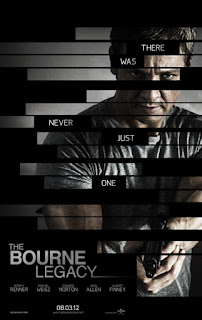 What do you do when the people want more sequels to your film series but you can’t persuade the star and director (no matter how much money you offer) to make another film? Well you can either re-cast or you can put another character front and centre in a sequel. The Bourne Legacy goes for the latter approach and invents a new series of characters and shady CIA programmes so that we can put the old chase-and-fight formula back to work.

Aaron Cross (Jeremy Renner) has been mentally and physically enhanced as part of a series of CIA black ops, overseen by shady CIA bigwig Ed Norton. After the events of Bourne Ultimatum (which overlap with the first quarter of this film), the CIA cuts its losses and orders the deaths of all the agents (including Cross) and the scientists (including Rachel Weisz's Dr Shearing). Of course both Cross and Shearing survive and go on the run. Despite the writing tying itself into knots to connect its story to the previous films, that’s the sum of the plot. Hardly gripping.

This strange historical curiosity spends the first half of its running time attempting to justify its existence. Extensive narrative hoops are jumped through and new footage carefully interwoven with clips from the previous two movies to try and suggest “a plot behind the plot”. It’s a mistake. No one needs to know why the film exists: we just want to get on with a cracking story. Instead we spend an inordinate amount of time unravelling this “sidequel” attempt at franchise expansion, meandering around unengaging and complex plotting that totally fails to engage the interest.

So long winded are these plotting gymnastics, it’s a good two-thirds of the way into the film before our villain becomes aware of our hero’s survival. Our hero never becomes aware of the villain (an unclear flashback is put into place so they share the screen) and only guesses at who is chasing him. This means the chase elements of the film never really click into place and lack anything for the viewer to invest in. The “hero” is an assassin whose objective is to keep hold of his enhanced intellect, obtained from drugs on the “programme”. Well good for him, but its hardly a sympathetic reason for us to root for him. He's still an unrepentant killer.

This isn’t helped by the giggle-worthy flashback scenes of Jeremy Renner in his pre-enhanced state, where Renner seems to be aping Ben Stiller’s performance of Simple Jack in Tropic Thunder. In his enhanced state, Cross is fully aware he is an assassin and a willing volunteer – embracing the very dark secret Bourne was so ashamed of. Neither Cross nor Shearing ever have their actions questioned, or display any sense that they have done anything wrong – it seems clear that they would have continued their dirty deeds quite happily without the plot’s intervention. It’s fine to have morally compromised heroes in a film – but this film doesn’t seem to realise or comment on this at any point.

Whatever your views on the characters, the fact remains that this is a chase movie where the chase is not interesting, takes far too long to get started and never really gets the viewer feeling the tension. As an editor of action, Gilroy is no Paul Greengrass and the fight sequences have the same cold distance to them that the rest of the film has, a by-the-numbers series of clashes where it’s hard to really care what happens.

A brilliant cast of actors is totally wasted. Poor Jeremy Renner does his very best here – he has charm, he’s a charismatic performer, but this is a dull character who we are given no real reason to invest in. Rachel Weisz plays the sort of damsel distress (matched up with the “film scientist” trope) an Oscar winner surely can do without. Edward Norton as with so many other films makes his contempt and boredom with the film totally apparent. Allen, Finney and Straitharn have little more than single scene cameos. A host of great character actors (Isaac, Marvel, Stoll, Ivanek, Keach, Murphy) are totally wasted.

This is a dull, formulaic, unloved sequel that spends more time trying to place itself into the timeline of the previous movies than developing a storyline and characters we actually care about. It moves slowly from location to location, sprinkling in some inadequately filmed fights and chases, never once persuading us that we should care about anything that happens.
Email ThisBlogThis!Share to TwitterShare to FacebookShare to Pinterest
Labels: 2012, Action Films, Edward Norton, Jason Bourne, Jeremy Renner, Rachel Weisz, Tony Gilroy