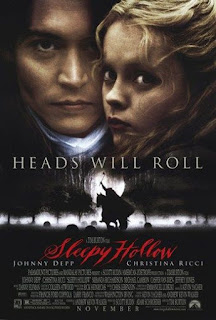 Tim Burton’s films often take on a larger-than-life quality, an overblown fanciful journey into a world that is a few degrees off from our own. So a bizarre ghost story about a headless horseman lopping off bonces left, right and centre, in an isolated town that feels more like a construct from a series of other films than any sort of real place, probably suits him perfectly.

After a series of murders via decapitation in the small town of Sleepy Hollow, Iachobad Crane (Johnny Depp) is called from New York to investigate. An eccentric (what else, it’s Depp) moderniser, Crane believes in logic and forensic investigation and is having none of the fears of the townspeople that the murders are being committed by a headless ghost. However he soon changes his views...

This adaptation bears little or no resemblance whatsoever to the original source material, bar a few homages, one or two brief scenes and a few character names. Burton, indeed, seems to have no interest in it at all: what he is interested in doing is paying homage to highblown Hammer horror films from the 60s and 70s. Whether you enjoy this largely depends on whether you were a fan of either Burton or this style of film-making going into it.

I found the film rather too arch throughout – from the stylised performances of the actors, through to the slight tongue-in-cheek tone. It’s not particularly scary at any point, despite the blood and gore – largely because nothing ever feels real, there’s no sense of dread or peril. Heads are lopped off with an almost comic athleticism, bouncing around floors or rotating on necks. Only one sequence – the murder of a family – carries any real sense of unease about it. The rest of the film is one not-particularly-witty black comedy, in which a lot of time and talent seems to be invested in something not particularly interesting.

Depp is of course perfectly suited to this, his “look at me” acting style springing to the fore as Crane. As usual he overloads the character with quirks and mannerisms, the sort of tricksy emptiness it’s easy to mistake for great acting. The rest of the cast go about their business with a trained professionalism. However, despite the array of British acting talent on display, in truth none of them make much of an impression, with the exception of a nice cameo from Alun Armstrong as a senior New York policeman, and Miranda Richardson who has fun with her role as a sinister housewife with hidden depths.

The awards attention for the film focused on its finest aspects – its look and design. The production design of the film is impressively constructed and the artificial look of the exterior sets actually fits in very nicely within the world of the film. Emmanuel Lubezki’s photography also looks fantastic, shooting the film with a slightly off colour, 70s style that adds a vibrant red to the large amount of blood on screen. Costumes and other technical aspects are also impressive. The film looks fantastically striking, like a brilliantly designed coffee table book – and has about as much plot as one. It's my problem with Tim Burton - this whole "unique vision" of his, often seems to be an excuse for littering his films with in jokes, arch design and stylisation and leaving out the things we actually care about, like characters, emotion and drama.

In the end, it’s really not a lot more than a joke, a pastiche of a certain genre of film that seems much more like one for the fans than a joke that we can all take part in. I’m aware not liking it throws me open to accusations of not “getting it” or expecting more from it, but I basically didn’t really find the joke funny enough. Its arch style make it hard to relate to, and despite the clear enjoyment of all involved, not a lot of the wit behind the scenes is clear in the final product. With nothing to really invest in, a rather sudden ending and a mood throughout that is trying to be creepy rather than genuinely so. Don’t expect a retelling of its plot around a camp fire to awaken too many goosebumps.
Email ThisBlogThis!Share to TwitterShare to FacebookShare to Pinterest
Labels: 1999, Caspar Van Dien, Christina Ricci, Christopher Lee, Christopher Walken, Horror film, Ian McDiarmid, Jeffrey Jones, Johnny Depp, Michael Gambon, Michael Gough, Miranda Richardson, Richard Griffiths, Tim Burton