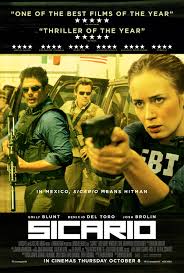 The War on Drugs. Smack a military title on it and it helps people think that there is some sort of system to it, that it carries some sort of rules of engagement. Whereas the truth is that it is a nebulous non-conflict where the sides are completely unclear and the collaborators are legion.

Sicario follows a shady covert operation, run by a combination of the FBI, the CIA, Columbian and Mexican law enforcement and, well, other interested parties. Kate Macer (Emily Blunt) is recruited to the task force because someone with her experience is needed, and finds herself working for maverick, almost pathologically unconcerned, CIA man Matt Graver (Josh Brolin). Graver, in turn, is working closely with a South American freelance operative (Del Toro) whose background and goals remain a mystery to Kate. Far from a clear targeted operation, Kate slowly realises the operation is effectively an off-the-books black op, which she has almost no control or influence over.

Villeneuve has directed here an accomplished, if rather cold, thriller. It denies its audience the release of action, the reassurance of justice or the satisfaction of integrity being rewarded. Instead the film takes place in a hazy never-world, never fully explained to either the viewer or Kate (our surrogate), where it gradually becomes almost impossible to tell who is working for whom and for what reasons – and there is a feeling that those in the film don’t know either.

The whole film has a sense of Alice in Wonderland about it (at the end of the film our heroine literally goes down a tunnel into a strange new land). Emily Blunt’s Kate seems at first to be on the ball, but events throughout the film demonstrate time and again that she is hopelessly out of her depth and little more than a fig leaf to enable her new bosses to bend laws to breaking point. Instead the world she finds herself in is dark, unsettling, confusing and lacks any sense of clear moral “sides”.

In fact, that is one of the most interesting things about this movie. It presents a female lead who is constantly manipulated and defeated throughout the film. Kate is in fact totally ineffective throughout and serves no real narrative purpose to the events of the film other than allowing those events to take place. At the same time, she’s strong-willed, she’s determined and she’s fiercely principled, as well as being an engaging character (helped immensely by Emily Blunt’s empathetic and intelligent performance).

This works so well because Kate represents what we would normally expect in a film – we keep waiting for that moment where she makes a successful stand, or blows the scandal open, or brings someone to justice – this never happens. Instead the film is a clear indication of the powerlessness of the liberal and the just in a world of violence, aggression and corruption – that people like Kate will always be steamrollered by people who are willing to smilingly do anything to achieve their goals and don’t play by any semblance of rules that we would recognise. In a more traditional film, she would end the film arresting some (or all) of the other characters with a defiant one-liner. Instead, she never lays a glove on anyone.

The flip side of her naïve optimism here is Benecio Del Toro’s nihilistic, dead-behind-the-eyes mysterious freelance operative. Del Toro is magnetic here, his character a dark mirror image of the role he played in Traffic, as if that character witnessed every kid he watched playing baseball in that film gunned down before him. He’s like a dark growly end-justifying-the-means shark, who conveys just enough of a flicker of paternal interest in Kate (does he see her as a reminder of what he used to be like?) to show there is someone still human in there. He prowls the edges of scenes before seizing the movie by the scruff of the neck in the final quarter with horrifying brutality.

Del Toro’s rumpled smoothness is a perfect match for the ink jet blacks and bright desert shine of this wonderfully photographed film. Roger Deakin’s cinematography is beautiful to look at and also rich with variation and imagination – from bleached out, hazy mornings to red dawns, from subterranean tunnels to neon lit nightclubs, Deakins presents images in striking new ways. The use of sound is also brilliant in the film – lingering, unsettling silences throughout slowly give way to Jóhann Jóhannsson’s beautiful spare score. There are fine supporting performances from Maximiliano Hernández as a doomed cop, sleepwalking through a corrupt life, Daniel Kaluuya, who is very good as an even more idealistic FBI agent who thinks he understands the world better than he does, as well as from Josh Brolin and Victor Garber.

Sicario offers no comfortable answers. In fact, it offers almost no answers at all. The world it shows us is one where there is no conventional right or wrong, only attempts to control the chaos. Our expectations as a viewer are so persistently subverted that it almost demands to be seen twice to truly understand what sort of story it is actually trying to tell. This helps to make it a cold and distancing film – but it lives in a cold, distant world where sometimes you reach the final frame and only then begin to understand who the baddies might have been and how you’ve only helped funnel the badness towards a controlled point rather than slow down or stop it.
Email ThisBlogThis!Share to TwitterShare to FacebookShare to Pinterest
Labels: 2015, Benicio Del Toro, Daniel Kaluuya, Denis Villeneuve, Emily Blunt, Film noir, Jon Bernthal, Josh Brolin, Thrillers, Victor Garber