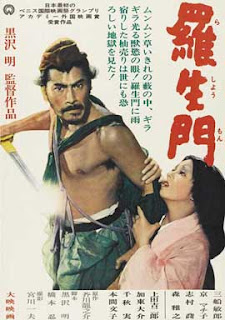 Rashomon is one of those films that Stuart Galbraith described everyone as "knowing it even if they haven’t seen it”. Its structure of unreliable narrators telling different versions of the same story has been employed on almost every single recurring drama that has been screened since its making. You’ve seen the Rashomon story, even if you’ve never seen the film.

In the rainy (no-one works with rain visually better than Kurosawa by the way) countryside, at an abandoned house (it’s called Rashomon, so even the title doesn’t really mean anything to the story) a Priest, a Woodcutter and a Commoner discuss a recent crime in the forest. A bandit, a samurai and his wife all met in the forest. The Samurai was killed. In the investigation, the Bandit, the Wife and the Samurai (via the Medium, imagine if Morse could call on her!) all tell different versions of the story, as does a surprise witness to the crime. Which story was true? Or were they all lies?

One of the main differences watching the original Rashomon now is that we have become so used to the concept of multiple versions of the same story being told that we expect a final answer to be presented. Most often now, the final version of the story is the true version and it allows us to understand for ourselves what was true and what was not in the other versions in the story. This is not the case here: there is no answer. The viewer will never know what happened in the glade: we are in the same position as a jury at a trial – we are presented with four compromised, conflicting stories and we need to select for ourselves what (and who) we choose to believe. The camera is as much of an unreliable narrator as the actual storytellers in the film.

Imagine what a, for want of a better word, head-f*ck this must have been back in the 1950s. They’d never seen anything like it before in a film. Characters might lie, but generally the camera never did. This was the time of Hays Code America, where criminals never got away with it, murderers were always revealed in the final frame and justice prevailed. Rashomon is nothing like this: there is no truth, just a series of lies or obfuscations, with the final story potentially as compromised as the rest. In a world where even a character as likeable as Alec Guinness’ in The Lavender Hill Mob has to end the film being hauled off to jail in chains, it must have been unsettling. People must have felt like the Priest does in the film: “Who can I trust? Where is goodness in this world?”

Of course, many theories have sprung up about what is going on here and what the actual story is – the best of these is probably here, which places a lot of emphasis on the importance of the knife (Kurosawa indeed lets the camera linger strikingly on this knife, embedded in the ground, in version 1). Even the actors on set allegedly bugged Kurosawa for the solution – but the film isn’t about this. It’s about the lies we tell, and maybe why we tell them, not about the truth. The camera doesn’t even allow us to see the body (except from its POV) so we can’t even make a decision ourselves on the nature of the wounds to help us choose between the two possible murder weapons. The truth is effectively not even a character.

So Rashomon is a revolution in narrative terms – but is it good? David Thomson, in writing on Rashomon, pointed out that the device would work better in a story where everyone believed they were telling the truth. I have to say I think he is right. In fact, that is what I had expected – subtle variations in telling, or in delivery of lines, slight twists from story to story. Each story through is actually pretty much completely different (versions 1 and 4 are the closest to each other, but 2 and 3 are totally different) and that does rather rob the story of some depth. If everyone is just lying because they need or want to, that robs the idea of some strength. Anyone can make something up – but none of us can recall perfectly a moment and what everyone involved in that moment could be doing. A film that reflected on that would really have something to say – by removing this idea, I felt a little bit cheated. This might be tied into the modern expectation of there being some sort of mystery to solve here, but I genuinely think that’s a structure that works better and is more satisfying narratively – probably why that way of telling the story is more common today.

Away from the narrative through, Rashomon is the sort of technically assured, inventive film that’s technique has now been so absorbed into our visual language that we actually don’t notice it any more. But before this film, the sort of revolving tracking shots following the characters around the forest had never been attempted before. The shots looking up towards the sun, showing the light breaking through the leaves, had been thought impossible. Even the fact that the whole thing is shot outside is ambitious. The effect of the rain thundering down on the ruined house throughout the framing device is brilliantly done (apparently the water was dyed black so it showed up on the camera), perfectly reflecting the ambivalent mood of the men discussing the case.

Throughout the film, Kurosawa directs with a visual flair that roots the camera as a key player in the telling of the stories. Shots are cunningly arranged between versions to allow contrast and comparison, with the camera placed in subjective positions rather than objective ones, meaning we “see” in the stories only what the person telling the story would choose us to see. It feels very modern – and watching it you can see why many Japanese cinema aficionados moan about Kurosawa being acclaimed in the West primarily because he has had the most influence on Western film making because in turn he was very culturally influenced by Western film making in the first place. I’m no expert on Japanese film-making (like most people I’m largely limited to Kurosawa), but heck it’s pretty clear that he’s a master film maker.

The performances in the film have a high blown intensity about them that should totter the film into silliness but somehow don’t. Toshiro Mifune, objectively, overacts wildly but he’s such a gifted performer that it becomes a magnetic animalism, a sort of eyeball-searing dynamism. Kyō’s performance is perhaps a little too much, but its wildness and nerveless intensity gradually work within the story. Shimura, Chiaki and Ueda are terrific as the homespun average-Joes discussing the case.

Kurosawa’s Rashomon is an impressive technical and narrative accomplishment of its time, but it can never have the same impact when we watch it today, because it’s been integrated so completely into our story-telling and visual language, that watching it now you find it slightly hard to see what all the fuss was about in 1951. Watching it from a modern perspective, you can see elements of the film’s narrative that could have been done more effectively, and you wonder if it’s perhaps more of a short con played on the audience that works very well than a classic – but it is the first time anything like it was ever attempted, and for that reason, if for no other, it will live on in film history.
Email ThisBlogThis!Share to TwitterShare to FacebookShare to Pinterest
Labels: 1950, Akira Kurosawa, Japanese cinema, Toshiro Mifune