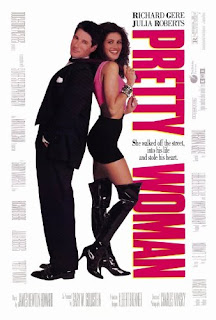 In a parallel universe there exists a gritty prostitution drama Three Thousand. Al Pacino plays a cool, heartless besuited executive who picks up a prostitute, played by Diane Lane. The prostitute is bitter and cynical and addicted to cocaine. Pacino needs a female face and pays her top whack for a weekend’s work with one condition – no crack for a week. However, addiction and bad company are hard to shake off, and Lane’s prostitute succumbs to addiction once again and is turfed out on the street. Realising her life is in the toilet, she closes the movie by catching a bus to Disneyworld (her childhood dream to visit) – hoping that tomorrow “will be another day”.

But that’s a parallel universe, where writer J.F Lawton’s original screenplay Three Thousand emerged onto screens in line with his vision. In this one, Garry Marshall and Hollywood realised that the same story, with a heft of rejigging and a dollop of charm, could become a modern Cinderella story. So in this universe it became Pretty Woman, a charming romantic comedy where a besuited executive (Richard Gere), who has mislaid his soul but is still a charming hero, picks up a wholesome, sweet prostitute (Julia Roberts) – and they both change each other’s lives for the better.

I don’t think such a film would be a hit today. Can you imagine the online backlash? Can you imagine the bashing a film would get that presented prostitution largely as just another possible career choice for a girl in Hollywood? Flipping heck, we’re currently going through a backlash against Ryan Gosling’s character in La La Land, so goodness only knows what the Twitterati would make of Julia Robert’s Vivian Ward in this.

But despite everything, Pretty Woman gets away with it. Julia Roberts oozes so much charisma and joie de vive that you let slide the fact that she is not 1% convincing as a prostitute – or that despite living on the streets and being practiced at selling herself for sex, she remains wholesome and untouched by the nastiness around her. But then that’s par for the course for the entire film – it’s a bizarre fairytale that’s told with such swooping charm and playfulness, and with such an old-fashioned lightness of touch, that it makes you feel churlish to point out that it’s rooted in something profoundly troubling and unpleasant.

Not surprisingly given the character’s initial appearance as a prostitute, Vivian is a role that half of Hollywood turned down before Roberts said yes. But her star-making combination of girl-next-door charm and the perfect amount of sass makes her totally endearing.  She is brilliant. Equally Richard Gere gives a perfect low-key, Cary Grant style performance as the smirking executive. To be honest, he’s no closer to what a hard-bitten businessman would really be like than Roberts is to a real LA prostitute, but hell it doesn’t matter, you still come out of this movie wanting to give him a hug. As the guy sings at the end while our heroes embrace on the stairs, “This is Hollywood!”.

So despite the fact that it should really hit all your outrage buttons, and make you gag on its sentimentality, it’s funny, sweet and lovable enough that you just disengage your brain and go with it. The film does this because it taps brilliantly into the same class unease as we all feel – who hasn’t popped into a high class hotel or (most brilliantly of all) a high-class shop and felt (or been made to feel) “I don’t belong here…”. Despite its subject matter, it all feels endearingly old fashioned, like something from the 1930s. The old fashioned shooting style, the structure that owes a lot to fairy tales, the jaunty old school musical numbers, the restrained sense of sex – it’s all successfully mixed together to make us feel safe.

Away from the wonderful leads, Jason Alexander and Laura San Giacomo have the thankless tasks of showing us what big business sharks and Hollywood Boulevard prostitutes are probably really like, but handle them well. Hector Elizondo is marvellous as a cuddly hotel manager, part a sort of benevolent uncle to Vivian, part a smoothly charming and caring Henry Higgins (although of course, the idea that prostitutes are unknown at high class hotels is equally nonsense).

The film is old fashioned, demands you not think about it and has two perfectly cast, charismatic leads who rarely played these sort of parts better. It’s not remotely rooted in any sense of reality and don’t even begin to think about any sort of message this could send to anyone. Think about it – as millions and millions of people do – as a handsome prince sweeping a normal girl off her feet. Perfect cinematic comfort food.
Email ThisBlogThis!Share to TwitterShare to FacebookShare to Pinterest
Labels: 1990, Garry Marshall, Julia Roberts, Richard Gere, Romantic comedy