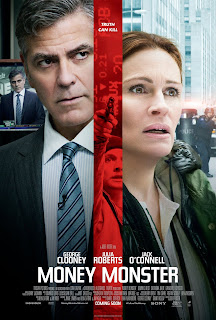 For as long as there has been TV, then the world of Film has looked down its nose at the mass market medium. “It’s in your homes! It makes you dumber! It stops you caring!” Set a film in a TV studio and it’s a fair bet that, before long, some shallow media types will appear, a dramatic on-air event will take place, a shallow man will rediscover his soul and the camera will cut back to punters at home watching the drama as if they it was just part of the show.

All this is exhibited to its full in Money Monster, a passably entertaining hostage drama set in the studio of a fictional Wall Street themed entertainment and “news” show. Lee Gates (George Clooney) is a shallow, image and money-obsessed TV personality taken hostage after a desperate grief-stricken viewer Kyle Budwell (Jack O’Connell) loses his life savings on one of Gates’ tips. However, with the prodding of his director Patty (Julia Roberts), Gates slowly begins to rediscover his journalistic integrity.

Watching the film when it rather heavy-handedly enters into the world of media satire, it’s pretty hard not to remember better films in the same genre. Network covered much of this ground so well 40 years ago, it’s almost not been necessary to watch another film about the manipulation of the media. The Truman Show so successfully skewered the thoughtless collaboration of the watcher at home, that this film’s attempt feels like a rather mundane repeat.

Saying that, George Clooney does a grand job of portraying the shallow, media man re-discovering his depths – although lord knows he’s played this sort of part often enough to do it standing on his head. But he gets the dark comedy of it, and he is also able to deliver on the growing decency and integrity of the character. Julia Roberts is pretty good as a confident professional who has allowed her principles to slide for too long. In this illustrious company, Jack O’Connell more than holds his own, delivering brilliantly as a desperate and angry man.

The hostage taking sequences are quite well done, and threaded in well with the general satirical air of the film. At two key moments during the crisis, the film successfully pulls the rug out from under the feet of the viewer by delivering a different outcome than we might have expected. It’s probably when the film is most effective. It also does a good job threading many of the themes, locations and characters that will become important by the end of the film into its opening moments – many of them done so gently, you won’t even notice until they become important later.

The dark satire around the uncaring nature of big business and its lack of principles also hits more than a few familiar beats (big business being another thing multi-million film companies love to lay into), but this side of the plot is interesting enough – and I didn’t quite work out how the dodgy dealing had worked out. The final reveal and confrontation around this is well staged. It doesn’t tell you anything new, or present its old points in a unique or intriguing new way, but it does it in an entertaining way.

The film generally deserves some congratulation for its staging – Foster directs with a tightness and the flimsy conception of the film is delivered in a taut 85 minutes (almost in real time) which certainly means it doesn’t outstay its welcome. The acting is decent and the points it makes are well delivered, no matter how familiar they are. The film effectively plays with and changes your views on its characters over the course of its runtime. Honestly there are worse ways you can spend an hour and a half. It’s just not something that is going to stick with you for long.
Email ThisBlogThis!Share to TwitterShare to FacebookShare to Pinterest
Labels: 2016, Caitriona Balfe, Dominic West, George Clooney, Giancarlo Esposito, Hostage drama, Jack O'Connell, Jodie Foster, Julia Roberts, Media satire