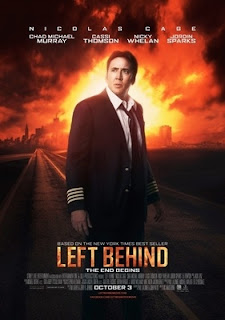 Christian film making. Bible dramatisations can have a certain strength and weight to them. But when it tries to reach into the realm of the blockbuster (inevitably involving the Antichrist somewhere along the line – he would have popped up in the never-made sequel to this piece of excrement) – it never gets it right, po-faced amateurishness taking over as it tries to tell a story that “will appeal to the kids”.

I can hardly bear to remember it, but Left Behind is about the Rapture. In a flash of light, the good people and all the kids in the world disappear leaving only their clothes behind (heaven is a naked place apparently). The bad and the unbelievers (shame on them!) are LEFT BEHIND!!!! The film focuses on some people on a plane. The plane flies around a bit while they panic. Then it lands. Then the film finally ends. There is no plot as such. Every character has been plucked from a stock catalogue: the lothario pilot, the slutty stewardess, the wisecracking New Yorker, the savvy journalist, the plucky daughter… Drinking is essential for viewing the film.

This is an incomprehensible, pointless film devoid of plot or suspense that drifts clumsily from event to event, never building towards any point or resolution. It was clearly intended as the first film in a series, and therefore feels no need to attempt to function as a stand-alone film. In fact the entire film feels like an extended first act – and with tighter story telling it could have been that. What actually happens in this movie? A bunch of people disappear. Cage lands a plane. That’s it. Nothing else really happens. Even the concept of the Rapture having even taken place is basically only a guess by some of the characters: they haven’t got a clue.

In fact, that’s another reason why this film is both terrible and dull. Because bugger all else happens in the story, it’s promoted as the “Rapture movie”. So we at home know straightaway what has happened, but the film drags out its protagonists working it out and then suddenly has them reaching a conclusion based on the watch inscription of a vanished co-pilot and a “BIBLE STUDY” note in the diary of a vanished stewardess. The wait for them to work it out is dull – and then the reasons for their conclusions so swiftly raced through they make no sense.

For a Christian film, as well, the story alternates between heavy handed dwelling on crosses and other paraphernalia, and a bizarre presentation of the overtly religious, who all seem to be either cranks, sanctimonious or both. The film is so ineptly made that it’s clearly not their intention to present the religious like this – it just comes out that way.

Nicolas Cage stars in this film. I can only assume that this was in the midst of his financial problems and that the offer for a huge slice of the budget was too good. Never mind autopilot, he’s barely awake, plodding through the film with a dead-eyed stare, mouthing the direlogue and clearly wishing he could be raptured out of the movie. Even on the poster he looks bemused and confused about why he's there. The rest of the actors are so non-descript that this turd is basically their career highlight.

Leaving aside the acting, it’s a hideously made, cheap-as-chips movie with D-list actors stumbling around wobbly sets. It has no sense of humour, no sparkle but is directed with a hamfisted seriousness. The “action” and “thrills” are laughably flat and have less pazzaazz than an episode of Thunderbirds. But taking pot shots at this crap is like shooting dead fish floating in a barrel. It is horribly, horribly, horribly bad, bordering on inept. Even the most blindly devout Christian couldn’t find a message in this. With friends like these God doesn’t need enemies.
Email ThisBlogThis!Share to TwitterShare to FacebookShare to Pinterest
Labels: 2014, Box office bombs, Christian movies, Nicolas Cage, Terrible Films