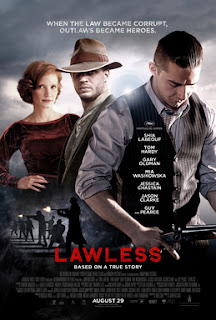 Bootlegging, the Deep South, corrupt cops and the honourable code of criminals. It’s the sort of cocktail that’s made up dozens of films, some good, some bad, some ugly. This one definitely falls into one of the latter two camps.

It’s 1931, and the Bondurant brothers (Shia LaBeouf, Tom Hardy and Jason Clarke) run a moonshine business out of their Virginian countryside garage. One day the cops come a-calling, led by a corrupt US Marshall (Guy Pearce). They want a piece of the action. The brothers say no. So war breaks out…

Truth be told, this is actually quite a boring film – a pointless, clumsily constructed shaggy dog story that neither makes a point about the shabbiness of a bootlegging life of crime, nor challenges romantic assumptions about the small time crook challenging the system. There are a couple of random flashy scenes thrown in to allow the film-makers to demonstrate their technical expertise, but it’s all as weightless as a braggart regaling their guests at a dinner table. Hot air masquerading as a lungful of fresh stuff.

The performances dance between underpowered, over stretched and over indulged. Shia LaBouef doesn’t make his nominal lead a fully formed character. Jason Clarke makes no real impact in an underwritten role. Tom Hardy is the best of the bunch, but barely stretches himself as a bearlike family leader. Of the other major parts, Guy Pearce gives the kind of twitchy, pyrotechnical performance that is often mistaken for brilliant acting, all highblown showing off and no depth. Jessica Chastain and Mia Wasikowska are wasted playing contrasting love interests. Gary Oldman pops up for one scene as an overblown crime lord.

These performances drift along in the formless plot. There are nasty moments of violence that serve no purpose and don’t seem to tie into established characters personalities.  There are also poorly judged plot developments: at one point Jessica Chastain’s character is raped – mercifully off screen – an event never mentioned again. Characters are brutally dispatched; one has his manhood removed and posted to another character, others are strangled, shot or battered to death with spades. The violence continues on and off until the film ends with a confrontation scene between goodies and baddies. Nothing original or unique happens in this film – we’ve all seen it time and time again. There is no thrust to the story, no feeling that it is building towards a point or that a thematic point is being built. It’s just events happening for the sake of it.

Despite its flash and bravura crashes and bangs this is an empty, tedious movie that goes nowhere, says nothing and has no point. Nearly all the events of the film are predictable, from the fate of the villain to the crippled best friend (Dane DeHaan) who has victim written all over him from the first frame. Its surface sheen (it looks great, has a decent score etc.) and the look-at-me acting is enough to fool you for a moment into thinking “this must be a good film”. But it ain’t.
Email ThisBlogThis!Share to TwitterShare to FacebookShare to Pinterest
Labels: 2012, Dane DeHann, Gary Oldman, Guy Pearce, Jason Clarke, Jessica Chastain, John Hillcoat, Mia Wasikowska, Shia LaBeouf, Tom Hardy