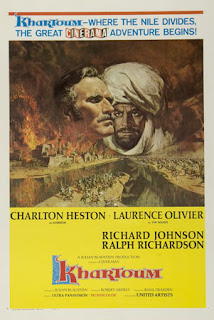 For me you can’t really beat a big epic film. I love their sweeping vistas, the larger than life personalities, the luxurious running times and the vast array of Brit actors you inevitably find filling out the cast list. There is a lovely Sunday afternoon cosiness about a good epic and, since Hollywood spent large chunks of the end of the 50s and the 60s churning them out, historical events and personages replayed in sweeping panovision, there are plenty to watch.

Khartoum takes as its topic the siege of Khartoum and the death of its commander General Charles Gordon (played here by go-to actor for the big epic, Charlton Heston). Part of the now largely forgotten Sudanese war of the 1870s-80s, the siege was conducted by forces led by The Mahdi (Laurence Olivier) a man convinced that he was a reborn messenger of Muhammed.

Khartoum is a film that means well, but it’s a rather stodgy, po-faced history lesson that struggles with the fact that sieges are rather dull eventless things. Combine this with most of the film’s subplot following faithfully recorded political events back in the UK, and it hardly makes for a event filled spectacular. Instead it’s a slightly muddy lecture, interspersed with invented meetings between characters (Gordon and Gladstone; Gordon and The Mahdi twice!) in which they eloquently talk at each other, mouthing out the writer’s careful research, but give us no real insight into the times or the impact events had on the future.

It’s also rather routinely directed, without any flair or dynamism. It’s clearly aiming to be another Lawrence of Arabia, with everything from its music score to the lingering shots of the desert all aping Lean’s masterpiece. An opening narration (by an uncredited Leo Genn) even mulls over Egyptian and Sudanese history, while lovingly showing the viewer some postcard shots of various Nile attractions, seems particularly dry and dusty.

When the film does allow moments of action (which all seem ill-placed in this seriously serious film) they are rather flat and dull. The final attack on Khartoum has a suddenness about it that works well for the overwhelming force of The Mahdi’s army – and the death of Gordon (inspired by George William Joy’s painting) is rather affecting (although the real Gordon allegedly went down all guns blazing) but this is a film far happier with conversation.

What does work in the film, surprisingly, is Heston, who underplays as an enigmatic Gordon, a quiet, unknowable man addicted to the limelight, a serene soldier with a love of peace and religion, a man of the cloth and accomplished solider. Heston allows his natural charisma to do a lot of the work, and he clearly feels a certain empathy with Gordon, gracing the film with the same determined leadership of the general. Heston is an easy actor to mock, his granite face made for legends, but he’s a quietly assured here.

Olivier’s performance is inevitably more troublesome today, the great man dressed up in blackface and a rum accent as The Mahdi. In fact, as per Hollywood films of the time, most of the major Sudanese characters are played by British actors in blackface. Of course it would never happen today – and it’s tricky not to either gasp or snigger at  Olivier’s first scenes – but looking past that first shock (and his opening speech - "Ohhhhh my belovvvvveed" is too much), Olivier gives a detailed study in ambitious fanaticism which is even more relevant in the age of Al-Qaeda. It’s uncomfortable to see, and Olivier allows the mannerisms too much rein (in particular compared to Heston’s confident underplaying) but it’s a decent performance.

I’ll always have a soft spot for this film as it allows us the chance to see Ralph Richardson as Gladstone, one of my favourite historical figures, and one of the two greatest English statesmen (with Robert Peel) of the 19th century. Richardson would have been brilliant in The Gladstone Story (sadly never made) and he brings to life much of the political scheming back home in Blighty, as a Machiavellian version of the Grand Old Man. Anyway, he’s terrific and the various cabinet room debates are some of the most interesting parts of the film.

It’s a shame that the films gets bogged down too early in Sudanese and Egyptian politics (and still manages to muddle the viewer), before settling into the siege from where, interspersed with slightly repetitive conversations. It's clear where the film is going, but there isn't the doom laden dread about this that the film needs. This is a shame, as this story of a colonialist, in love with a colony, killed by colonists while trying to protect other colonists, has a lot to potentially say about the modern world (both now and in the 60s) – it just doesn’t manage to say them.

Note: I was struck in the film by how dangerously many of the horses were thrown about or tackled by soldiers in the battle scenes. “Surely that can’t be safe” I thought as a man knocked over a galloping horse by jumping and tackling its head. Sure enough it wasn’t: allegedly 100 horses bought the farm for this film.
Email ThisBlogThis!Share to TwitterShare to FacebookShare to Pinterest
Labels: 1965, Alexander Knox, Basil Dearden, Charlton Heston, Douglas Wilmer, Historical epics, Laurence Olivier, Michael Hordern, Nigel Green, Peter Arne, Ralph Richardson, Richard Johnson, Zia Mohyeddin