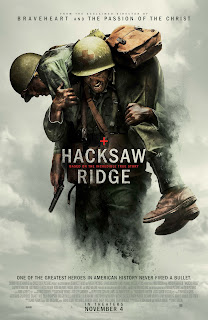 There is a slight odour hanging over Hacksaw Ridge. Few Hollywood superstars fell as hard and as far as Mel Gibson has done in the past few years. As such, the fact that this film has been such a critical and commercial hit is being seen as redemption. While I’m not sure any film could really be that, it’s certainly a clear expression of many of the things that made him a successful superstar – a  carefully made blockbuster that tells a simple story, in a way that mixes sentiment and violence, built around a hero it is impossible not to admire and respect.

Desmond Doss (Andrew Garfield) is a young Virginian man, deterred from violence early in his childhood, who volunteers for service in the Second World War, willing to do everything he can to support the war effort except hold a rifle and take a life. Instead, inspired by his fiancée (a nurse) he wants to serve as an army medic – to do his bit for his country, while standing by his principles. Needless to say his decision is not greeted warmly by his army comrades – but  at the Battle of Okinawa, as his unit goes into service, he proves his heroism saving lives during the Battle of Hacksaw Ridge.

Firstly, before going any further into the merits of the film, Andrew Garfield’s performance in the lead role is extraordinarily good in its simplicity, straightforwardness and aw-shucks charm. Never once does his guilelessness and honesty ever become wearing – instead (and Gibson’s direction helps) he is a man you immediately root for, who you can respect without him feeling perfect. It’s a terrific performance, respectful and admiring but also real. Gibson’s camera showcases his heroism in an unfussy way, avoiding too many directing flourishes – which makes these scenes of life-saving all the more inspiring. A perfect match of actor and role.

There are also plenty of fine supporting performances – Hugo Weaving is very good as Doss’s  shell shocked father, barely able to understand his emotions, with Rachael Griffiths similarly good as his caring mother. Sam Worthington gives perhaps a career best performance as Doss’ captain. Even Vince Vaughan, while sometimes trying too hard as a gruff sergeant, quickly settles into giving one of his finest performances. Teresa Palmer is very sweet as Doss’ fiancée. In fact, there is not a bad performance in it.

But what of the film? Perhaps only Mel Gibson could direct a film that is simultaneously a celebration of pacifism and an endorsement of righteous war. This is perhaps one of the most visceral war films you are likely to see, with bullets ripping bodies in half, the camera unflinchingly recording every injury in gory detail. Say what you like about Gibson, but as an ‘experience’ film maker he is extraordinarily good – he knows how to immerse the audience in ways few others do. He also brilliantly shows both the terror of combat and the courage of soldiers. His staging of the war is tense and gripping, without being sensationalist. In fact, I don’t hesitate to place its depiction of war up there with Saving Private Ryan, combining the savagery of combat with the uplifting courage of a man who only went there to save lives.

Surprisingly one of the strengths of Gibson’s film-making is that he is a very simplistic story teller. His films are morality tales of right and wrong. His heroes, be they William Wallace or Jesus Christ, have overcome burdens to build peaceful homes before a call of duty shatters their world. In a way, that makes Desmond Doss a perfect match for him. The structure of the film, and the familiar beats in the first half of the film, ticking off influences on Doss’ life with a straightforwardness bordering on cliché, all work because they are presented with a guileless genuineness. Gibson successfully establishes a character who feels like an ordinary man who goes on to place himself in an extraordinary position.

Gibson’s simplicity as a story-teller has its drawbacks in the presentations of the antagonists in the film. The Japanese are presented as little better than a faceless horde, a fanatical band of killers, consumed with ruthlessness and lacking all sense of moral decency. Of course, that is to be expected from seeing the film solely from the Western side. But it sits slightly uncomfortably in a film that want to endorse Doss’ values. There are touches of even-handedness – a moment where Doss treats a terrified Japanese soldier in a bunker, or references to a few of the enemy that he lowered off the cliff (although Gibson isn’t afraid to have a soldier bluntly state “They all died” when asked what happened to them). But in a film that claims pacifism is something to admire, showing one half of the conflict as almost universally unfeeling monsters doesn’t always sit right.

This conflict between pacifism and righteous war, is one the film struggles with throughout. If anything it wants to have its cake and eat it too. It wants us to acknowledge the principle of pacifism as a good thing. But it’s also almost scared of being accused of presenting any idea that might be accused of detracting anything from the heroism of the generation that fought the Second World War.

How Doss squared his moral beliefs with helping the men alongside him to carry on killing is none of my business. It’s certain Doss is a far wiser, braver and kinder man than I could ever hope to be, and his actions were genuine, decent, honest and in keeping with his personal morality. I don’t understand his thinking, but that doesn’t matter and the film knows it doesn’t  matter, that we don’t need to completely understand to respect. The film wisely avoids any hokey scenes where Doss explains his convictions. It presents what Doss did as a fact, and says to us “here it is”. The man was involved in a hellish war, but he did what he believed was the right thing to do, and he saved dozens of lives doing it. If we can celebrate the actions of the men on the Normandy beaches fighting Nazism, or the pilots of the Battle of Britain, then we certainly can salute Gibson for bringing to the world’s attention this honourable, decent, brave and above all genuine man.

For all his faults, this film proves Gibson is a first rate filmmaker. Here,  he has made a moving war film that, although it seems to be trying to be many things to many people, still manages to contain a moral message and highlights a man who deserves to be remembered. It may have confusion at its heart about its true attitude towards war – but I believe it does have that heart in the right place, is trying to send a positive message to the world, and is a highly impressive and compelling piece of filmmaking.
Email ThisBlogThis!Share to TwitterShare to FacebookShare to Pinterest
Labels: 2016, Andrew Garfield, Hugo Weaving, Mel Gibson, Rachael Griffiths, Sam Worthington, Vince Vaughn, World War Two