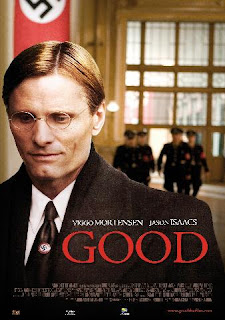 Is there a more overused quote than Edmund Burke’s “All that is necessary for the triumph of evil is that good men do nothing”? It’s virtually become a cliché and can be heard spouted with chin-stroking smugness in everything from Law & Order episodes, opening title cards to crappy action films to the message-boards of the internet. If Good can have any claim to history (and it probably can’t), it can say that it’s the film of the phrase.

Our Good Man is John Halder (Viggo Mortensen). Our Evil is Nazism. Halder is a literature professor in 1930s Germany. He’s written a novel in support of euthanasia: this brings him to the attention of the party authorities, who need intellectual support for their own plans. Halder accepts an honorary rank in the SS – and from there it’s compromise after compromise that leads to the Holocaust. His good and bad angels are his new young wife Anne (Jodie Whittaker), who loves the advantages party membership brings, and his Jewish best friend Maurice (Jason Isaacs), whose situation goes from bad to worse.

It’s a very, very earnest film which wears its heart on its sleeve. Which is the main problem - the film-makers were clearly desperate to “tell it right” and stay true to the original play – but the whole idea comes across slightly outdated, obvious and far too familiar. Whatever point the play had to make when first staged in 1981, has now been said and done to exhaustion. Despite the care and attention, there now isn’t much originality or freshness. As such, it never really rouses any feelings.

The story it tells of its lead’s reluctant seduction into being an active Nazi can probably be charted fairly accurately without watching the film. The plot device of the Jewish friend feels too on the nose and obvious (compelling as Jason Isaacs is in the role), and the betrayals by inaction follow well-established patterns. The few moments of interest are shied away from – when Halder first puts on his SS uniform (to take grudging part in Kristallnacht) his wife is so aroused she performs oral sex on him: it could have been an interesting point about the sexual seduction of power and the brilliant design of Nazi regalia, but the film rushes over it.

I was also not sure about the device of Halder haunted by visions of various figures he encounters lip-synching to scratchy recordings of Mahler songs. You can guess where this going when you see the film, but it’s a device that is a little unclear. It’s meant to signpost moments of Halder’s moral disintegration (Halder flirts with his new-wife-to-be? The music. He accepts SS rank? The music. Congratulations from Goebbels? The music. He abandons his friend? The music.). It’s final reveal, an echo from Halder’s future trip to Auschwitz is interesting but not exactly profound or revealing – and the device is heavy handed in its use in any case. It's clear Halder is a failed man and this device doesn't tell us anything about that.

Despite the film’s predictability and lecturing, it does have good moments. Many of the scenes of Nazi brutality are shot with an affecting simplicity (I admired the cold, POV shooting of Halder’s visit to the arrival point of a camp implied to be Auschwitz), and much of the acting is rather good. Mortensen holds the film together well as the deluded moral weakling blown by every wind; he avoids any temptation for histrionics and is happy to make his character detestable in his weakness (this is a film that challenges us to accept that we would probably be as cowardly as Halder is). This in turn gives more freedom for fireworks from Isaacs, who delivers a passionate and intense performance of angry powerlessness. Whittaker is good in a shallowly written part as Halder’s ambitious young wife. Mark Strong’s cameo as a suave party big-wig is good, as is Steven Mackintosh’s role as a genial SS officer, moaning about his career.

It’s got its moments but this is a stagy, talky film that tells a familiar old story without panache or originality. It settles for making the same point over and over again. It bravely offers no possible redemption for Halder at all, but his general story is so familiar it never engages as much as it should. Essentially the film’s script could just as easily have had its characters endlessly repeat Burke’s famous phrase – in fact, the one surprise in the film is that neither the quote nor Edmund Burke ever gets name checked. Very, very, very noble but lacks life.
Email ThisBlogThis!Share to TwitterShare to FacebookShare to Pinterest
Labels: 2008, Holocaust films, Jason Isaacs, Jodie Whittaker, Mark Strong, Viggo Mortensen, Vincente Amorim