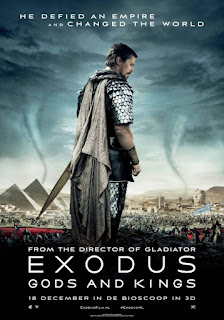 There is something quite reassuringly old fashioned about Biblical story films. They have a sweet Sunday reliability about them, an old-fashioned bombastic self importance, mixed with spectacle and often heavy-handed moral messages. They are just quite fun. Biblical epics have always been popular with Hollywood as there can never be any judgement passed on the amount of violence and sex the stories often contain as, hey, it’s all in “the good book”. It worked for Cecil B DeMille and it continues to work today.

Exodus: Gods and Men is an exception to this rule of Hollywood Bible stories because it is neither fun, nor does it have a clear message. It seems to have been made by people doing their very best to pretend the story of Moses has as little to do with the Bible as possible. In effect, if God is the star of the Bible, then this is an adaptation that tries to minimise the star as much as possible. The story has beats (probably the most interesting parts) where Moses and God warily question each other’s motives, but these scenes don’t have enough weight to them, the philosophical arguments are never clearly expressed. Bluntly, if Scott (an aethist) and Bale (a man who described Moses as “one of the most barbaric figures that I ever read about”) don’t have any connection to the story and its themes – why should we?

Exodus is instead a feeble attempt to recapture the magic of Gladiator. Firstly it is an astonishingly badly written film, full of tin-eared, clumsy dialogue (“Listen, from an economic standpoint alone, what you're asking is problematic to say the least” is Rameses’ response to the let-my-people-go message of Moses). Secondly, it makes little or no attempt to build up its characters. It’s aiming for a “brothers divided” plotline with Moses and Rameses – but neglects to ever show these characters as friends at any point. From the start they are divided, with the introduction of a stupid prophecy plotline at the start of the film existing only to justify a dull battle, a stylistic retread of the Gladiator opening battle. Having failed to show any reason why these two characters should ever care for each other, the film settles into familiar patterns: Rameses the jealous, petty tyrant, Moses the gruff man with a temper, hiding his morality. Not once is there the feeling of a fractured relationship.

Exodus is also highly confused about its feelings towards Christianity. God is literally voiced by a petulant child. Simultaneously Scott also seems keen to attribute as many of the plagues and partings of the red sea as he can to pseudo-scientific reasons – so some sort of meteor causes a tsunami to part the red sea, crocodiles going crazy leads to the Nile turning into a river of blood, that sort of thing. The most interesting moments involve the debates between Moses and God, the vengeful lord favouring shock and awe over Moses’ long-term guerrilla campaign. There are moments here where the film touches upon a point, questioning if God even needed Moses in the first place. But it never really tackles it properly. I suspect we are supposed to see meaning in the weight given to the point that Hebrew means “he who wrestles with God” and see Moses as a man struggling to understand God’s plans for him – but this never really comes together coherently.

Leaving aside all that, it’s a plain badly structured film. From the pointless opening battle scene, screen time is lavished on massive events, but no time is spent on the characters and motivations. Dialogue scenes seem rushed and heavily cut. As such, bizarrely, the film seems both very long and too abrupt. Characters come and go – Bens Mendelsohn and Kingsley drift in and out of the story, Aaron Paul has barely a line of dialogue and Sigourney Weaver’s character seems little more than a cameo. Bale barely moves out of first gear as Moses, Edgerton does his best with a character that is laughably one-note. The film tries to do far too much, without making us invest in anything that is happening.

Instead there are big events, beautiful photography (you’d expect nothing less from Scott) and little else going on. Plagues in themselves are not interesting – people are, and if the characters aren’t developed as people, we can’t be interested in seeing events happen to them. If the film had something unique to say about religion (as it tries to do at times) it might have survived, but instead it’s a rather portentous action film that isn’t about anything – it’s not clear what we are supposed to think of God, it’s not clear what motivated Moses, we’re not clear how he feels about his mission.

Under the surface of Exodus are the beats you need to make an interesting film. A streamlined film that chose to do one thing could probably have done it well. But the storytelling and plotting are so fudged that the film just rolls from spectacle to spectacle, with no heart.
Email ThisBlogThis!Share to TwitterShare to FacebookShare to Pinterest
Labels: 2014, Ben Kingsley, Ben Mendelsohn, Biblical epic, Christian Bale, Dar Salim, Hiam Abbass, Indira Varma, Joel Edgerton, John Turturro, Ridley Scott, Sigourney Weaver, Tara Fitzgerald