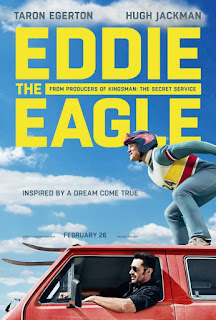 Watching Eddie the Eagle, it’s interesting to think that Edwards was ahead of his time. An unqualified ski jumper with a certain natural talent and a lot of dedication, his unspun, naïve enthusiasm effectively made him a perfect YouTube sensation, 15 years before that term existed. His joyous reactions and “just pleased to be here” manner while coming last in two ski-jumping competitions at the Olympics meant the public couldn’t get enough of him (then or now it seems) and he’s probably about the only thing anyone can really remember about the 1988 Winter Olympics.

I found my heart completely unwarmed by this lamely predictable film, a virtual remake of Cool Runnings and Rocky, which can barely move from scene to scene without tripping over clichés. In other sports films, the snobbery against the underdog feels unjust because we know they deserve to be there. Edwards doesn’t deserve to be there, and doesn’t prove himself anything other than a brave novelty act. Perverse as it sounds, the one area where the film deviates from its predictable formula is the part that makes everything else not really work.

It’s not a particularly funny film. That may be partly because every single comic beat in it is taken from somewhere else, but joke after joke falls flat. Scenes meander towards limp conclusions that can be seen coming a mile off. Every single character is either a cliché, mildly annoying or both. Jackman strolls through the film barely trying. Taron Egerton plays Eddie as virtually a man child, a naïve mummy’s boy, an innocent in the world of men, curiously sexless, but a cheery enthusiast with a never-say-never attitude. However, I often found him less endearing and more mildly irritating.

Virtually nothing in the film is actually true. This doesn’t necessarily matter, but I felt it made the film slightly dishonest. It leaves us with the impression Edwards was set to go on to success in his career – he wasn’t. It doesn’t mention the Olympic committee changed the rules to prevent amateurs taking part in this highly dangerous sport at this level. It doesn’t even begin to mention that almost the entire cast are invented supporting characters, or that many of the real characters (such as Edwards’ father) have had their personalities totally reimagined.

It also reshuffles the truth to make Edwards seem far more incompetent and unlikely than he actually was. In reality an accomplished amateur athlete and skier who just missed the Olympic team, he’s here reinvented as a barely proficient, uncoordinated klutz, a buffoon on skis. Egerton’s otherworldly naivety (at times his childish outlook on the world borders on the mentally deficient) is to be honest rather grating. By hammering up his ineptitude, it’s hard to really think that he should be clinging to these dreams that he’s not suited to perform.

Channel 4 run a TV reality ski-jump show called The Jump. Several celebrities who have taken part in it have suffered serious injuries. With that in mind, is it really wrong to wonder if a sport isn’t right in saying “the unqualified and the amateur shouldn’t be attempting this”? Yes the Olympics is partly about competing in the right manner – but shouldn’t that mean also protecting people from themselves?

The one slightly brave move the film makes is to briefly toy with the idea that Edwards is fundamentally misguided. Before the Olympics begins, his trainer pleads with him to continue his training, wait four years and qualify as a proper athlete rather than a novelty, to have a future of several Olympics rather than cheating into one. Edwards (and the film) ignores him, but I found I was thinking “you know what, he’s right”. The film never manages to remove from Edwards the whiff of the joke act.

I’ve been incredibly hard on this film – it’s not like it’s trying to do anything serious or meaningful. It just wants to tell a nice story about a nice guy. It prides itself on being a bland formulaic piece of film making. But I didn’t find it moving or heartwarming and I didn’t warm to Edwards. I admire his determination, but he’s like those deluded singers chasing their dream on X Factor. The characterisation of Edwards makes him hard to relate to and his final “success” doesn’t mean anything as the film never escapes the feeling that he is being laughed at rather than with. Add the fundamental dishonesty of the film and I found it really unsatisfying.

Give it a miss. Watch Cool Runnings instead. That’s full of invention too of course, but the invention is truer to the facts and the spirit of the truth, and the film itself is far funnier and more satisfying than this one.
Email ThisBlogThis!Share to TwitterShare to FacebookShare to Pinterest
Labels: 2016, Biography, Christopher Walken, Dexter Fletcher, Hugh Jackman, Iris Berben, Jim Broadbent, Keith Allen, Mark Benton, Sports films, Taron Egerton, Tim McInnerny