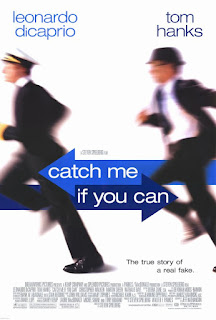 Conmen. You wouldn’t want to meet one but they don’t half make for great stories: largely because tell a great one. Watching cons has the same tension as watching a high-wire artist: will they slip? We all like to think we could fool people if we wanted to – and the movies give us a chance to watch someone else live those fantasies for us.

Frank Abagnale Jnr (Leonardo DiCaprio) was a teenager who was a natural at the arts of the short and long con, as well as an accomplished forger. The film tells the story of his late teens and early twenties when, as well as impersonating a senior paediatrician and a junior district attorney, Abagnale stole almost $3 million from Pan Am by impersonating a pilot and forging checks between 1963 and 1969. Hanks plays Carl Hanratty, the dedicated FBI investigator on the case.

What's great about this film is that, by and large, it isn't trying to be a lot more than an entertainment. In fact, Spielberg deliberately shoots the film in a low key, unflashy style that puts the focus on the story and acting. And there is something hugely entertaining about the chutzpah of conmen, particularly those who are only fleecing huge businesses, which this film really understands and taps into. It’s probably Spielberg’s funniest “comedy”.

It's witty throughout with a sly sense of humour. In his roles as both doctor and lawyer, Abagnale is shown carrying out research by watching TV shows and reading pulp novels – and then repeating their clichés, to the bemusement of those around him (but he delivers it with such confidence it still works). I also enjoyed the fact that his chosen careers (air pilot, doctor, lawyer) are all approached with the same naive understanding a kid would have for what the job involves (and DiCaprio's look of childish terror slipping past his adult facade watching a plane take off from the cockpit and when asked for his opinion on the treatment of an injured child at a hospital are endearingly genuine). The film is told with a great deal of bounce and lightness, taking on the structure of a Wil-E Coyote/Roadrunner chase cartoon, with Hanratty defeated several times by Abagnale’s confident sleight of hand.

The script does have depth to it, rooting Abagnale’s actions in his trauma from a broken family and witnessing his father's humiliating fall into poverty after charges of tax evasion. The film suggests this to be the main motive for Abagnale’s actions – a misguided attempt to redeem his father and take back what was taken from him. This theme of a son trying to win his father's respect gives the film a heft that balances the fluff – especially as it’s clear the son has taken many of the wrong lessons from his father's life on the edges of legality. It's helped in this respect by a wonderful performance of twinkly charm and fatherly pride by Christopher Walken, combined with a sly sense of roguishness.

Leonardo DiCaprio is the motor that really makes this film work. His boyish good looks are perfect for this and he has both the confidence to convince as a trickster and the vulnerability to be the young boy underneath. As such he has the lightness of touch that the story needs and the acting chops to convey the inner pain Abagnale is working so hard to soothe. He's also effortlessly charming and endearing here, surely the perfect traits of a con man.

For the rest of the cast, Tom Hanks very generously plays second banana as the investigator and gives the role a strong sense of the surrogate father. Amy Adams in one of her first roles is wonderfully sweet as Abagnale's fiancée, totally unaware that he is a 17 year old kid. Martin Sheen and Natalie Baye also give good performances.

The film is a light and frothy confection that shades in just the right amount of nuance and depth to make us care for its lead character. With John Williams’ zippy score and its luscious recreation of the late 1960s, it’s also a film in love with the vibrancy of the era. A terrific unpretentious entertainment, it’s not one of its director’s great works, but it might be one of his most joyful.
Email ThisBlogThis!Share to TwitterShare to FacebookShare to Pinterest
Labels: 2002, Amy Adams, Christopher Walken, James Brolin, Leonardo DiCaprio, Martin Sheen, Nathalie Baye, Steven Spielberg, Tom Hanks