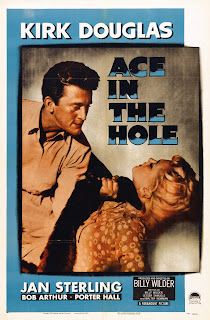 Ace in the Hole was Wilder’s first big flop as a director. It’s not surprising that the media savaged it and claimed it was ridiculous. This is a film way, way, way ahead of its time, a stinging indictment of the ruthless obsession of the media with selling stories rather than reporting them, of spinning out crises to sell newspapers. It’s Fake News decades ahead of its time, a gutter journalism film released at a time when the media was totally trusted. Is it any wonder contemporary critics claimed they couldn’t recognise their trade here? Now it’s practically the way every journalist on film is portrayed.

Charles Tatum (Kirk Douglas) is a big-city reporter fired by a host of newspapers for offences ranging from alcoholism to libel to sleeping with the boss’s wife. Arriving in Albuquerque, New Mexico, he wangles a job on the local paper aimed to eventually encounter a story he can spin into a national media sensation, a crisis with a “human interest story”. A year later, he stumbles upon a cave-in that has trapped a man, Leo Minosa (Richard Benedict), below the surface. Believing this is the story that he can get him back his seat at the high table, Tatum seizes control of the rescue operation, insisting a quick and easy plan is dropped in favour of a week long public drilling operation. Tatum’s reporting of the event becomes a media sensation and in days the abandoned town is full of reporters and rubberneckers.

What’s astonishing here is that this is one of the few films I can think of that is totally devoid of sentiment or hope. It’s ruthlessly cynical where virtually every character is irredeemable, and no suggestion of redemption exists. The only major character who seems normal is Leo himself, although that is largely because his bland non-descriptness (well portrayed by Richard Benedict) and childlike, homespun dependency on those around him make him a near blank anyone can project feelings onto. Wilder’s hard-bitten cycnicsm, bordering on anger with the media and their audience, pulls no punches without descending into polemic – ironically it keeps the human interest, while never compromising the dark satire.

It’s a savage attack not just on journalism and the mass media, but human nature itself. The media stirs up a storm of excitement and drama around one man’s fate solely to make money – and Tatum himself is the worst form of manipulative gutter press, with no interest in truth, investigation or even journalism, only a shark-like love of the main event. But Wilder shows that the people just lap up this exploitative press storm – the growing crush of on-lookers, the bated breath as each update comes in, the literal carnival set up on the site, specially chartered trains – everyone wants to feel part of this story, to vicariously feel the emotions of those the event is actually happening to. It’s virtually a prediction of Twitter.

At the heart of this is Tatum, played with maximum forcefulness and dark charisma by Kirk Douglas in surely one of his finest performances. What Douglas does here that is so skilful is to never make Tatum an out-and-out villain. He plays it with a subtle suggestion of self-loathing: the quietly suggested need for alcohol, the revulsion he feels for those around him whom he sees as reflections of his own moral emptiness. At the same time, if Tatum has morals he long since stopped listening to them. Every time it looks like Tatum has realised what he has done, he reverts back to keeping the story going. Douglas’s dynamism also brings Tatum’s relentless drive and determination to life with real power. Tatum is easily able to cow, bully and bribe those around him into making him the funnel of the story. Never once do you question why all around Tatum bow to his will – his force of personality is so great you have no choice. Despite the hints of self-loathing, Douglas isn’t afraid to play Tatum as a reprehensible man – not bad or evil, just totally self-serving and selfish.

Jan Sterling I was less sure of at first, but actually this is another incredibly brave performance of uncompromising hardness. Lorraine is trapped in a marriage with a man she does not love, in the middle of nowhere, having believed she was marrying into something very different. But even with those provisos, her lack of interest in her husband’s safety and her focus on getting as much cash out of the tourists as possible (to finance her departure to the city) is astonishingly ruthless. Out of all the characters, she is the one who is immediately aware of what game Tatum is playing, and (with his advice) she is the most capable of exploiting the public excitement for her own gain. While she has elements of a femme fatale, Sterling’s performance seems more bitterly cynical than manipulatively feminine.

Wilder’s cynical and hard-nosed film is a brilliantly written deconstruction of the American dream, packed with wonderful lines and sharply drawn characters. It scrapes away at the surface of its characters to reveal the rot underneath – even Tatum’s photographer Herbie degrades from idealist to acolyte – and then blames us all for the mess. It shows us the disgusting ease with which our feelings can be manipulated to sell anything, then shows how gleefully we want to be feel part of an event: shots are filled with details like spectators carrying candy-floss while praying for Leo’s safety.

And then there is a complete lack of redemption – or even suggestion of it. Decent characters are peripheral, and far outnumbered by Tatum and his like. The resolution of the crisis does not go according to Tatum’s plan. It’s almost astonishing in its bleakness and in Tatum’s confused reaction to it and his lack of clear-cut guilt. Again, it’s Douglas’ skill and Wilder’s uncompromising direction: I actually had to watch it twice to catch the shading Douglas and Wilder give Tatum’s reactions to events finally going out of his control – and I still don’t know to what extent self-loathing trumps frustration and disappointment.

This is a masterful media satire and a wonderful, thought-provoking film, surely one of Wilder’s finest. It should be a lot better known than it actually is. I haven’t stopped thinking about it in days and I’m already looking forward to seeing it again. And, if anything, it is getting more relevant every single day.
Email ThisBlogThis!Share to TwitterShare to FacebookShare to Pinterest
Labels: 1951, Billy Wilder, Box office bombs, Jan Sterling, Kirk Douglas, Media satire