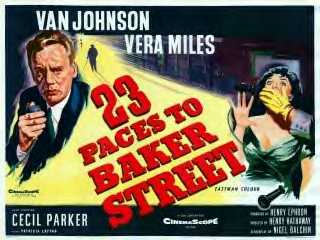 It’s an age-old truth that the movies always believe we can admire a hero more, if we see them struggling to overcome some form of disadvantage or disability that would normally rule them out of carrying out the actions they are trying to do. So what fits into that mould better than a blind man going up against a gang of criminals?

Philip Hannon (Van Johnson) is a successful American playwright living in London, who has lost his sight. One day in a pub, he overhears a conversation between a man and a woman that he suspects is related to the planning of a crime. But, unable to persuade the police of his suspicions, he has only his former secretary Jean (Vera Miles) and butler Bob (Cecil Parker) to help him investigate.

This is the sort of reliable B movie material, with some decent parts and interesting twists, that usually gets remade as a big-star, big-budget modern Hollywood drama. You know the sort of thing: Russell Crowe is a blind writer investigating a crime. In fact, it’s almost a surprise that this has never been remade, as it is an entertaining, diverting small-scale movie – the sort of thing that you can imagine settling down in front on a wet Sunday afternoon.

It’s a sort of sub-Hitchcock drama –fairly similar in tone to Rear Window – and there are several beats in there that totally fit with the master’s dramatic style. In fact, that’s what makes it such a quintessential B movie: everything about it feels like a slightly cheaper alternative to a major picture. Which isn’t a criticism as such: it’s just a very workmanlike, efficient little thriller, which fits neatly into Hathaway’s CV of safe, unspectacular film making. It’s still well made and does exactly what you would expect, but it’s not going to knock anyone’s socks off.

Van Johnson may similarly be a low rent Jimmy Stewart, but he’s pretty effective in this role, suitably vulnerable in places, while still suggesting enough of the prickly demeanour of the man who doesn’t want to be a victim. He also resists the temptation to overplay the blindness – something the whole film actually does quite well. As the man holding the entire film together he does a good job, and he even manages to be more or less believable as a successful playwright. Watching it, you think it's a bit of shame he's not better known today - he's a good (if unspectacular) actor. Vera Miles offers some good support as a supportive love interest while Cecil Parker is quite droll as the butler.

The mystery itself has a few nice twists in it – the final twist is nicely set-up, enough for you to see it coming as we reach the dénouement (a well-staged confrontation in a darkened flat, which gets a lot of tension from watching our blind lead trying to identify all the lights in the house so he can remove their bulbs). The story sometimes doesn’t give us too much of a chance to work out the twists and turns before key clues are revealed by Hannon, but that’s no major problem. It’s also quite well filmed, with some nice shots of 50s London skylines.

It’s a decent and interestingly done film that gets some fresh content out of the blindness of its hero, never portraying him as a victim but as a proactive and determined man. Claims that this is some sort of lost classic are overdone – it’s never more than a sub-Hitchcock B picture – but it’s still highly watchable, has some engaging characters and some decent thriller sequences, and you care about the lead characters, even if you don’t particularly care about the crime itself and its victims (the victims in particular are pretty vague characters). It also relies rather heavily on the legendary heightened senses that blind always seem to have in Hollywood films. But for something that basically sounds like the plot of an ITV two part drama, this is solid craftsmanship.

One final note: the title means nothing. At one point Hannon guides a man through the fog. Turns out he’s 23 paces from his destination: Baker Street. The Hollywood suits were keen to drop in the “Baker Street” reference, to suggest a link to Sherlock Holmes. So goes to show – Conan Doyle, always good box office!
Email ThisBlogThis!Share to TwitterShare to FacebookShare to Pinterest
Labels: 1956, Cecil Parker, Film noir, Henry Hathaway, Van Johnson, Vera Miles