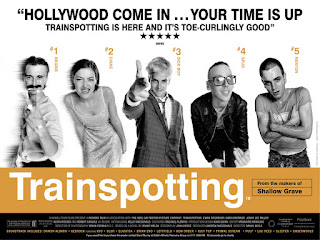 Surprise, surprise the Drug’s Don’t Work. They just make you worse. Honestly, watching Trainspotting you would have to be a Grade A moron or wilfully missing the point to ever imagine that this film could, in any way what-so-ever, be endorsing the life of heroin addiction. The unbalanced, unreliable, sickly-looking, soul crushingly blank-eyed losers in this film are no-ones idea of an aspiration. The fate of Tommy alone, starting the film as a health freak and ending it as a smacked out, paper thin, wasting AIDS victim could only encourage the truly unbalanced to take up drugs.

You must know the story: Ewan McGregor is our “hero” Renton, a junkie with delusions every so often (the film implies this has occurred multiple times) of going clean, kicking the habit only to find that he is always drawn back in – largely it seems due to his own weak personality. Fellow junkies include Spud (Ewan Bremner), Sick Boy (Jonny Lee Miller) and later (tragically) Tommy (Kevin McKidd). On the edge of their junkie circle (not a user) is psychotic Begbie (Robert Carlyle) who doesn’t need drugs when he can get a high from starting a bar fight. The basic plot is slim in this whipper sharp film where experience is all – Renton goes clean, gets sucked back in, misses prison, goes cold turkey, escapes to London, gets sucked back into a drug deal. That’s basically it. What’s important here is the experience.

This is possibly one of the best films about addiction ever seen (I watched it in a double bill with The Lost Weekend which actually works out as a pretty natural combo). Boyle and screenwriter Andrew Hodge aren’t scared to show that drugs at times can be fun (after all if they didn’t make you feel good part of the time why would you do them?) and they can give colour to life (particularly to the shallow non entities this film centres on). The is even a strange family warmth to Renton and friends getting smacked out in an otherwise disgusting dilapidated drug pit, listening to Sick Boy dissect the Sean Connery Bond films. This is then brilliantly counterbalanced by the appalling lows – from the truly unsettling dead baby, abandoned and unfed in said drug den, to Renton’s appalling cold turkey.

Perhaps the most remarkable thing here is that Danny Boyle directs with such verve and with a gleeful delight for every single shooting and editing trick in the book, but the film never feels like a triumph of style over substance, or as if the tricks are the centre of the director’s attention. Instead throughout the whole film you can tell the heart of the film makers – and therefore the heart of the viewer – is also focused on the story and the characters. So we get a film that crackles with energy, with a sense of youthful vitality (that is vital to understanding its characters), has an attractive anti-society message – but also reminds us that the perils of following this kind of counter culture life can be truly horrifying.

At the centre of this film is Ewan McGregor, who I don’t think has ever found a role that he could seize and bring to life as successfully as he did with this one. McGregor is captivating, managing to skilfully demonstrate without any judgement a man who believes he is strong, but is in fact desperately weak. His performance is so charismatic that you hardly notice that Renton is, actually, a pretty nasty person. High or not he has a barely concealed contempt for nearly everyone around him, his reaction to the baby death is shockingly cold, his treatment of Tommy laced with indifference, his pronouncements to the audience overflow with self-regard and delusion. But you just don’t notice.

What you do notice is that Robert Carlyle’s Begbie is a total nutter. Just like McGregor, I think Carlyle struggled to find a role that matched this one, probably not helped by the string of psychos he was offered by casting directors. Carlyle again actually isn’t in the film that much, but he nails how terrifying total self belief can be when matched with a complete lack of any moral sense. In fact most of the cast have hardly ever been better. Excellent support also comes from Peter Mullan, Eileen Nicholas, James Cosmo, Shirley Henderson and Stuart McQuarrie while Irvine Welsh pops up as low rent dealer.

Electric film making with a heart, I don’t think even Danny Boyle has topped this. There is something strangely perfect about this film – anything more and it might out stay it’s welcome, but every scene has something magic in it, some little touch that stays in the mind – either performance, dialogue, direction or all three. It looks fantastic and seemed to define its era. So fingers crossed for the sequel. No pressure…
Email ThisBlogThis!Share to TwitterShare to FacebookShare to Pinterest
Labels: 1996, British Films, Danny Boyle, Ewan McGregor, Ewen Bremner, John Hodge, Jonny Lee Miller, Kelly Macdonald, Kevin McKidd, Peter Mullan, Robert Carlyle