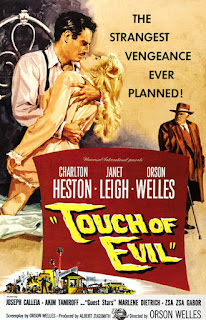 Has any director ever cast himself in such a physically unflattering role as Welles takes on here? Hank Quinlan is a grotesque, sweaty, grossly obese, lame, mumbling copper with a hinterland of loneliness in his past and a background of missed chances. Yet despite this, it’s Quinlan’s film and despite the terrible things he does in the film (kidnap, two murders, suspect framing) it’s very hard not to feel empathy and sorrow for him. Welles’ immense charisma as a performer is a large part of this, but I think he also recognises the sadness of being the genius who has surrounded himself with mediocrities, the man who knows he could have achieved more in life but for whatever reason never did. If that’s not Welles’ career, what is?

Of course Quinlan isn’t actually the lead. Charlton Heston, curry-coloured but otherwise actually pretty good, plays Vargas, a Mexican law agent (“He don’t look like a Mexican” Quinlan correctly observes) with a new American wife, caught up in an investigation into a bombing of an American citizen in a US-Mexico border-town. Quinlan investigates, finds his culprit quickly and produces evidence – evidence Vargas knows for a fact wasn’t there minutes ago. Accusations of corruption fly and, before you know it, Quinlan (a man flirting with corruption) is forced into alliance with a jumped-up Mexican gang leader to frame Vargas for corruption via implicating his wife in drugs and murder.

The plot, however, largely takes second place to Welles’ virtuoso film-making. The opening sequence of the film – an extended three and a half minute single take that tracks in and out of streets, from close-ups to crane shots – has an astonishing “how did they do that?” quality. But it’s matched by Welles’ brilliance with both actors and camera placement during the equally long continuous takes set in bomb suspect Sanchez’s apartment. He’s adept at jinglingly unsettling imagery, with the murder scene 2/3rd of the way through the film almost queasily twitchy in its fragmented shooting style. The final sequence of the film, as Vargas tracks Quinlan through a filthy oil yard, should be silly but is completely compelling.

Welles of course dominates the film as Quinlan. I love the half smile on his face as his praises are sung by besotted partner Menzies early in the film – the “aw shucks, are you talking about me?” non-modesty – but I also adore the unspoken sadness of his early scene with Dietrich, where he sadly attempts to flirt with this (presumably) lost love (we are never told for certain) only for her to literally not recognise him. Quinlan in many ways is a good copper – he frames the guilty, he doesn’t take bribes, he is reasonably loyal – but he’s also selfish, egotistical and needs the adoration of his position to fill the void in his life. He’s a man who’s corrupt almost without realising it, who sinks into bemused maudlin depression when accused without even recognising that he is in fact guilty.

There are some other equally strong performances in the film. Heston of course looks ridiculous – but look past that and this is one of his best performances, Vargas demonstrating the stand-up, straight-shooting honesty of many of Heston’s roles, combined with arrogant short sightedness and narrow minded determination. Janet Leigh is also absolutely terrific as his wife, despite being saddled with a bizarre subplot of being terrorised in a motel. A note for trivia fans – Leigh actually broke her arm before shooting and it’s in a cast throughout the movie bar one shot (where she doesn’t move her arm) – you can’t spot it until you know.

I was particularly enthralled by a beautiful performance of hero-worship from Joseph Calleia as Menzies, Quinlan’s adoring partner whose entire life has been one of loyal service to Quinlan. In many ways he is the moral centre of the film, and as the film shifts its focus to Quinlan, so it equally explores the changes in how Menzies views his boss. Akim Tamiroff gives a lovely performance of puffed up pomposity as a ridiculous small time gangster with a dodgy wig. Dennis Weaver’s hotel manager is an eccentric collection of manners that is more likely to split opinions, but he doesn’t half go for the oddness. Marlene Dietrich is marvellous in her few brief scenes.

Touch of Evil is one of those films that lingers with you and rewards constant reflection and rewatching. I re-watched large chunks of it again immediately the next morning. As a piece of film making it’s a master class, an immersive, tightly framed, wonderfully shot film that brilliantly uses its filthy, litter strewn locations. The acting is terrific and the final moments strangely moving. Welles was a terrible self-promoter and later he ballooned to the very Quinlan proportions that padding and make-up create here. But when he was on his game, and fully focused, he was terrific. As is the film, which is surely one of the greatest (and last) film noirs ever.

CODA: The coda to this? Of course Welles wasn’t fully focused. He cut the film once, then shot off to Mexico to explore a new film possibility. Studio hands recut the film again. Welles sent a famous 58 page memo suggesting changes. Most of them got ignored for the third cut. Three versions of the film now exist – the two studio recuts and a 1998 recut using the memo (Welles’ original was wiped). I watched the 1998 recut. But it’s always the problem with Welles – a man I always felt who largely lacked the focus to actually finish something. The film bombed on release. Welles never worked in Hollywood again.
Email ThisBlogThis!Share to TwitterShare to FacebookShare to Pinterest
Labels: 1958, Akim Tamiroff, Charlton Heston, Film noir, Janet Leigh, Joseph Calleia, Marlene Dietrich, Orson Welles