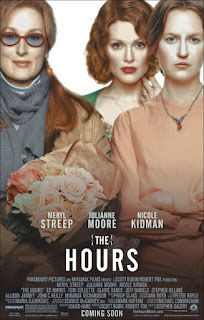 I remember when this film was released that it was garlanded with much praise as an intelligent and compassionate piece of filmmaking and a literate masterpiece. Well I've never seen it before and I have to say it holds up pretty well, even though it's much more of a solid, impressive piece of professional film making than anything you might call a masterpiece.

The film covers three time periods each looking at one day in the life of three different women.  Inspired by Virginia Woolf's novel Mrs. Dalloway, the day we see encapsulates in microcosm the life of each women. So we have Nicole Kidman as Virginia Woolf struggling to deal with depression while working on Mrs.Dalloway; Julianne Moore as a depressed 1950s housewife trapped in a suburban marriage; finally Meryl Streep as an editor in the 200s who has dedicated her life to looking after a poet friend who is dying of AIDS.

Each of these three plot lines are carefully intercut with both sharp scriptwriting and patient direction (Hare and Daldry's stage experience here is a real boon for a concept that is actually quite theatrical). Although the opening sequence of the film suggests we might be in for a dizzying series of intercuts (the time period in this sequence switches almost every shot) it soon settles down into some well structured conversation scenes, moving almost in a cycle from our plot lines to another and only rarely directly cutting mid scene from time line to time line.

Of the plot lines I found Meryl Streep's more modern day plot the most engaging and that Streep's performance as the patient martyr carried the heart of the film. This was despite Ed Harris' overblown performance as the dying poet, one of those two scene cameos that draw far more praise than they deserve. But this story has a tragic simplicity and Streep brings a lifetime of vicarious hopes and dreams out from every beat of the day.

Nicole Kidman however won the notice and awards as Woolf. Well deserved as these notices were, this is a more traditional part with clearer "award worthy" acting moments. While these are excellently done (Stephen Dillane is terrific as Leonard Woolf), the Woolf parts don't quite link with the two other plot lines and, for me, didn't carry the same emotional force that the tragedy of normal lifes did in the later plot lines.
Julianne Moore also does great work as a depressed housewife who lacks the emotional articulacy to fully understand her feelings, though the decision to introduce a direct link between the 1950s and 1990s plot lines later in the film does mean that the Woolf plot line feels even more like a slightly disconnected story. But this section of the film crackles with claustrophobia and Moore demonstrates the confused sexuality below the surface of Americana.

I feel like I've been hard on this film, which is a very professional piece of work with some great performances and some real emotional high points. There are some great cameos from classy actors like Toni Collette, Jeff Daniels, Miranda Richardson, John C Reilly, Claire Danes and Allison Janney. It also is a very sensitive exploration of the pressure sexuality and emotions can press on people - even in the 1990s where homosexuality isn't a dirty secret, Streep's character still has more than enough confused emotional hang ups to sort out.

It's a very good film but it's so professionally done and smoothly assembled, the acting so sharp and on the money, that I'm not sure if there is as much heart behind the scenes in its making than appears on screen.
Email ThisBlogThis!Share to TwitterShare to FacebookShare to Pinterest
Labels: 2002, Allison Janney, Claire Danes, Ed Harris, Jeff Daniels, John C Reilly, Julianne Moore, Literary adaptations, Meryl Streep, Miranda Richardson, Nicole Kidman, Stephen Daldry, Stephen Dillane, Toni Collette