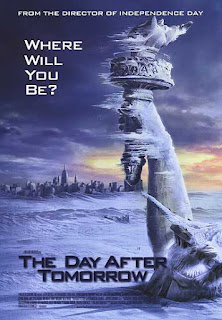 I have to confess there are certain genres I have a weakness for. One of these is the big-budget disaster movie. For some reason, nothing helps me relax or unwind more of an evening than watching some of the great landmarks of the world being destroyed or seeing hundreds of people fleeing before a tsunami/pyroclastic flow/asteroid impact/tornado etc. There is clearly something wrong with me.

The Day After Tomorrow fits very comfortably into this trope, offering up some totally predictable and entertaining-enough thrills combined with total ‘scientific’ nonsense. Thanks to man’s foolishness, the climate of the Northern hemisphere is changing, and only Professor Jack Hall (Dennis Quaid) knows that it’s happening (although to be fair he does say it will take place across hundreds of years). But gosh darn it doncha know, suddenly those projections are revised to “the next six to eight weeks!” Cue cold snaps of -100°F dealing out death in Scotland, brick sized hail bashing in heads in Tokyo, and a tsunami taking out New York. Of course Hall’s son (a game Jack Gyllenhaal) is trapped in New York so Hall mounts a rescue mission...

The world-destroying scenes are suitably high scale and dramatic, with Roland Emmerich showing his usual efficient martialling of special effects. Emmerich doesn’t get quite the credit he deserves – as a B movie hack director, he’s very good at keeping the viewer fully aware of what’s happening all the time and to whom, and very rarely labours any particularly point. He also has a goofiness about him, when directing this sort of nonsense, that encourages you to disengage critical faculties and join him for the ride. Don’t get me wrong, he’s no Hitchcock – but compared to Michael Bay, he’s David Lean.

The story doles out the expected personal dramas amongst the chaos. Its main issue is that “weather” doesn’t make the most relatable nemesis ever committed to screen. To cover this, some timber wolves are introduced into New York to terrorise Gyllenhaal and his trapped student friends (Emmerich, bless him, carefully stages a scene earlier where befuddled zookeepers stare aghast at an empty wolf pen and comment “The wolves are gone!”). To be honest, though, these animals are a bit dull – what people will really remember are the desperate dashes to get somewhere warm while another “death-on-contact” cold snap speeds towards our heroes. As most of this stuff happens in the first half of the movie, the second half can rather drag – with the Northern hemisphere effectively destroyed early doors, what else is there left to show?

Emmerich does have some fun with politics. One of the joys of the disaster film (I find) is the inevitable crowd of characters who denounce any chance of the disaster occurring. Emmerich goes one better here by having the President and Vice-President vocally and visually imitate then-office-holders Bush and Cheney. The facsimile Bush even defers to his facsimile Cheney. It makes for some heavy-handed digs at their Presidency’s lack of impetus on climate change, and general perceived weakness, but hey at least the film is using blockbusting to make some tongue-in-cheek political points.

The characters are all pulled from the stock. Quaid does his usual decent job as the guy you hire for this sort of film when your first choices are unavailable, but he never lets you down and brings a lot of dignity to the ludicrous concept. Gyllenhaal and Rossum are rather sweet as smart teenagers (gotta like a film where all the young characters are bookish nerds). Smith gives some good comic support. Ian Holm and Adrian Lester manage to keep a straight face and provide a lot of dignity to roles that must have been little more than picking up paycheques.

Disengage brain, settle back and enjoy the carnage. Emmerich is like an eager-to-please student proudly presenting his work on parents’ day. The great thing about him is that you know he is a booky, geeky type (like his heroes here) and he’ll never do anything to offend you.
Email ThisBlogThis!Share to TwitterShare to FacebookShare to Pinterest
Labels: 2004, Adrian Lester, Dennis Quaid, Disaster Films, Ian Holm, Jake Gyllenhaal, Jay O Sanders, Roland Emmerich, Sela Ward