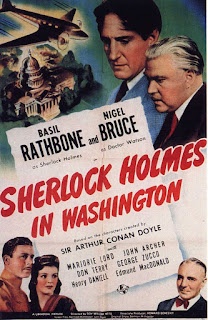 With Sherlock back on our televisions, it's always great to revisit the old Basil Rathbone classics for a neat comparison. They also serve as reminders to us that setting the stories in the modern day is far from a new idea as, in this picture Holmes takes on a Nazi spy ring in the heart of the American capital.

Of course anyone watching with even an ounce of experience of watching films will quickly suss out nearly everything in the film within seconds. A British agent goes missing en route to Washington carrying some crucial government secrets (in a rather nifty opening sequence we follow our antagonists trying to work out who among the passengers on a train is the British agent). Holmes is called in and the trail soon leads to Washington. The game's afoot!

It's all quite good fun clearly inspired by Hitchcock and Chandler, odd as it is to see Holmes running around with American gumshoes or flick Watson a thumbs up. Rathbone carries it all off with style although his deductions are elementary to say the least  (the British agents home is full of photography and microfilm equipment - I wonder what he might have done the letters...) and he has a lot of fun with a few snide put downs and later when disguised as a bumbling Brit in a antiques shop (don't ask). His smooth, cool authority makes the final scenes really work.

There is also some quite effective comic relief from Nigel Bruce's Watson, here obsessed with Americana, seen picking up slang, slurping milkshakes and chewing gum. In fact there is a touching pride from the film makers for their travelogue sections, the camera lingering on aerial shots of buildings and stills of famous buildingw. Holmes arrival sequence is almost completely given over to shots of Washington landmarks followed by Rathbone stressing their "magnificance" to Watson and the audience. Later of course Rathbone sings America's praises and uses a Churchill quote to show that "we are all allies together". Yay for the allies!

This is silly stuff and highly predictable, but it's professionally made and bounds along. A sequence at a party mines a lot of humour from the casual passing around of a match book containing the vital microfilm. Most of the American support is pretty forgettable (although Clarence Muse gives a great cameo as a bus boy), but Henry Daniell makes a good heavy and George Zucco's late introduction as a master agent makes a decent antagonist. Rathbone is authoritative amongst the nonsense and Bruce actually quite fun (though his Watson remains a moron). It's a fast moving, totally predictable, rather silly spy film that happens to have Sherlock Holmes in it. You'll enjoy it. And if you forget it don't worry - you'll work it all out again as soon as you see it.