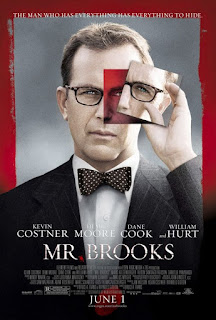 Apparently when Kevin Costner read the script he thought it was the best script he had read in years. This probably says more about Kevin's choices since the early 1990s than it does about the script itself but this is still a decent enough thriller with an interesting twist on the psychopath killer story.

Costner's Mr Brooks is a successful business man and loving family man who also happens by night to be a serial killer. The twist being throughout that he is accompanied in his crimes by his imaginary friend, played with creepy relish by William Hurt. Brooks is consumed by guilt from his "addiction", visiting AA and constantly claiming he is ready to quit. The film opens with an unexpected curtain being left open during a carefully prepared murder, leaving Brooks open to blackmail from an eye witness with a taste for trying this murdering lark.

The film is performed with such guilty and gleeful relish by Costner and Hurt that it's incredibly easy to be swept up by its momentum and to forget that out hero is a serial murderer. The film is very careful to give centre stage to the invention and intelligence of its anti-hero which, combined with Costner's fundamental likeability as a performer, are very attractive traits for any viewer. Only at a few points is the darkness of Brooks explored, most prominently from Costner's near orgasmic sigh and shoulder roll after committing the first murder of the film. Otherwise the viewer is as seduced by this dark world as Brooks himself has been.

A sub plot about Brooks daughter possibly inheriting her murderous inclinations is much less interesting but does allow Costner to offer an amusing twist on the straight-as-an-arrow American heroes he made his career playing. But it never engages as much as the strange will-he-won't-he dance Brooks has with his blackmailer  (a fantastic performance of scuzzy bravado hiding cowardice from Dane Cook). Demi Moore also gives a surprisingly effective performance as a hard as nails career copper chasing down the murders.

But it's the performances of Hurt and Costner that really lift this film up into the higher reaches of the second tier of psychological thriller, along with the neat concept of the childhood imaginary friend gone completely over to the bad. Hurt in particular is terrific, in a performance that is part raging id monster part caring big brother. A dark guilty pleasure I'm not surprised it is slowly gaining cult status.