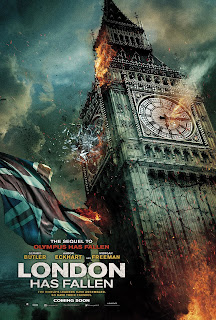 Devoid of any sense of humour, decency,  charm or emotions at all this is a brainless and tasteless action film crammed to the gizoids with extreme knife based violence,  growled threats and paper thin characters none of whom are remotely interesting or engaging. It's cast iron certainty, it's self righteousness and brutality make it a deeply unpleasant, off-putting and unlikeable film.

Basically the UK PM is slain and the G8 assemble like besuited Avengers for the funeral. Unfortunately some terrorists have hatched a plan to wipe them out in revenge for a pre-credits missile strike and sure enough we have a series of assassinations in the opening seconds by villainous shady terrorists. Spreading the stereotypes fairly BTW the French leader is a yacht based dilantte, the Italian a geriatric lothario and the German a sour faced deadly serious Angela Merkel type.

The main problem with this is Gerard Butler. The film sinks completely under the weight of Butler's self importance and chronic lack of humour . At no point in this film does Butler's Mike Banning make any mistakes or offer up any form of human reaction such as fear or uncertainty. Compare him instead to John McClane and the moments of terror Willis dips into that role to humanise it. Also remember that Willis is charming and witty in that film. Butler however thinks alpha male certainty and grim faced contempt for everyone he meets (bar his bosses and a Scottish SAS captain) will endear us to his character. Instead it makes him border line terrifying - it would surely only take a wrong word, for Banning to turn his fury on an innocent bystander.

Mike Banning however is a violent psychopath, Butler thinking that brutally murdering a captive with a knife while growling some zenophobic one liner counts as wit. To be honest I'd be scared shitless if I was protected by this psycho who growls brutally from start to finish, all too clearly enjoying the mass killing. There is a vague attempt to humanise him with the introduction of a pregnant wife at home but instead you dread what values Banning is likely to invest the infant with in the future.

In fact the whole film has a horrible jingoism, xenophobia and racism running through its centre. It's attitude to anything not American (or at a push British) is at best suspicion, at worst outright hatred. Anyone with a beef against America is twisted, evil, riven with jealousy and hatred of freedom and shucks we should cheer as Banning brutally tortures one of them in his final moments. America! Fuck Yeah! It gives patriotism a bad name.

The film passes the time if you enjoy seeing London destroyed (again) on film, and the body count of gruesome kills is high enough to satisfy anyone's needs for violence, although the killing is so graphic and the film lingers so leeringly on each knifes plunge with the perversity of snuff film. A load of Brits (Colin Salmon, Charlotte Riley and Patrick Kennedy) dial in worried expressions from a control room (needless to say one of them is a traitor) while sportingly Morgan Freeman, Melissa Leo, Robert Forster and Jackie Earl Haley do similar jobs in a bunker in America.

But the film is almost proud of the fact it has nothing new to say at all and seems totally unaware of its fundamental unpleasantness. It's actually a nasty, bigoted, small minded, cruel film that hates anything different. It thinks it has a Die Hard lightness of touch - but it really, really doesn't. Butler is charmless and horrible and the film is revolting. Avoid it.
Email ThisBlogThis!Share to TwitterShare to FacebookShare to Pinterest
Labels: 2016, Aaron Eckhart, Action Films, Angela Bassett, Gerard Butler, Melissa Leo, Morgan Freeman, Terrible Films