WARNING: SPOILERS AHEAD!
Okay this review will discuss the plot of the film in some detail, including the ending so if you want to avoid hearing more(and I think the film is best enjoyed as an experience if you don’t know what happens at all) don’t read on.
Last warning: SPOILERS AHEAD! 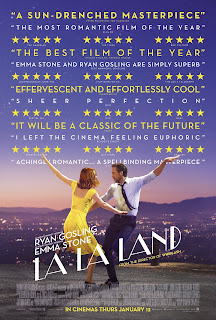 A sweeping camera carries us over a freeway. The drivers honk horns and impatiently stare at the gridlock. Then the camera hones in one woman who starts to sing. Then others join in. The camera never cuts as the singing and dancing spreads around the whole freeway. Through the number, it follows people back into their cars and then settles on a woman reading over her audition piece. It’s a bravura moment, an ambitious piece of cinematic daring. It tells us that we are in for a ride. We get on.

Seb (Ryan Gosling) and Mia (Emma Stone) are early-30-somethings in Los Angeles. She is trying to make it as an actress (and this film really shows the soul-destroying nature of auditions), he dreams of opening a jazz club. Their paths cross a few times, until they meet at a party where he is performing as part of a terrible covers band. They flirt, they fall in love. But can true love survive the ups and downs of life?

Firstly, Chazelle directs wonderfully and Gosling and Stone are radiant in these roles. Emma Stone gives the sort of performance that makes her automatically popular: Mia is warm, funny, kind but also slightly prickly and lacking in confidence about making that big break. Seb is engaging, animated, confident but also slightly distant, standoffish with an intensity behind his eyes. Both actors carry the whole film – this is almost a two hander, as virtually no other actor has more than a few minutes of screen time – and are simply brilliant, capturing that mix of Hollywood magic and real-life tension that the film mixes together throughout its running time.

Very rarely have I seen a film before that I think caught the magic of falling in love as effectively as this one did. The third of the film given to the courtship between Gosling and Stone’s characters is sweet, endearing, heart-warming and rings very true. It has exactly the right sense of tentativeness and uncertainty alongside the natural chemistry between the two leads, that sense of nervousness because you are not sure if the other person is feeling what you are feeling. This portion of the film brilliantly succeeds in getting the viewer to invest in this relationship between the two characters. Chazelle also fills the frame at this point with some of the best Hollywood old-school musical magic: the song-and-dance routines really work here, giving visual expression to the high flung emotions of our heroes (the sequence at Griffith observatory is the obvious highlight here, but the relationship is handled so well that their first date at the cinema beforehand feels overwhelmingly sweet and real). It’s never cloying and for a film that (certainly during this section) is a real confection, that is quite some achievement.

And that’s the first point in the film where it could stop. But this is a film where Chazelle wants to combine the high concept of cinema with the difficult reality of real life. So what this film is really about is not romance but the sometimes painful truth that relationships, for a number of reasons, don’t always work out. That even the most perfect couple can, for reasons of career, ambition or due to just everyday mistakes, end up drifting apart, even if they still remain deeply emotionally attached to each other. What Chazelle does so well is that seeing these two slowly work towards breaking up isn’t traumatising or unbearably sad – it seems natural and real, something almost inevitable. In fact we can all see the mistakes happening, the ill thought out angry words, the events missed, we can see where it is going, but the underlying affection and love between the two characters is still there, so there remains the hope that they will conquer this “sticky patch” as per hundreds of films before.

Chazelle teases us – and there are several moments again where the film could stop that would leave the audience with optimism that a future reconciliation will occur, or that they will rekindle that initial spark. A possible ending is before the five year time jump that covers the final five minutes: Mia and Seb sit after her last audition. Neither of them are sure what will happen next, but both of them confess they will always love the other.

Many films would end here, and we could interpret what will happen next. Chazelle takes us forward five years for a beautifully moving bittersweet coda, where we see both have achieved their ambitions – but not with each other. Mia is married with a young child, Seb seemingly single. Mia finds herself in Seb’s bar on opening night. Their eyes meet across the room and the whole cinema seems to crackle with the emotion – we know in seconds that they still devoted to each other, and regret consumes the room. Seb begins to play their love theme on the piano… Chazelle then gives us a masterful flashback to their first meeting and a wordless, music and dance accompanied replay of the entire film with every mistake corrected, showing them the life they could have had. It’s a beautiful tease – is this a dream? Was the film we watched a dream? Chazelle could leave us at the end of this sequence and allow us to make up our mind. Instead we return to the bar, as Mia leaves. They catch each other’s eyes and smile. It’s a smile that says love, it says happiness for the other but it also carries regret and acknowledgement that they may never see each other again. It’s a beautiful moment, profoundly true and moving and perfectly encapsulates our regret for the road not taken.

Chazelle’s La La Land was a passion project for the director, and his passion for it is clear. It’s beautifully filmed, hugely affecting, and the song and dance moments will put a smile on your face as well as being moving. Your response to it will be affected by how you respond to the mixing of Hollywood glamour with kitchen-sink reality. My wife Cate was jarred by the fact that the film seems to promise the happy ending that old-school musicals so regularly delivered, but then inverts the concept at the end. I, however, found the ending perfect, and the bittersweet sadness of the road not taken in life (a life where other dreams and ambitions are achieved) very moving.

It’s a film that asks us to question our decisions and place values on dreams and ambitions. I’d need to see it again to decide how successfully it does this: in the real world Mia achieves her dreams and is unwilling to sacrifice them to be just a partner to Seb. In the dream sequence, Seb drops his dreams to support Mia, and the film may be suggesting that two ambitious people in a difficult world like this will struggle to be mutually successful. However, it is also clear that one of the things drives Mia away from Seb is his own drift away from immediately pursuing his dream, by signing on for years of touring with a band playing music he hates. What is the message here? Is there a message? Or is the message that life is never clean, never easy, and that having dreams in an adult world will always complicate lives? It’s a question I look forward to addressing when I watch this wonderful film again. It’s too early to say if this is a classic, but it will do until the next classic comes along.
Email ThisBlogThis!Share to TwitterShare to FacebookShare to Pinterest
Labels: 2016, Damien Chazelle, Emma Stone, Finn Wittrock, JK Simmons, John Legend, Musicals, Rosemarie De Witt, Ryan Gosling