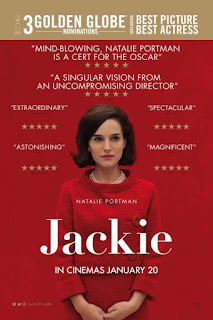 
And tell it strong and clear if he has not,


That once there was a fleeting wisp of glory


Or so sang King Arthur in Alan Jay Lerner’s musical Camelot. It’s apt as it’s a musical cue Jackie returns to several times in this thought-provoking, if rather stately, film that with one eye looks to sharply critique the legend building of American political history, while with the other staring with adoration at the very legacy at its centre.

The film follows, in a slightly non-linear fashion, the period of time from Kennedy’s assassination through to his state funeral and Jackie Kennedy’s departure from the White House (although other scenes feature Jackie during the presidency, most notably her filming of A Tour of the White House in 1962, a TV special the film lovingly recreates with a mixture of existing and newly-created footage and audio). The framing device is an interview Jackie gives with an unnamed journalist, set after the events of the film, in which she alternates between frank honesty and careful legacy building – all the time stressing she will decide what is, and is not, printed.

The film is a both a careful deconstruction of legacy building and a celebration of it, with Jackie Kennedy portrayed as a contradictory figure – keen to give her husband a place in history and, at times, resentful of the impact of public interest in her life. In a neat scene, Jackie Kennedy asks the driver of her husband’s hearse if he has heard of the last two Presidential victims of assassination, William T. McKinley or James Garfield. He knows neither. When asked if he has heard of the first, Abraham Lincoln, he of course is able to name check victory in the civil war and the abolition of slavery. It’s a sharp reminder of the work she must do for her husband's legacy, with his achievements ranking nowhere near Lincoln’s.

The films suggests throughout that the planning of the funeral was focused on giving Kennedy (and by extension Jackie and her children) a permanent place in American folk-lore. It’s why the reprise of Camelot works in the film – it's sums up the attitudes of America an administration that has indeed lived on as a short time of hope, with Kennedy as the lost Golden Boy. The appropriateness of the song is something the film manages to both use and comment upon - and which it also manages to make feel fresh, despite the fact the "Camelot" has been a nickname for the Kennedy White House ever since the 1960s.

Simultaneously, though, it is a film that lingers with wide-eyed wonder on JFK himself, and which presents LBJ as a far more corrupted and overtly political figure compared to the reverence the film feels for his predecessor (his serial womanising is given only a brief mention by Jackie during her conversation with her priest). Kennedy (played by an actor with a remarkable physical and vocal similarity) is always a romantic figure, his motivations or his achievements very rarely questioned. He's filmed like the very romantic hero, which the film is half encouraging us to question that he was - and I'm not sure this is deliberate.

The film is acute and quietly non-judgemental throughout the scenes covering the assassination, reaction and funeral plans. So much so, that the framing device of the journalist (Billy Crudup in a thankless part, scruffily dressed, alternately arch and adoring) seems like it belongs in another, dumber, movie – as if we needed Jackie to give voice to her feelings, to actually speak words stressing her power and determination in shaping what is printed about her husband, in order to understand it. It’s an obvious, TV-movie framing device that really adds very little.

This is largely because Natalie Portman gives such a sensational performance in the lead role. As to be expected, it is a brilliant capturing both of Kennedy’s vocal and physical mannerisms. But more than that, it is also a sharp performance of deeply confused grief and guilt over her husband’s fate, mixed with a public strength (at times bordering on furious anger) in her determination to plan a funeral she felt befitted her husband’s status. Weak as the journalist scenes are, she dominates them with her skilful portrayal of a woman split between a need for intimate confession and determination to maintain control over the story.

Portman’s performance also provides the emotional anchor to scenes that could otherwise be careful reconstructions. The assassination itself (filmed within the car) has rarely seemed so immediate – and the camera largely sticks with Portman’s stunned, terrified face throughout the long drive to the hospital. Her combination of lost alienation, bewilderment and shock equally dominates the rushed inauguration of Johnson, while scenes of her returning to the White House to finally remove her blood-stained clothing shimmer with emotional intensity. It’s a film that captures the stunned sense of alienation from reality that comes after undergoing any major, life-changing event.

The film has a ghostly, elegiac mood. Larrain uses rather murky photography effectively throughout the film. The slightly grainy focus given to the general world of the film allows sharper primary colours to stand out at key moments. The Oscar-nominated score for me was, however, far too insistent – a series of sharp notes and discordant sounds mixed with mournful refrains. It draws too much attention to itself and makes the same point too many times to be effective. I suspect its a score that might work better in isolation. Far better are the quiet and controlled shots of Jackie walking listlessly through a deserted White House, or the careful mixing of the tragic and the mundane (when selecting a positon in Arlington for her husband, she has to ask a companion to slow down as her shoes keep getting stuck in the mud).

It’s an intelligent, thought-provoking and adult piece of film-making, that carefully avoids passing judgement or making pronouncements. I can’t decide if it’s a film that can’t make up its mind about events, or if it challenges us to make up our mind for ourselves. Either way, Portman gives an extraordinary performance and is well supported by the rest of the cast, in particular John Hurt who gives a charming, witty performance as the Priest who Jackie allows herself (for a moment) to be completely honest with. A dynamic and interesting addition to JFK films, that manages to find a new angle and even some new ideas from well-worn ground.
Email ThisBlogThis!Share to TwitterShare to FacebookShare to Pinterest
Labels: 2016, Beth Grant, Billy Crudup, Biography, Greta Gerwig, John Carroll Lynch, John Hurt, Max Casella, Natalie Portman, Pablo Larrain, Peter Sarsgaard, Richard E. Grant