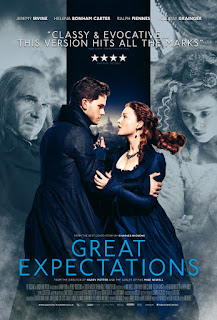 There is one major problem with Mike Newell and screenwriter David Nicholl’s faithful adaptation of Great Expectations, one of Charles Dickens’ best loved novels. It’s such a faithful adaptation that it largely fails to say or do anything unique or interesting with the actual source material itself. Thus it basically joins the parade of adaptations of this novel on film, struggling to define itself from the competition.

For those who don’t know the story: young Pip has two defining encounters in his childhood. One is with escaped convict Magwitch (Ralph Fiennes), to whom he provides some help; the other with eccentric, secluded spinster Miss Havisham (Helena Bonham-Carter), who brings him in as a playfellow for her ward, Estella. As a young man, Pip (Jeremy Irvine) finds himself coming into “great expectations” from a mysterious benefactor, and moves to London where he encounters Estella (Holliday Grainger) once more.

Nicholl’s screenplay is a careful ticking off of all the events you would expect to see from either the book or previous versions: “I’m hungry boy”? Check. Mrs Joe? Check. Boxing with young Herbert Pocket? Check. Jaggers and Molly? Check. Wemmick, the Aged P and the cannon? Check. Bentley Drummle? Check. Joe Gargery in London? Check. Fire? Check. And so on, and so on. What’s really missing from the film is any sense of identity, any sense of a story it wishes to tell, or angle it wants to take on the source material. Instead it’s a picture book accompaniment to the novel. A beautifully filmed one, I will say (John Mathieson’s photography is lavishly good, and brilliantly captures the wide-open spaciousness of Kent compared to the dank, claustrophobic confines of London) but still a picture book.

It’s also decently acted throughout, with Jason Flemyng a stand-out as a decent, kind and loveable Joe (a part I think it’s almost impossible to fail in). Robbie Coltrane makes Jaggers a creepy charmer. Helena Bonham-Carter is, as one reviewer said, “almost too perfect casting” as Miss Havisham – her performance is a bit too familiar as a remix of her parts in Tim Burton films and Bellatrix Lastrange – but she is still very good in this role.

The closest the film gets to putting a twist on the novel is to front and centre the love-story angle between Pip and Estella. Even this, though, is not completely successful, largely due to time. Irvine and Grainger are fine performers (Grainger in particular does an awful lot with what can’t be more than 10-15 minutes of screentime), but adult Pip and Estella don’t have a scene together until halfway through the film. The film also is reluctant to lose anything major from the Gargery or Magwitch plotlines, meaning these get equal weighting with the Estella scenes. It’s possibly the only area where this adaptation is weaker than the BBC adaptation of a few years later, which effectively repositioned the story with a focus on father-son relationships, adding greater prominence to the Pip-Gargery-Magwitch relationships.

Mentioning that BBC adaptation makes a key point about the lack of individuality this production has. Casting my mind back to it, I found it very hard to remember or distinguish the differences between the two – both looked very similar, took similar decisions and featured similar casts. In fact, it became very hard to remember who was in what – an internet search for images for this film throws up plenty of images of Douglas Booth from the mini-series. It’s a small point, but I think captures the lack of uniqueness about this film.

I’ve been very hard on this film, which I feel a bit bad about as it is a very watchable and loyal adaptation and a perfect entry point for Dickens. It also has, in Ralph Fiennes, one superb performance. Of all the versions of Magwitch on screen, this surely has to be the best. Fiennes has the physicality and danger the role needs, but he also has an ethereal, almost child-like quality to him. You can believe this is a dangerous man, but also understand how he can be so passive and easily led. Fiennes’ Magwich takes a delight in the seeing the pleasures of others and has a sweet dedication to his own codes of loyalty. It’s a terrific performance – and actually emerges as the one unique and defining thing the film has to offer.
Email ThisBlogThis!Share to TwitterShare to FacebookShare to Pinterest
Labels: 2012, David Walliams, Dickens, Ewen Bremner, Helena Bonham Carter, Holliday Grainger, Jason Flemyng, Jeremy Irvine, Literary adaptations, Mike Newell, Ralph Fiennes, Robbie Coltrane, Sally Hawkins