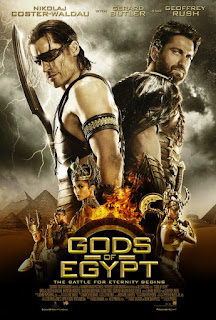 Oh good lord where to begin. It's not so much that this is a terrible film - although it is. It's not offensive or unpleasant. It's just a film that is almost impossible to take seriously whatever. It's a fat, bloated, overblown mess where the plot makes almost no sense, the design is totally ridiculous, the acting bored or unengaging, and the directing totally lacking any charisma. It's a film you can only laugh it, except for the fact that it's so lamentably badly that it's not even that funny. There is so little joy in the making of this bloated fart of a picture, that even as a joke it falls flat.


As far as I can tell, in a fictionalised ancient Egypt the Gods live among men. Horus' coronation as the new king is interrupted by his uncle Set who seizes the throne, removes Horus' eyes and sets about turning the realm into a dictatorship. He has some sort of overall plan but I'm really not sure what it was. Something to do with immortality or something. The film barely cares so neither should you. Set is a baddie. Horus is supposed to be a goodie, I guess, but he is such a humourless, arrogant, cold and (above all) boring God you probably won't give a toss about him.

The film is a disaster almost from start to finish. In a decision that guarantees giggles every few minutes, the Gods are all 9 feet high, making the humans look like chippy midgets. Poor forced perspective hammers home this ridiculousness every few seconds. If this didn't make the Gods silly enough, they also have some bizarre metal "battle modes" they transform into, which along with some piss poor special effects makes them look like refugees from Mighty Morphin Power Rangers. The colours are bright and primary and the sets all have the sheen of CGI, lacking any substance. The design decisions cross swiftly from daring into dumb. If you ever wanted to see a flying chariot pulled by winged scarabs or to see mix and match female hitmen ride giant worms chasing a giant and his normal sized friend, well hallelujah your day has come, this is the film for you.

The script, such as it is, is a loosely connected series of incoherent events. The acting is simply awful. Coster-Waldau completely lacks the big screen presence to carry the movie, his upper crust arrogance from Game of Thrones here comes across as insufferable and dull. Thwaites comic relief is about as funny as a hernia and his quest to save his true love has all the drama of running to catch a bus. Boseman aims for wisdom and grace but delivers camp and affectation in a truly terrible performance. Butler does at least have a bit of charisma, even though Set is such a poorly defined character he's impossible to get interested in. Various other actors chip in autopilot performances for the cash. The female characters are little more than props. Geoffrey Rush needs a new agent: seriously how much money does he need?

The biggest problem though is it isn't quite ridiculous, campy or shite enough to be a camp classic. Instead it's just boring. It doesn't have the sort of cosmic sweep or visual splendour to give you something to look at. Instead it's loud, boring and stinks like animal droppings. That's the worst thing of all: not even as a camp classic will this be remembered. Simply crap.
Email ThisBlogThis!Share to TwitterShare to FacebookShare to Pinterest
Labels: 2016, Alex Proyas, Benton Thwaites, Box office bombs, Bryan Brown, Chadwick Boseman, Geoffrey Rush, Gerard Butler, Nikolaj Coster-Waldau, Rufus Sewell, Terrible Films