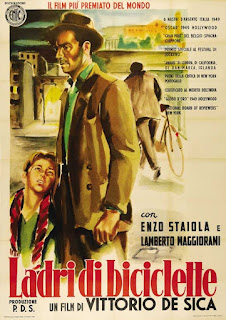 Sometimes the simple stories are the best, and I don’t think you can get much simpler than this: Man loses bike. Man searches for bike. Man doesn’t find bike. This film is a perfect little fairy tale, a wonderfully moving family story, perhaps one of the best “father-son” films placed on film. Who could resist the patience and understanding the son has for the father – and who can fail to be moved by the son’s disappointment with the father, or his eventual forgiveness for the father’s failings. Because the father himself is a failure – yes he is a victim of the economic system, but he is also a strangely passive, ineffectual man barely able to help himself.

In post-war, recession-hit Rome, jobs and income are at an absolute premium. Antonio (Lamberto Maggiorani, an amateur actor who barely worked again, unable to escape the shadow of this role) is offered a job pasting up Rita Hayworth posters (could there be a bigger contrast between glamour and squalor in the movies?). There is one condition: he must have a bike. With a sign of his later ineffectiveness, Antonio claims he cannot accept the vital job due to pawning the bike. Not standing for this, his wife pawns all the bedding in the house to reclaim the bike. Antonio heads to work but within less than half a day his bike is stolen. Accompanied by his son Bruno, Antonio searches for the next two days through Rome for the bike.

De Sica’s film is the most famous of the films from the neo-realist movement. This movement aimed to make films entirely on location, using only non-professional actors, aiming to present the real world on camera within the framework of the stories told by cinema. De Sica certainly manages to capture the sense of post-war Rome: a parade of dingy streets and untidy squares, with debris and rubbish at almost every turn, weeds punching through steps, and crowds of working class Romans a constant presence.

The beauty of using De Sica’s realism is that we get a real sense of how important this bicycle is – the presence of so many people almost begging for this job means the audience knows that this bike is absolutely crucial. De Sica even teases us – we know the bike is going to get stolen, it’s in the title – by having Antonio leave the bike unattended at least three times before the thing is stolen. Personally, I felt very tense whenever Antonio let that bike out of his sight, practically begging De Sica to allow at least the camera to keep an eye on it. The documenting of poverty before this is beautifully done – not overplayed I hasten to add, but a gentle, uncommented-on present. There is a beautiful shot of the pawnbrokers, where the bedding is deposited – the pawnbroker literally climbs up a mountain of pawned bedding, a quiet visual testimony to the fact that this is a story that has been told several times over away from the movie camera.

The heart of the film, though, is the relationship between Antonio and his son Bruno, both beautifully played. De Sica keeps the visual poetry of this relationship throughout – Bruno is clearly full of love for his father, as his father is for him, but their relationship is not completely easy. At one point Bruno falls in a puddle – Antonio literally doesn’t notice. This is a neat shadowing for their argument later in the film, and Bruno’s tearful reaction to a slap. Later when Antonio fears Bruno drowned after a separation (he’s not!) his despair and panic speaks volumes for his love – but even their reconciliation is undermined by Antonio being sucked back into self-pitying despair, Bruno patiently setting his meal aside to listen (and perform some mental arithmetic) for his father.

The final sequence of the film brings all these themes to the fore brilliantly: Antonio finally considers stealing to replace his long lost bike. Carefully he sends his son away, too ashamed to have his crime witnessed – but like everything else in the film he attempts, Antonio bungles it. As our heroes depart and disappear in the crowd, Antonio is distracted and fighting tears – but Bruno takes his hands in a perfect moment of acceptance and forgiveness.

This is a quest film, very moving but in a way almost a slight of hand. A policeman tells Antonio from the start his search is hopeless – and the audience know it must be hopeless (finding a bike in Rome? Come on!) – but De Sica makes us hope, makes us believe it might be possible. It’s a tribute to how real the characters feel that the viewer is desperate for them to find this precious bike. And a testament to the beauty of the film that they can fail to find it and still be very moved by the film.
Email ThisBlogThis!Share to TwitterShare to FacebookShare to Pinterest
Labels: 1948, Enzo Staiola, Italian Film, Lamberto Maggiorani, Neo-realism, Vittorio de Sica