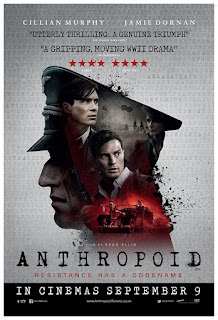 Reinhard Heydrich, Head of the SD, Reichs-Protector of Bohemia and Bavaria (the new German name for Czechoslovakia) and the architect of the Final Solution, was the only leader of the Nazi party to be assassinated by Allied forces during the Second World War. In revenge for his death, German soldiers destroyed the town of Lodz, executing the entire adult male population and sending the rest of the population to concentration camps. The reprisals eventually numbered over 5,000 people.

Anthropoid was a box-office disappointment when released. Personally I think a large part of this was connected to its terrible title. Anthropoid is a word that means nothing to people watching and gives you no idea what the film is about – it sounds more like a sci-fi film than anything else. It’s also a film without big-name stars, with a fantastically downer ending, and about an event many people have not heard of. It’s a shame though, as this deserved an audience.

It’s a tense, tightly structured film, sharply directed, that has events as its primary momentum over character. The characters in the film are primarily defined by their purpose within the plot. Saying that, there is scope allowed for characterisation. Cillian Murphy’s Gabčík begins the film as a man who believes himself willing to sacrifice anything for the cause. However, when the losses begin to happen, he is the man who most quickly succumbs to anger and sentiment. Conversely Jamie Dornan’s Kubiš begins as hesitant about the taking of lives, but becomes the most effective soldier among the group.

The film is actually fairly even-handed in its portrayal of the resistance members, not afraid of showing that they were not always a unified group willingly sharing a purpose. Many of the members of the resistance are hesitant about the effect the plan will have on their already decimated ranks. Others, such as Harry Lloyd’s Opálka seem almost obsessively dedicated to their duties as soldiers, at the expense of any other considerations. Even the eventual traitor is shown to be motivated at least partly by fear for the fate of his family. Similarly the film is not afraid to show the somewhat haphazard planning of the assassination, or its bungled execution (expertly reconstructed).

There is a definite mood shift after the assassination. If the first half of the film is a subdued men-on-a-mission tale, the second half is a brutal depiction of the onslaught of retribution. Ellis’ direction is crisp, taught and unflinchingly truthful, recording the actions of the police state with honesty and no sensationalism – from doors kicked in to some brutal torture scenes (the torture of one character in particular is tough to watch, without ever being graphic). The final stand of the assassins in the church is similarly brilliantly filmed and difficult to watch, a blazingly tight and bloody display of gunplay and violence, in which doomed men determine to take as many of the enemy down with them as they can.

However, as it goes on, I think the film becomes so seduced by the courage and bravery of its characters, that it stops questioning the value of their actions. From the start, many members of the Czech resistance are shown to question the worth of the plan when balanced against likely reprisals. This is an issue the film loses sight of in its second half. It is not completely surprising, considering the immense bravery of the assassins during their final stand, that the film doesn’t wish to undermine this by probing the reasoning behind their actions. But it’s a point that needs to be made and the film, in the end, dodges it: was killing Heydrich worth sacrificing 5,000 innocent Czechs in return? I’d argue probably not. The allies at the time certainly decided it wasn’t – no other attempt would be made to assassinate a leading Nazi during the war – and the question needed to be asked more in  this film. Killing Heydrich didn’t stop anything he had set in motion and had little overall impact on the outcome of the war.

Instead the film ends on a note of optimism, stressing Heydrich’s vileness and the fact that the successful assassination made the Czechs more recognised as members of the Allies. It is understandable, considering the tragic ending of the film, that its makers didn’t want to end with any doubt about the righteousness or value of their actions. And there is no doubt that Heydrich deserved his fate. But the film avoids truly addressing the collateral damage to the Czech population. It’s a single question mark over other an otherwise gripping and tense dramatisation.
Email ThisBlogThis!Share to TwitterShare to FacebookShare to Pinterest
Labels: 2016, Anna Geislerová, Bill Milner, Charlotte Le Bon, Cillian Murphy, Harry Lloyd, Jamie Dornan, Sean Ellis, Toby Jones, World War Two