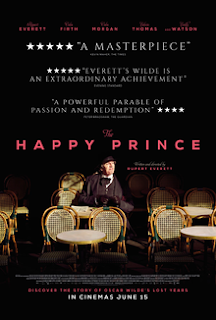 Rupert Everett has long felt an affinity for Oscar Wilde. He saw Wilde as one of the first great martyrs of the gay community, sacrificed early to the hypocrisy of conventional society (who loved everything about this flamboyantly camp, witty man right up until they found out what he got up to in bed). He spent ten years trying to find the money to film his script about Wilde’s final days in exile in Europe. (Everett eventually recounted all this in a book, To the Ends of the Earth).

The final end result is a well-made, interesting, decent film that doesn’t reinvent the wheel or radically change our perceptions or knowledge of Wilde – but does plenty of credit to Everett. He directs with an assurance and a surprising amount of visual flair. The film is attractive and uses urgent, hand-held camerawork with a great deal of skill, giving even the most basic scenes a real spark of life. There are some intelligent and intriguing visual cuts and transitions and he gets good work from the cast (Firth, an old friend, loyally did the film for nothing to help it get made). There is enough here to make you keen to see Everett have a go at another film (although I suspect, from reading the book, that’s highly unlikely to happen).

Everett also plays the lead role, and that’s the film’s main interest. He honed his performance as Wilde after the best part of a year on stage (to huge acclaim) in David Hare’s The Judas Kiss. Not to mention Everett has a natural affinity for Wildean dialogue, having proven on several occasions that maybe no actor alive better captures Wilde’s wit and pathos. His Wilde is a shattered husk, slowly realising over the course of the film that his life is effectively over. This happens not so much as a raging against the light, but the slow deflation of a man who died at a very early age (barely mid 40s), collapsing into depression, alcoholism and repeating the same mistakes over and over again.

The most prominent of those mistakes being taking up again with his lover (and root cause of his disgrace the first time) Bosie, played here with preening, incandescent selfishness by Colin Morgan. During a long sojourn in Naples, these two flirt, fight and fuck until the money runs out – like an appalling unfunny screwball comedy couple who keep being dragged back together because fighting each other is better than talking to anyone else. Bosie then turns up in floods of tears at Wilde’s grave – having cut all ties with him or face disinheritance, fobbing him off with a few hundred quid of “thank but piss off” money.

Wilde’s loyal friends stick by him – but in that typical blinkered way we sometimes behave when we are in love, Wilde oscillates between being sickeningly dependent and dismissive of them. Everett isn’t afraid to make Wilde often preening, sponging, selfish and deluded or to stress how easily his wit and intelligence could be turned cruel. Edwin Thomas is heart-breakingly earnest as Wilde’s devoted friend Robbie Ross while Firth gives sterling support as the equally loyal Reggie Turner.

The film follows Wilde into some pretty dark places and plays some quite daring cards when exploring Wilde’s psyche. Everett plainly shows Wilde deeply regretted the end of his relationship with his children, and the damage he caused them. But he isn’t afraid to show him taking on potential substitutes for them in a teenage boy and his prepubescent brother – while still paying for sex with the older brother (eagerly pimped by his street-smart younger brother). Despite this there’s something very sad about Wilde settling down to tell these kids the same stories he told his own. Or his gentle longing for the family he left behind that we hear in his voice when he sees them.

Where the film is strongest is in showing the prejudice and rage Wilde met and the suffering he endured. Wilde is spat at, chased through the street by drunken poshboys on tour (finally physically confronting them in a church with a foul-mouthed fury), threatened and generally treated like dirt by nearly everyone of any social standing. Scenes of him at his pomp show the same traits now treated as disgusting signs of his sexual preference, were celebrated as evidence of his charm. The Happy Prince has an angry and rage to it that I almost wish Everett had committed to more.

Saying that, it’s shot and edited with such pace and urgency that the film still works. If at the end it never quite coalesces into a clear message, it’s still a fine tribute to Everett’s efforts to bring it to the screen. And his own performance is a marvel – beautifully judged, empathetic but not hagiographic, critical but sympathetic, funny and also moving, angry but gentle. Its best legacy is the opportunity Everett the actor is given by Everett the director (as he confesses in the book one of his principle reasons for writing the script in the first place) and if the film is a little too much of a one-man showcase, it still has plenty of interest to it.