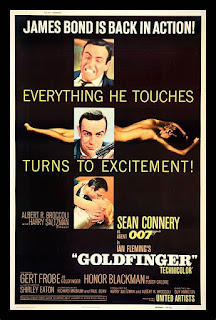 It took three films, but Goldfinger was when they got the James Bond formula spot-on. So spot-on, that all the James Bond films that followed would employ elements introduced here. This is where we got for the first-time: the pre-credits action sequence, Q, a gadget filled Aston Martin, a bizarre assassination tool, a villainous henchman with a bizarre skill, an outlandish scheme and Bond delaying being saved at the end for a few more moments of rumpy-pumpy. It’s Connery at the height of his powers, has a knock-out song, one brilliant sequence after another and marks the moment where Bond wisely severed any connection with the real world, like a laser slicing through gold towards our hero’s crotch.

On vacation in Miami, James Bond (Sean Connery) has a run in with Auric Goldfinger (Gert Fröbe), gold bullion millionaire and card cheat. During this his romance with Jill Masterson (Shirley Eaton) is cut short when she is killed by being covered completely in gold paint (a fatal case of the not-actually-real ailment “skin suffocation”) by Goldfinger’s silent steel-rimmed hatted manservant Oddjob (Harold Sakata). Bond is hungry for revenge when he is tasked by M (Bernard Lee) to find out how Goldfinger is smuggling Gold bullion. He finds out Goldfinger has an even more fiendish plan in the works, involving Chinese agents, a nasty gas, an all-female flying circus headed by Pussy Galore (Honor Blackman) and the US gold reserve at Fort Knox.

Goldfinger was a massive hit and pretty much lands somewhere near the top of any poll of the greatest ever Bond films. That’s because it’s just a massive explosion of cool fun. It’s exciting, funny, perfectly paced and has one scene after another that are so perfect, Bond films for the next fifty years would more-or-less repeat them again and again (taking it even further, A View to a Kill is virtually a remake of Goldfinger and even Quantum of Solace has a homage to death-by-gold-paint). Goldfinger takes place in a heightened reality of thrills and spills – unlike From Russia with Love or Dr No there is not even the slightest pretence espionage might work something like this – and barrels along with such pace and momentum it becomes a thrill ride you don’t want to get off. 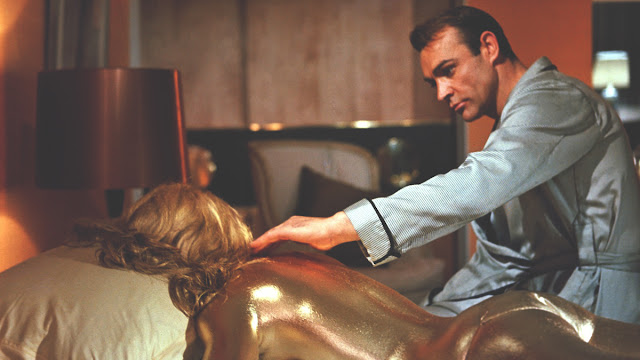 The plot is actually rather close to Fleming’s original. Goldfinger’s plan has been tweaked, but the film still finds time for the classic “Bond takes on the cheating villain at a gentleman’s sport”, with Bond duelling with Goldfinger in a round of match-play golf (I like to think this is where Connery’s real-life obsession with the sport began, cunningly swopping the cheating Goldfinger’s ball on the final hole for default victory). But the film adds a playful, tongue-firmly-in-cheek quality. It manages to mix thrills with not taking itself too seriously, becoming a grandly entertaining thrill ride.

The re-working of the elements of the novel for the screen created an indelible template for Bond. Oddjob became a walking icon, his shadow instantly recognisable, invulnerable with a killing method – a steel rimmed hat he throws with Olympian accuracy – that’s a perfect mix of just-about plausible and utterly ridiculous. And also, of course, perfect to playfully imitate a home. What you can’t imitate is bombing around hill roads in a gadget-stuffed Aston Martin, but you can dream. The car chase is not only a show case for cool driving, it also lets you see each of the super-cool enhancements introduced by Q one-after-another (a pattern the series would follow time and again whenever a gadget-stuffed car appeared) and hammers home Bond’s super-cool confidence.

Connery was of course perfect for conveying that. In Goldfinger he was still interested, clearly enjoying some of the best quips he got as well as just enough acting challenges – from Bond’s sad regret at anger at the death of no less than two Mastersons, to his terror at the prospect of being unmanned by a laser. That sequence has of course gone down in film history – from the striking image to the classic exchange “You expect me to talk?” “No Mr Bond I expect you to die!” – but a lot of it is sold from Connery’s desperate search for the right words to turn that machine off. Connery is cool but still just about vulnerable, cunning, smart and witty but also human. Who wouldn’t want to be so unshakeably cool that he can emerge from a wet suit (with a model seagull on his head!) unzip to reveal a tux, light a nonchalant cigarette while a factory explodes behind him, seduce a woman and then off a killer with a bathtub and a heater (“Shocking!”) – and that’s just the first five minutes! 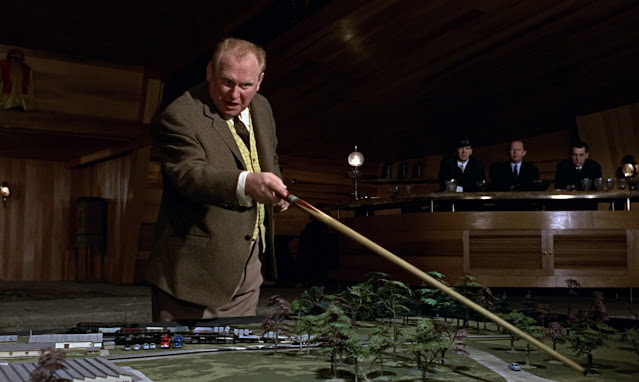 Every scene in Goldfinger is a doozy. The playful cool of Bond outsmarting Goldfinger in Miami then getting his comeuppance (Connery is so cool in the film btw you forget that Bond is such a staunch conservative, he cheekily disparages the Beatles – that other icon of Swinging Sixties Brit Cool – to Jill as casually as he offs villains). That golf game in Kent (capped by a decapitated statue). Hillside driving with Tilly (with extra dodged bullets). Late night gadget-filled car chase. The first meeting with Pussy Galore (“I must be dreaming…”). Goldfinger’s briefing (his offing of all the attendants makes the whole thing even more funny, since its clearly just Goldfinger enjoying a bit of showing off). Bond dragging a nuclear bomb around an epic Fort Knox set. Oddjob surviving everything but a million volts. Goldfinger earning his wings in the film’s climax. It’s all terrific.

And it all works because it’s got the balance spot-on between cartoon and reality. You can see it come together in Ken Adam’s set for Fort Knox: the inside was all made up (no one would stack gold that high!) but people believed it was the real thing, because it felt like the Fort Knox we should have. Goldfinger is a scowlingly wicked villain, with a little kid’s delight in his own naughtiness. Honor Blackman doesn’t appear until the film is halfway through, but is an assured, forceful, brilliant presence, more than a match for Bond (we’ll gloss over the slightly dated way Bond seems to ‘convert’ her from implied Lesbianism to – well perhaps bisexuality). The briefing sequence with a grumpy, unimpressed Q was so good Desmond Llewelyn would essentially repeat it another 13 times (only OMHSS and Live and Let Die would skip the “Now pay attention 007” sequence between this and TWINE). All of this has the bright, primary colour fun of a rollicking graphic novel.

You can watch Goldfinger about a million times – and anyone who has written a Bond film probably has, it was such a template for the next seventeen films that followed – and it would still thrill, excite and entertain you. Connery’s interest after this went downhill, and the magic wasn’t always recaptured – but this when Bond went from being a cool spy to a cultural phenomenon. Bond became the box-office franchise that would dominate cinemas for decades, the ultimate spy caper that others would be compared to. Goldfinger mixed silliness and seriousness perfectly, thrills and laughs, action and comedy. It’s a superb and hugely influential film. It’s one of the Best Bonds ever: it clearly has the Midas touch.