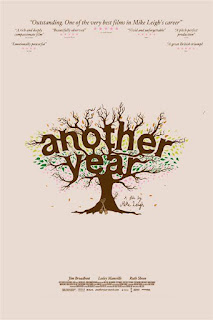 Tom (Jim Broadbent) and Gerri (Ruth Sheen) are a blissfully content middle-class London couple. He’s a successful geologist, she’s an attentive NHS counsellor. They divide their time between work, their allotment and socialising with friends. But many of their friends are disaster zones. Gerri’s work colleague Mary (Lesley Manville) is a divorcee who falls over herself to tell people how happy she is, but is clearly depressed with a drink problem. Similarly, Tom’s old uni friend Ken (Peter Wight) is a lonely alcoholic, seriously overweight and equally depressed.

The fascinating question at the heart of Mike Leigh’s heart-felt and beautiful film is: are Tom and Gerri a sweetly loving couple who go out of their way to support friends – or are they a desperately smug pair, facilitating those around them in self-destructive patterns? It’s hard to say either way: and that’s the beauty of Leigh’s honest, subtle character study which presents a single year in the lives of these characters.

It’s also, of course, superbly acted by the cast – all of them regulars in the work of Leigh. Broadbent and Sheen are brilliant as a couple completely content and happy in themselves and confident that they essentially have life sussed. They are kind, considerate and supportive of everyone. But how much is this genuine and how much is it performative? They fuss and smile to each other around the depressed and fragile Mary – but do nothing to help her change and improve her life, and merrily continue to fill the glasses of both her and the even more alcohol ravaged Ken.

When Tom’s sister-in-law dies, they rush to support his quiet, reserved brother Ronnie (David Bradley). They arrange every detail of the funeral and do everything they can to remove any burden from him. Tom is furious at the selfish and uncaring attitude of Ronnie’s son Carl (a grimly chippy Martin Savage) who seems convinced he is somehow being cheated by them. They bring Ronnie back to stay with them for a few weeks – but frequently leave him alone or allow him to sit watching their own insular conversations. Sure, they give him a home and support, but do they really care or are they going through the motions of people who want to believe they really care?

Wouldn’t a real friend of Ken, tell the obviously over-weight, permanently drunk, desperately self-loathing man that he has serious problems and help him change his life, rather than refill his glass at every opportunity? Or is it a sign of Tom and Gerri’s decency that they don’t see it as their place to tell other people to live their lives? In addition, Tom sticks loyally by Ken in a way very few people would – its clear during a golf game with Ken, Tom, son Joe (Oliver Maltman) and pal Jack (Phil Davis) no-one else wants Ken there – and gives him more warmth and attention than you suspect anyone else ever has. Does it just not occur to him a real friend would help Ken change his life? 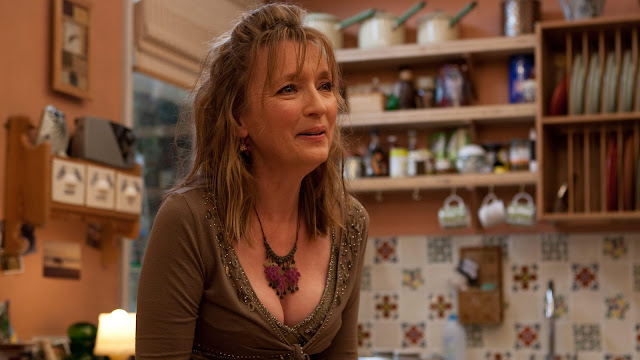 Above all, we see the frantic desperation and all-consuming anxiety, fear and neediness of Mary, played with a heartfelt and deeply moving frankness by a never-better Lesley Manville. Mary is a very sweet woman, who has lost her place in the world and clings to the idea – now long since departed from reality – that she is a young glamour puss, rather than a desperate, divorcee in her fifties. Tom and Gerri support Mary, making her a part of their lives. She is a frequent overnight guest in their house, has known Joe since he was little and relies on Gerri utterly for friendship.

But there is also a slight air of judgement with their treatment of Mary. Does having this all-too-obviously tragic case, this failure who is utterly emotionally dependent on them, make them feel better about themselves? What have they done over the years, for all those sympathetic ears and shoulders to cry on, to help Mary deal with the root cause of problems? While they are willing to listen at great length to her (often tedious and repetitive) conversation, they never once really step into help her effect real change.

Events bubble up as the lonely Mary begins to fixate on a fantasy of her forming a relationship with Joe. It’s implied everyone is aware of this, but politely do their best to hope the situation will go away. Manville is of course brilliant in playing the tragically self-deluded hope under this longing for a never-will-be relationship – particularly as she never once looks down on Mary, but plays with a real empathetic warmth, that helps us feel an immense sorrow for this woman, while still acknowledging she can be deeply frustrating.

And Mary perhaps has more warmth, and ability to connect naturally with people, than Tom and Gerri. This is suggested during a wonderful late scene with Ronnie (a brilliantly quiet David Bradley), where in a long conversation she forms more of a bond of him than we’ve seen Tom and Gerri, for all their patience, ever form. It’s impossible not to relate to Mary as she’s so clearly such a vulnerable person, desperate for love and human connection. Seeing her slow-motion collapse across the film is heart-rending. For all her flaws, she’s someone you are desperate to see happy.

Mike Leigh is able to capture all this in his beautifully observant film, perfectly placed, low-key but deeply affecting. There are never obvious beats and he is willing to show the positives as well as the flaws in every character. He never tips the deck either for or against Tom and Gerri, allowing us to judge them by their actions: they could be warm, friendly, open-house people who stick loyally to troubled friends most people would drop immediately; or they could be subconsciously using these tragic cases to feel even more blissfully happy with their own perfect lives. Leigh never tips it either way, and the breathtakingly emotional performances and beautifully played and written scenes mean that, even though the film is short on plot, it feels rich in character and emotion. It ends with a beautiful held long shot on Mary that, like the rest of this film, is deeply moving but also leaves you with more questions than answers. A triumph.