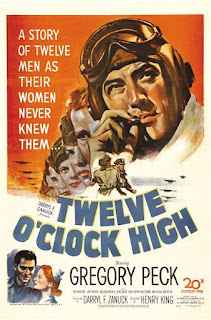 It’s tough at the top. Imagine how much tougher it would be if you job involved pushing people to their limits, and then a little bit further, in a job that puts their lives at daily risk? It’s the sort of burden commanders of American Bomber wings faced during the Second World War. It’s already got to Lt Colonel Keith Davenport (Gary Merrill), a decent guy and much-loved officer, who has grown so close to his men he can’t face sending them off to get killed over Europe any more. He’s replaced by Brigadier General Frank Savage (Gregory Peck), a by-the-book tough son-of-a-bitch who won’t tolerate men who can’t or won’t do their duty. But will the pressure of constant action, escalating casualties and a growing bond with his men also get to Savage?

With Peck at the top of his game, in one of his finest performances of stoical dependability and Lincolnonian authority concealing a carefully nurtured warmth and humanity, Twelve O’Clock High is a very different war film. Here the focus is much less on derring-do and heroism and more on the unbearable psychological pressure a life on the front lines brings. It’s all presented with a documentary style realism – so much so, that the film was used for decades in the USAAF as a training film on successful styles of command.

It’s about the impact that sustained trauma has – how it can make even the toughest man eventually paralysed by over-thinking, uncertainty and doubt. Davenport is a very popular CO – and good in the job in many ways – except the key one: he’s lost the ability to push the men and his willingness to sacrifice them. Essentially, in the nicest possible way, he’s damaging morale by letting the company reflect his own exhaustion, depression and amiable defeatism. He’s lost the ability to push men to want to achieve everything they can for the cause: meaning they are now doing the military equivalent of punching the clock, delivering the barest minimum an attack requires. Mistakes and errors are tolerated and, perversely, casualty rates are rising.

It’s what Savage is sent in to fix. Which he does by essentially blowing apart the cozy, boys-club feel of the Bomber Group. Air Exec, Lt Colonel Ben Gately (a great performance from Hugh Marlowe), is stripped of his command (for not leading from the front) and assigned to commanding the “The Leper Colony” a plane crewed by those Savage believes least likely to pull their weight. Drills are bought in and under-performance is no longer tolerated. Dropping out of formation for whatever reason – a move that puts the rest of the Bomber Group at risk – is punished harshly (a pilot is demoted to the “Leper Colony” for breaking formation to support another a plane, a decision that could have doomed the Group to death). Savage is the ultimate heartless drill sergeant.

Only of course he’s not: as Peck makes clear, the burdens of command weigh as heavy on him as they did on Davenport. But Savage is a professional who knows tough love is what’s going to keep most of the Group alive, accomplishing their missions and bringing the war to an end. And Savage’s policies work: the Bomber Group starts to achieve well above their previous performance. The pilots greet Savage by handing in a group transfer request, but by the time the request is heard by the army (Savage’s adjutant Stovall having delayed the requests with red tape) as a man they back the General. Savage gets then to take pride in themselves and their unit – so much so that, during their first strike on German soil, off duty men smuggle their way onto planes to be part of the mission. (Savage of course doesn’t let slip his pride, rebuking men for abandoning their posts on the base).

Underneath it all, Savage is starting to feel closer to his men. A young pilot, decorated but starting to get worried about flying, is mentored and encouraged by him. Gately responds to the tough love from Savage by aiming to prove to him he is indeed the best pilot in the squadron – winning Savage’s respect, not least when he flies several missions concealing a spinal injury. The pressure inevitably builds on Savage as he finds it harder and harder to maintain his professional demeanour while becoming closer and closer to his men (he even refuses a transfer back to his original job in HQ, as he feels the group isn’t ready for him to leave yet). 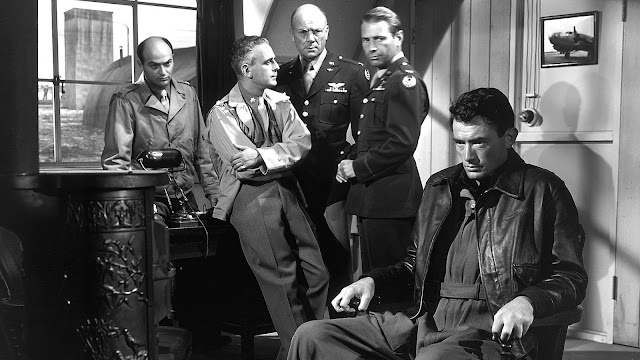 It all builds to one of the most famous breakdowns in film, as Savage goes from physically unable to climb into the cockpit to a confused state on the runaway and then catatonic until the Group returns home. This is beyond daring stuff for a 1940s Hollywood film, a true portrait of the effects of wartime pressure on a hero, which never once questions his competence and cowardice but in fact holds up the qualities that led to his breakdown as admirable ones. Peck plays all this with great power and control – and if Savage shrugs off his catatonic state later and the film doesn’t really explore the long-term impacts, the very fact that it showed someone as admirable, competent and professional as this suffering psychological damage from war was quite something.

It’s not a perfect film. King’s shooting style is often unimaginative and the film takes too long to get going – much of the first half an hour is a slow chug towards Davenport being relieved and Savage taking the post. More could be made of the impact of the war on the rest of the men on the group: it’s telling that only Jagger’s Stovell gets a scene where he also is allowed to let off steam against the pressure, getting drunk the night of a big raid, and he won an Oscar for it. But as something very different in Hollywood’s approach to the War, it really stands out as a companion piece to The Best Years of Our Lives.