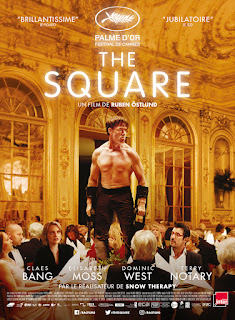 Christian (Claes Bang) has it all. The respected director of a celebrated Swedish Modern Art Gallery, he’s rich, handsome and highly thought of by all. That all fractures when his phone and wallet are stolen in a confidence trick. Using the phone’s tracker, Christian identifies the working-class apartment building its in. In a burst of late-night energy, he writes a threatening letter to the thieves and posts a copy through every single apartment door demanding it’s return. It is: but Christian’s letter has a negative impact on an innocent young boy (Elijandro Edouard) whose parents now believe he must be a thief. Christian is so preoccupied with this he fails to pay attention to a YouTube video created to promote his new exhibition: the video of a homeless child being blown up outside the museum leads to national condemnation.

And that exhibit? It’s called The Square (you see!). Its main feature is a literal square on the floor, marking a safe space where everyone is equal. The exhibit is themed around trust, mutual respect and altruism. Traits which Östlund’s film reminds us time-and-time again his central characters are all sadly lacking in. It’s part of a broad-ranging satire on the self-importance of the Art World and the self-obsession of the upper classes that, while beautifully filmed, comes across as rather scattergun. Putting it bluntly, most of its targets are so obvious, the entire film might as well be footage of fish being shot in barrels.

A film like this, hinges on Christian’s self-perception being clearly shown to be very different from his reality. In effect, we need to see how Christian believes himself to be a decent, upstanding, noble fellow but also be shown he is in fact prejudiced, self-obsessed and vain. While the film does very well to show how shallow Christian’s “nice-guy” image is – he basks in the adulation of colleagues and museum patrons and carefully prepares his ‘spontaneous’ presentations for maximum effect – we never get quite enough of a sense of how he sees himself. His mystique is punctured so early, that the sense of events forcing an awkward confrontation with his true character is not developed.

This takes nothing away from the exceptional performance of Claes Bang, a charismatic and gifted actor who can pivot on a sixpence from huge charm to bullying menace. He’s completely believable as the red-spectacled, scarf wearing aesthete just as he is the sort of bully who’ll push a troublesome kid over. Matey and jovial with his employees, he’s also hesitant on their names and berates assistant Michael (Christopher Læssø) when he gets cold feet about executing his letter drop plan (on top of which, he naturally assumes as Michael is black, he’ll be better at carrying out the plan than Christian). His life is a careful performance, with every moment scripted by him, that fractures into something much messier the instant he loses control. 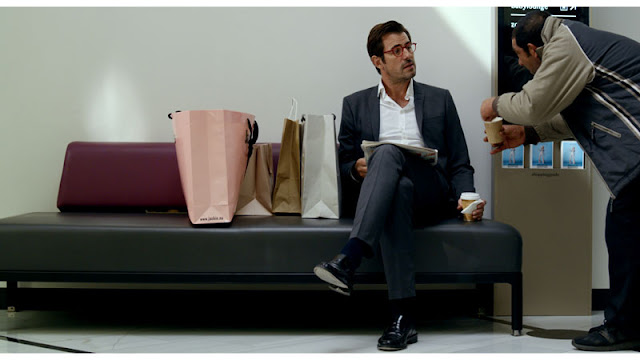 It’s just a shame that Östlund doesn’t delve into the opportunities this presents. He’s more interested in obvious characters like Elizabeth Moss’ Anne, a preening journalist (she inexplicably lives with a Chimp) with whom Christian enjoys a one-night stand, culminating in the two of them bickering over a used condom. (Christian seems worried she’ll pinch his sperm).

Too often Östlund contents himself with simply stating that the upper clases are vain and pre-occupied with their own needs instead of the lives of others. In case we miss this point, the film is littered with shots of beggars. It even opens with the camera focused on a beggar sleeping on the street in broad daylight while, off camera, a passionate student pushes leaflets urging people to do more to help the homeless while passers-by express irritation or disinterest to them. You see! Even the campaigner is more interested in virtue signalling than actually helping people! Interactions with beggars pepper the film: Christian is annoyed by one beggar not being grateful enough when he condescendingly offers to buy them dinner to get out of an awkward conversation with them and then later pays another to guard his shopping when he takes a phone call.

This social satire runs in parallel with a scathing-but-rather-obvious series of jokes at the expense of the preening self-importance of the Art World. The exhibition, The Square, is treated as if it’s the second coming but, other than parroting the Artist’s written vision, no one (not even Christian) seems interested in engaging in it or really has a clue what it is trying to do. The most important part of Christian’s role is in fact attracting money from rich patrons, who ooh and ahh over the art but have nothing whatsoever to say about it. The art itself is a parade of cliches – although there is a very funny recurring joke of an installation that is a series or piles of ash on the floor which the museum cleaners inadvertently slowly reduce each night.

The unwillingness of people to rock the boat in social situations is also parodied. Dominic West cameos as an American artist whose Q&A is constantly disrupted by a man with Tourettes – the discussion collapses but no one knows how to even to begin to manage the situation. This culminates in the film’s showpiece (and best scene). A Russian artist whose ‘art’ is to impersonate a monkey (played by motion-capture guru Terry Notary), performs an installation at a fund raiser dinner. The guests (and Christian) sit in increasingly awkward silence, no one willing to take the first step to intervene, as the artist progresses from humorous monkey noises to increasing acts of intimidation, violence and finally sexual assault.

It’s all interesting stuff, but it all feels a little too obvious. The advertising reps bought into design the video are such cliched social media obsessives they feel like sitcom characters. The juxtaposition of The Square’s idea that “everyone inside the square is equal” with the reality of no one being equal is made time and time and again with reduced impact.

Östlund finds a host of squares (stairways, windows etc) to frame Christian in visually to hammer this home. He makes frequent use of one-sided two shot set ups (meaning we only focus on one character during a conversation or exchange) which helps further drill down into that character’s psyche and stress their distance from whoever they are talking to. But it’s a lot of flash on an otherwise rather obvious and self-satisfied film, which never makes as many new and original points as it thinks.

If it’s a stunning realisation to you that people have a tendency to be self-obsessed, that the Art world is as much about posing and money as it is art and that social awkwardness will stop people intervening in the most disastrous circumstances, this is the film for you. Otherwise, you might find little real insight here.