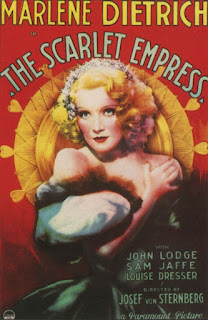 Did von Sternberg have a bet on when he made this film? “Hey Josef, what’s the maddest film you think you could make and get away with?” Either that, or perhaps he didn’t care anymore and decided his own obsessions with visuals, sexuality and Dietrich were more important than anything else. Regardless, he made The Scarlet Empress, perhaps one of the most bizarre major releases from a 1930s Studio, a sort of camp masterpiece that contains things you just won’t see any in other film, but at the same time is a disjointed, barely plotted ramble through a fable-tinged version of Russian history. Either way, it’s a truly unique film – and how many films can you say that about?

The plot loosely follows the rise of Catherine the Great (Marlene Dietrich) to power, but any resemblance to real people (living or dead) seems to be purely coincidental. Catherine arrives in Russia to power the heir to the throne, Grand Duke Peter (Sam Jaffe), a gurning simpleton more interested in his soldiers (both toys and real ones) and his mistress Elizaveta (Ruthelma Stevens) than Catherine. Russia is ruled by his mother Empress Elizaveta (Louise Dresser), a domineering matriarch. The (initially) innocent Catherine is admired by the rakeish Count Alexey (John Lodge), but must learn to master the skills of the court – and the sensuality of her own body – to take power. 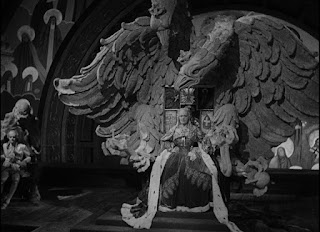 The Scarlet Empress is pretty crazy. If you are coming here for a history lesson on Catherine the Great, keep on walking. Josef von Sternberg called it “a relentless excursion into style” and that’s a pretty good description. It’s a parade of his fascinations (and obsessions), set in a Russia that never really existed but I suspect Sternberg would argue ‘should have done’. This is Russia as a medieval backwater, built entirely from Cossacks, icons and gargoyles, with the Russian court a ramshackle wooden palace with a throne that wouldn’t look out of place in Game of Thrones. Much of the sense of time and place is buried under this and huge chunks of the film may as well be silent cinema, so little does dialogue matter and so skilfully are emotions and events communicated visually.

However, grab this in the right mood and this is a film it’s impossible not to admire and even fall in love with a little bit. There really is nothing like this, and like much of Sternberg’s work there is a visual sweep and drama here that few other filmmakers can match. There are some truly striking images, from Cossacks riding through the palace, to Sam Jaffe’s gargoyle like face as Grand Duke Peter, to a giant drill bit punching through the eye of a wooden icon. The jaw dropping production design – sets that dwarf the actors – is mixed with misty lighting for romantic assignations and deep shadows for (literally) backstairs court intrigue.

In all this, the story counts for very little, with the primary focus being Sternberg’s obsessions. Many of those seem to be sexual. The Scarlet Empress was released right on the cusp of the Production Code being enforced in Hollywood – and it’s hard to imagine it could ever have been passed once the code was fully enforced. The film lays it’s hand out early with an S&M tinged Russian torture montage (with naked women in iron maidens, whippings, beheadings and a giant bell with the clapper replaced by a human being) and hardly stops from there. Later montages feature explosions of Peter’s soldiers, looting, shooting and orgying across Russia.

The primary lesson Catherine needs to learn in Russia is to use the power of her own sexuality. The idea of politics is even openly rejected by Catherine in favour of mastering her seductive powers. Initially a blushing, mousy innocent, she becomes increasingly coquettish and seductive as the film unfolds. In an early scene she nervously fingers a riding crop – by later in the film she’s bending it in her hands with all the confidence of a Dominatrix. Lovers come and go, as she wins supporters over to her side (she “added the army to her list of conquests” a caption deadpans at one point). Trysts grow in confidence, as Dietrich’s performance progresses from innocence to dominant knowingness. 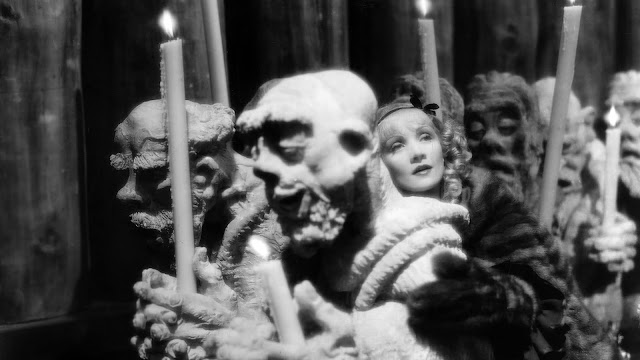 Dietrich is as close as she’s been to a prop here, striking a series of poses in a performance that’s largely campily two dimensional. For the first 70 minutes she’s given almost nothing to do other than strike a bemused face: for the remaining 40 minutes she’s like Sternberg’s wet dream of a sexually aggressive domineering woman. Basic notes are what most of the cast are kept to, fitting the impression that they are just props in a silent film. John Lodge scowls and poses as Count Alexey and is as wooden as most of the set. Sam Jaffe is one of the gargoyles made flesh. Louise Dresser is an older version of the sexual kingpin Catherine becomes.

But that’s because it’s all about the mood and the style. The Scarlet Empress has that in absolute spades. It’s as close as you can get in the 1930s to a director of a major Hollywood studio film, pouring money into something that maybe only he will like. It’s silent film roots can be seen not only in its vast impressionistic sets, but also in the steady parade of title cards that dance across the screen to communicate what passes for the story. Acting and story are very much secondary to the mood of sexual exuberance and craziness that dominates nearly every frame of the action. The film was a massive bomb on release – perhaps because no one else could quite work out what it was – and it’s taken decades for its overblown mad genius to be recognised. But it’s a film unlike any other and for that alone you should see it.