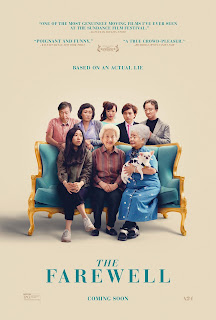 When you have lived your life as part of two different cultures, it can be difficult reconciling them together. It’s something Lulu Wang has personal experience of, born in China and moving to America aged 6. She grew up American, but with a strong Chinese heritage – and a family who held some sharply different cultural expectations than she had grown used to in her adopted country. Wang explores these details with warmth, insight and wit in the semi-autobiographical The Farewell, based on events that happened in her own family.

Billi Wang (Awkwafina) is a young graduate in America, working out what the next step of her life will be. All this is put on hold when she hears from China her paternal grandmother “Nai Nai” (Zhao Shu-zhen) has been diagnosed with terminal lung cancer and has only months to live. As per Chinese custom, the family decide to keep her diagnosis a secret from her so she can enjoy the last few months of her life untroubled by worry and fear. Billi and her parents Haiywan (Tzi Ma) and Lu Jian (Diana Lin) fly to Changchun to attend a hastily arranged wedding of Billi’s cousin – the wedding being an excuse for the family to come together for one last time. But, arriving in Changchun, Billi struggles between her desire to tell Nai Nai the truth and the desire of her family (however difficult they find it) to maintain Chinese cultural beliefs.

In another world The Farewell could have been an out-and-out comedy of cultural clashes and misunderstandings. That’s not to say the film itself doesn’t have a great deal of wit in it. But Wang has directed a sharply intelligent, respectful, compassionate and heartfelt exploration of cultural legacy and split loyalties between them, that refuses easy answers or moral judgements. Instead, it encourages a great deal of thought: what would you do in this situation? Whose values are ‘right’ – those of your adopted home, or those of your family heritage? Is it even right to think in these terms of one being more legitimate than another? How does returning to the country of your birth make you reflect about the things you left behind or have forgotten?

It all comes out beautifully in Awkawafina’s delicate and tender performance as Billi. Returning to China reminds her of parts of her own past she has nearly forgotten. It’s not just changes in the land where she grew up. It’s the memory of that childhood trauma of being taken halfway across the world to a new country, leaving everything she had ever known behind. Of remembering her grandfather died shortly after they left, having been told the same story as Nai-Nai, and she never saw him again. And seeing that whole cycle about to repeat again and struggling to square that with her Western ideal to be open and truthful.

But is that the right thing? For many watching in the West, we will of course assume at first ‘yes’. But, as an English-educated young doctor in a hospital points out, what harm does it really do when you can work instead to make someone’s last few months happy and free of fear? After all, you can’t change the diagnosis. And is, as the film implies, wanting to share the truth as much, if not more, about you more than it is the person you are telling?

After all, it’s not as if the family isn’t torn apart emotionally about the impending loss. Many of them at various points choke back tears and it’s clear the pressure of maintaining the front of the happy wedding is taking its toll on everyone. Billi’s dad and brother drown mountains of beer one night and even take up smoking again. The bride and groom are so distracted by the pressure, Nai Nai worries people will think it’s a shotgun wedding. Billi is even barred at first from the wedding because her family are worried she won’t be able to keep up the pretence that all is well at a joyous celebration.

Billi’s uncle Haibin points out that this ties in with a more Chinese collectivist way of thinking, Death is a terrible burden – surely its better for the whole family unit to share it among themselves rather than force it all onto the sufferer. Nai Nai would certainly agree – it’s revealed during the film she was part of a similar lie to her husband. For our Western eyes, a more individualised view of people having all the choice themselves seems more important, but The Farewell’s strength is showing that such a view – well-meaning as it is – can also be an arrogant imposition of thinking what you instinctively believe is more legitimate than another cultures.

It’s a fascinating insight into discussions and conflicts that must be occurring in families all over our newly shrunk globe. And this might make it sound like a tough film to watch, but it’s not. It’s manages also to be wonderfully warm and life-affirming and if it tugs the heartstrings, its because Wang directs it with such truth and empathy for all the characters. Their little idiosyncrasies ring very true and the film is crammed with moments of small but truthful family humour.

It’s also superbly performed. Awakwafina is excellent. Zhao Shu-zhen manages to transcend the cliché of the larger-than-life older woman, by making Nai Nai a force of nature, but also wise and gentle with a slight air of determined sadness. Tzi Ma and Diana Lin are wonderful as Billi’s parents, quietly juggling their own mixed feelings. The film mines some gentle humour from how Billi’s family Westernised ways have made them, at times, strangers in China and the actors all achieve the difficult feat of actually feeling like a real family on screen – private jokes, natural warmth, and an emotional short-hand.

The Farewell is a gentle, charming but very thought-provoking movie that asks intriguing questions about multi-cultural families and the difficulties second-generation migrants have with balancing the culture of their ancestors with the world they have grown up in. With plenty of humour and an abundance of warmth, it’s got something for everyone.