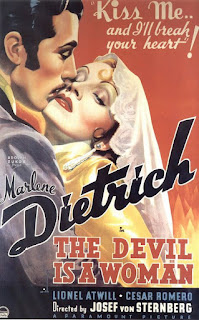 The Devil is a Woman has more than a whiff of being made after the Lord Mayor’s Show. It’s an impression not helped by the fact that it takes place in the aftermath of a town carnival, with Sternberg having apparently emptied the Paramount props cupboard of paper streamers. The Devil is a Woman is the final film made by Sternberg and Dietrich, a piece of contractual obligation for all concerned. Sternberg’s career deflated swiftly after it and the entire film has an autumnal sadness about it. No one seems particularly interested in what they are making, and it finds nothing new to say or do that Sternberg and Dietrich haven’t already done, other than set it in Spain (a decision that did not delight the Spanish government).

Dietrich is Concha Perez, a beyond ruthless, heartless, scheming, femme fatale who teases and uses men for her own ends with nary a second of guilt. Her web is starting to form around revolutionary Antonio Galvan (Cesar Romero). He’s warned off though by her former beau (victim?) Don Pasqual (Lionel Atwill), a middle-aged aristocrat who Concha effortlessly made dance to her tune and fund her many affairs, all while giving him just enough affection to keep him on board. Pasqual recounts his relationship with Concha in flashback – but will Antonio give a damn? Or is a duel on the cards between the two? Watch out Pasqual is an expert marksman…

For decades The Devil is a Woman was considered a lost film, until Sternberg provided one of the few copies of the film to the Venice Film Festival in 1959. This copy however did not contain the 17 minutes of footage cut from the film by Paramount (it’s a very short film, less than 80 minutes). Even found though, it’s a minor work, a little coda to seven collaborations between director and star, some of them iconic classics.

The film has all the foibles of Sternberg – and is a final indicator why this visual stylist found himself so hideously out of step in the era of the talkies. Dialogue and story are so secondary that you can’t help but notice their crudeness. When Sternberg has longer dialogue scenes, he shoots them with a cursory flatness that suggests he them over and done with as soon as possible. The passion of the film – what passion there is – goes into the visuals, whether it’s the streamer filled carnivals, the thundering rain that powers down on the duel or (of course) the sultry, painterly shots of Dietrich in luscious black-and-white.

The problem is that there isn’t really a truly striking visual in the film: perhaps Sternberg had used all his fire on The Scarlet Empress or maybe, after the disaster of that film, he was worried (or had been firmly told) that his final Paramount film had to have at least some semblance of the conventional to it. So, The Devil is a Woman is a conventional film with little flashes of imagination and visual skill – like the balloon that bursts to reveal Dietrich’s face (marksman to burst the balloon none other than Sternberg himself). It all adds to the end-of-an-era feeling that permeates the film.

The most interesting beat in the film is the feeling that we are watching yet-another on-screen playing out of Sternberg’s own psycho-sexual drama. Surely, he saw more than a bit of himself in Pasqual? The older, refined man, hopelessly infatuated with the beautiful, younger woman who drains him dry of money and prestige, but won’t commit herself to loving him? Pasqual the masochist who keeps coming back for more and more humiliation and sexual rejection? Hard not to think that there was more than a bit of Sternberg in Atwill’s performance – or that Concha’s late abandonment of Antonio to return to Pasqual was Sternberg’s own fantasy. Of course, it’s all Sternberg’s view, where he was very much the Henry Higgins. Dietrich would very well disagree.

The Devil is a Woman has its moments. Although often (despite being very short) rather slow – the long flashback-structure back story takes it time and then some – Sternberg can still find moments of beauty. Cesar Romero brings a lot more charisma and interest to the sort of handsome beefcake role John Lodge played in The Scarlett Empress. (In a bizarre advance in-joke Romero wears something very close to a Batman style mask at one point). Dietrich is given little to do other than be as cold as possible, but she manages to add depth and shade to her character. Atwill is rather good as the masochist Pasqual and the rain-soaked duel between him and Romero is worth the price of admission.

It can’t change the fact though that this is rather a sad coda to a great collaboration, an after-thought where it’s not clear that anyone was really interested in the content itself. It’s final shot is fitting: a chariot rides away into the sunset. It fits for this partnership – and effectively for Sternberg’s career which never achieved these heights again.