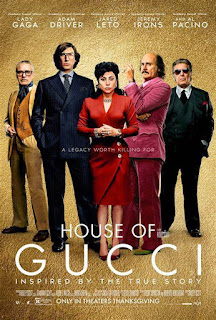 There are few juicier combinations than glamour, money, fashion and true crime. Scott’s House of Gucci taps into this with a film that’s somewhere between pantomime and tragedy. Full of actors giving their very best “Mamma Mia!” Italian accents and shrugging shoulders, it oscillates wildly from scene-to-scene between black comedy and operatic high drama. It’s a strange mixture, with House of Gucci becoming some sort of bizarre treat, like an end-of-year treat for cinema viewers to unwrap.

The film follows the disastrous marriage between Maurizio Gucci (Adam Driver) and Patrizia Reggiani (Lady Gaga). Patrizia, a ruthlessly ambitious gold digger, zeroes in on the shy Maurizio, heir to 50% of the Gucci fashion fortune, and marries him. This is all to the horror of his father Rudulfo (Jeremy Irons), who (correctly) identifies Patrizia’s ambitions, and cuts them off. Taken under the wing of Rudolfo’s brother Aldo (Al Pacino), Patrizia pushes Maurizio into a management role in the company – and down a slippery slope that will lead to forgery, betrayal and eventually murder.

House of Gucci feels like it might have existed more comfortably as a ten-part TV drama. It’s essentially a big, brash version of the Emmy-award winning The People vs. OJ Simpson, but told in about a quarter of the time. What this basically means is that any subtle character work and detailed story telling is sacrificed, with the focus firmly on the salacious and entertaining drama. The overall effect is a swift rush through a story that becomes a series of sensational, almost comedic, clashes between larger-than-life personalities squabbling over a huge pot of money. Like Dallas on the big-screen, it’s all scored with a series of funky pop tunes, adding to the sense of pantomime.

It’s an odd outing from Scott, with (it felt to me) little of the individual stylistic touches that he has bought to other projects. In fact there’s very little of his stamp on it: it’s Scott as professional craftsman. He and the film feel very confused by the tone. Mostly the film doubles down on black humour and show-casing big, brash performances. Then it might acknowledge briefly that there were real victims here, which it wants to treat with a level of respect. By and large, the film is like a glossy magazine article, with Scott nudging you as you turn each page and saying “you will not believe what happened next!”

I suppose House of Gucci probably could have explored more the personal and emotional hinterlands of its characters. Relationships shift dramatically from scene-to-scene, with Maurizio and Patrizia’s marriage souring over-night, for no clear reason. Pre-existing family rivalries and politics could have been explored more: it’s heavily implied Aldo and Rudolfo are already engaged in a struggle of ideals (Aldo wants commercial expansion, Rudolfo to remain an elitist fashion house). Drama could have been made of the attempts by both brothers to use other members of the family as pawns in this feud. But then, a film that dived into the psychology of the players might well have ended up being more about business and less about the entertaining ruthlessness of the rich and famous.

The performances are wildly different in tone. Lady Gaga effectively holds the film together as an ambitious woman who is only partially aware (at first) of what a ruthless gold digger she is. Devoid of any interests other than being rich (“I’m a people pleaser” she tells Rudolfo when asked what her interests are), Patrizia is the sort of monster of ambition who would fit comfortably into an episode of Desperate Housewives. Setting her cap at Maurizio with a laser-like focus and shafting everyone left, right and centre (although Gaga does hint at her deeply repressed insecurity) it’s a performance that walks a fine line between OTT and human. The film has a lot of fun at her amoral certainty – she sees no problem with forging Rudolfo’s signature on some vital papers after his death (the film even sets forgery up as Chekhov’s skill in its opening scenes) and Gaga enjoyably plays the outrage that only someone convinced they never wrong can feel.

Opposite her, Driver plays Maurizio as a timid, easily seduced young man, pushed into taking a leading role in a business he has no real interest in (or aptitude for). Driver is softly spoken – and gives the most restrained and grounded performance in the film – and frequently meets another demand from his wife with a chuckle and a reluctant “Patrizia…”. House of Gucci steps carefully around Maurizio, sometimes playing him as an innocent abroad, at others as a man corrupted by his wife into a creature of ambition.

Most of the rest of the cast go for a broad style which, while fun to watch, only adds to the sense that we aren’t supposed to be taking anything too seriously. While many of the Gucci family probably were larger-than-life personalities, I’m not sure they could have been the cartoons they are here. Irons goes for a waspish Scar-like mastery of the cutting remark. Pacino doubles down on his shoulder-hunched energy, with added shouting. Hayek gives a performance that’s a near master-class in Vampish camp, plotting murder from a mud bath. 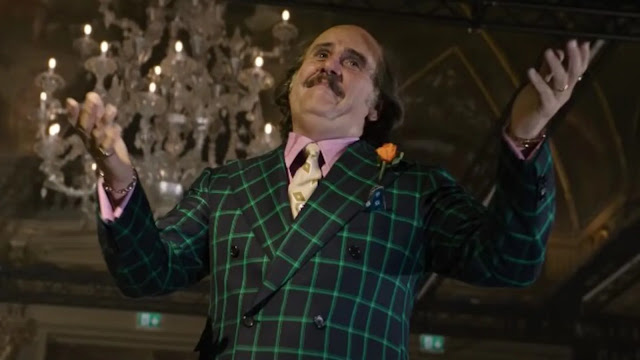 Towering above them all is Jared Leto, who seems to be in a film all of his own, with every scene another clip for his “for your consideration” show-reel. Buried under a mountain of latex that transforms him into a clone of Jeffrey Tambor, Leto goes all out as the passionate, ultra-stereotypical-Italian Paolo Gucci, in a performance that’s either a shameless parade of showing off or somewhere near a stroke of genius. It works because, beneath all the hammy exuberance, Leto make’s Paolo a desperately sweet guy, the only real innocent in the film. Leto and Pacino in particular feed off each other – a late scene between the two is hilarious (I’m not sure in the right way, but who can tell what these actors are aiming for sometimes) in its joyful overplaying.

Perhaps joy is the one thing House of Gucci needs a little bit more on. I wonder how more entertaining again it might have been if the film had really gone all out on being a camp classic. It shies away from this, wanting to leave some vestige of respect for the dead and not lose its true-crime-roots. But, I wonder if a director more suited to this material than Scott – who struggles to stamp his personality on it – might have done more to make this into a cult classic.