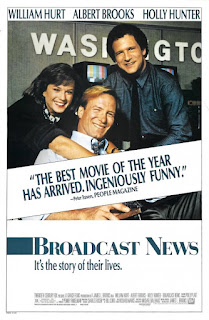 TV news – what is it for? To inform or entertain? It’s a debate James L Brooks tries to explore in his inconsistently toned hybrid rom-com and satire. At the end you very much intended to come out with the view that it should be about one, but is more about the other.

In the Washington branch of an unnamed network, Jane Craig (Holly Hunter) is a rising star producer, prone to daily emotional breakdowns. Her best friend is brilliant, committed reporter Aaron Altman (Albert Brooks), who longs to be the anchorman but lacks social skills. Arriving in their branch is Tom Grunick (William Hurt), handsome and full of TV savvy, set to become an anchor but lacking any real knowledge of either journalism or current affairs. Naturally a romantic triangle develops between these three, along with all sorts of debate about the purpose of TV news.

The film stacks the deck firmly in favour of the view that news should be a comment-free recitation of facts. Brooks’ film bemoans – often in heavy-handed ways – the intrusion of human interest, soft stories and puff pieces in place of hard-hitting questions and challenging coverage. Tom Grunick is the embodiment of this: charming, friendly, reassuring – and totally uninformed, interested in “selling” a story rather than telling it. Meanwhile, to the film’s disgust, the higher-ups at the network frequently value appearances and popularity over tough analysis, and looking good on TV counts for more than journalistic skills. Pity the film: if it feels this network is bad, imagine how it’d feel about Fox News today.

Of course what the film isn’t interested in is acknowledging a certain level of showmanship is an important tool in making the news accessible, engaging and interesting for the audience – making them more likely to pick up the important things in the content. It also overlooks that purists Aaron and Jane may avoid stage-manging their stories as overtly as others – but they’re more than happy to fill them with heart-string-tugging references and shots to get the audience reactions they want. In fact, you can see Tom’s point – what’s really wrong with him interjecting a shot of his own teary face while interviewing a rape victim (a moment he recreates)? Isn’t that basically the same?

Broadcast News tries to outline the difference, but I’m not sure it goes the full distance – or makes the debate accessible or interesting. That might be partly because the film can’t decide whether to give more attention to the satire or the romance – Jane is attracted to Tom (who returns her feelings), but is extremely close with Aaron, who carries a not-even-concealed passion for her. Both plots sit awkwardly side-by-side, getting in each other’s way and not adding insight to each other.

But then the film is fairly shrill. That partly stems from the two characters we are meant to relate to being tough to like. Holly Hunter is dynamic as the forceful, passionate Jane, but she’s also a rather tiresome character. Her purist demands are slightly holier-than-thou and while there are nice touches of humanity (on a date with Tom, she doesn’t want her handbag opened at a security check because she’s put a pack of condoms in it)  the film doesn’t manage to warm this control freak (so domineering she can’t get in a taxi without dictating the route). Jane also has a tendency to burst into tears – a suggestion of some underlying emotional problems the film instead treats as a joke.

That’s nothing compared to Albert Brooks’ Aaron Altman. This is exactly the sort of character beloved by film-makers, but who if you met in real life would come across an an unbearable creep. Like Jane, he’s an uncompromising idealist whose pious self-importance quickly grates. The film doesn’t appreciate the irony that its champion of professional reporting yearns to be the pretty-boy face of the network and resents that he’s never been the popular kid.

His tantrums and rudeness are meant to be signs of his genuineness and the film leaves no doubt that his love for Jane should be requited because he knows what’s best for her. He’s the Nice Guy who doesn’t get the girls even though he really deserves them.  A scene where he furiously berates Jane when she confesses her feelings for Tom, then demands she leaves, then demands she stays so he can lecture her on his pain and why her feelings are wrong smacks of a thousand male script writers who didn’t get the girl they wanted and it was so unfair.

The film’s view of women is often questionable. Today, Aaron looks more like a Proto-Incel, one emotional snap away from strangling Jane because she won’t love him when she SHOULD. The film sees him as a relatable, principled hero. Jane may be smart and principled, but she’s hysterically over-emotional for no given reason (Women! They’re so crazy!), domineering and controlling. The film’s only other female character is Joan Cusack’s production assistant who spends her time either shrieking in shrill panic or talking with nervous incoherence.

So, it might be a fault of the film that the character I related to most was the one we were meant to condemn. William Hurt’s Tom is nice-but-dim, superficial but polite, supportive, hard-working and honest, self-aware enough to feel guilty that he’s not really qualified to do the job. He tolerates being mucked around by Jane far more than many others would and despite being constantly abused by Aaron, offers him no end of support. If Tom is the nightmare shape of TV news, you end up thinking “well heck, is it really that bad?”

Broadcast News overall is an underwhelming experience, not funny or romantic enough to be a comedy, or insightful enough about journalism to be thought-provoking. Brooks directs with his usual televisual lack of flair, but there are some decent comedic set pieces: Cusack has a mad-cap dash through a TV studio to deliver a taped report for a deadline that is a masterclass in physical comedy, while the film’s best set-piece is Aaron’s sweat-laden anchor appearance on a weekend news bulletin. But the film gives too many characters a pass and avoids asking itself the tough questions. It ends up a bit of a slog that probably has more appeal to insiders than audiences.