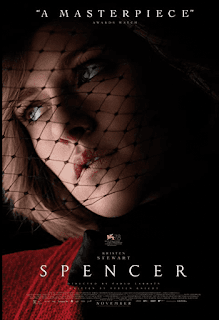 There is no more famous fairy-tale-gone-wrong in history than Prince Charles and Diana. It’s been explored in countless books, memoirs and films. It’s the meat of Netflix’s The Crown. Interest in it has been rekindled again after Prince Harry’s royal resignation. It’s a fable (also what this film claims to be, based, it claims, on “a true tragedy”) that will only become more of a legend. At its centre is Diana, a figure idealised and enshrined by a tragic early death, who had all the warmth, lovability and public humanity the more reserved Charles lacked. Diana’s romanticism has always helped her be remembered as the hero of this tragedy, with Charles the villain. You’ll see no difference in opinion here. Spencer is a fantastia on Diana that feels like it has been squeezed out of the pages of a host of sentimental pro-Diana memoirs from the likes of Paul Burrell.

Set over a three-day Christmas holiday at Sandringham, around 1991, the film follows a disastrous holiday of psychological depression, despair and isolated crisis for Diana (Kristen Stewart) as her marriage to Charles (Jack Farthing) finally, irretrievably, collapses. Over those days, Diana hides in her room, throws up meals, is treated with stony silence from the Royal family and quietly bullied by Sandringham equerry Major Gregory (Timothy Spall). Her only friends are besotted loyal dresser Maggie (Sally Hawkins) and avuncular chef Darren (Sean Harris) and her only moments of happiness are with her two young sons, giving her the only taste she has of a normal life.

If there is one thing Spencer does very well, it is giving an insight into how overbearing and crushing depression can be. Diana is erratic, frequently tearful, prone to fantasies and suffers through prolonged periods of self-loathing, exhibiting as chronic vomiting after every meal and possible self-harm. Stress makes her sharp and waspish with those she doesn’t trust and almost overwhelmingly needy with those she does. Larrain visualises this with muted pallets and drained colours, showing this world in the same oppressive, depressing light as Diana see it, while Johnny Greenwood’s excellent score makes superb use of a series of unsettling chords to constantly put us ill at ease.

The downside is, the film so completely consumes the Diana-side only, that it feels like being crushed to death by a collapsing mountain of “People’s Princess” bargain-bucket memoirs. Diana is always the victim and never at fault. The film takes an idealised view of her as “one-of-us” chewed up and spat out by an uncaring system, with the Windsors as monstrous gargoyles. (A bit rich considering she’s the daughter of an Earl). Charles is cast firmly as a cold-fish and villain, heartlessly openly carrying on an affair, gifting the same pearls to Camilla as he does Diana. Where Diana is warm and playful with the children, Charles is cold and authoritative, angrily tutting at William’s failures at shooting. Where she has a natural touch with people, Charles is cold and dictatorial.

It is, basically a one-sided vision of this story. That would be fine if the film had suggested that what we are seeing is Diana’s depression-filtered perception of the world – her perception told her surroundings were like, cold, cruel and oppressive. But there is no suggestion that we are seeing this, no extenuating circumstances or slight doubts raised to suggest that there may be different interpretations of these events or that there were two people in this marriage, both in different ways at fault.

It’s something The Crown has carefully – and skilfully – done, by demonstrating these are two people never in love with each other in the first place, with no common interests and outlooks. Spencer could have delved more into helping us understand how this situation came about. It isn’t interested in doing this: as far as the film is concerned, Charles is an unfaithful bastard (Jack Farthing’s channels his Warleggen from Poldark, playing every scene with a razor-blade growl) intent on gaslighting his wife. It doesn’t seem fair.

And lord knows, I’m sorry for Diana who should never have agreed to marry a man she was unsuited to and in love with another woman from day one. There is a film to be made (eventually) about Diana which explores the fascinating puzzles in her identity. The woman who loathed the press but also was an expert manipulator of public opinion, who yearned for privacy but loved public and private devotion. Spencer doesn’t explore any of this, instead presenting a simplified, romantic vision of a woman exactly as you would expect to see from a cliched TV movie. At heart, in fact, that’s what Spencer is – a slushy made-for-TV-movie shot like an arthouse film.

That’s perhaps why its full of such ridiculous flourishes. We’ve obviously talked about the stone-cold Royals. We get cod psychology – “Where the fuck am I?” are Diana’s opening lines, hammering home for us (in case we are about to miss it) that her tortured psychology is the heart of the film. As the Royal Court arrives at Sandringham, their cars drive over the dead body of a pheasant – symbolism you see! Diana reads a book about Anne Boleyn – and sure enough she is soon literally communing with a ghost of the beheaded Queen, both of them claiming themselves as victims of a cruel king who loved someone else. Everything in the film is heavy-handed and designed to push Diana as the faultless victim and the Royals as scowling monsters.

Kirsten Stewart gives a decent impersonation of Diana – vocally she’s spot-on – but for me she struggles in the shadow of Emma Corrin’s extraordinarily transformative work in The Crown – a show that also gained a lot more emotional insight into this story than the film even begins to achieve. It’s shot with a real arthouse style, but at heart it’s a silly and shallow film that never tries to understand either Diana’s inner life or how her marriage became what it was.