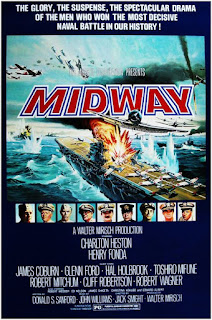 On 4th June 1942, the fate of the Pacific naval war was arguably settled. The Japanese plan to invade the American base on the island of Midway and, crucially, wipe-out the American aircraft carrier force, instead saw a near total US victory and all four Japanese aircraft carriers destroyed. The story is re-told here as a classic all-star Hollywood epic, with the first hour dedicated to the planning and the second hour to the events of 4th June.

After its – successful – run in the cinemas, Midway was re-edited into a two-part TV mini-series. To be honest, that feels more like its natural home. It’s competently directed by Jack Smight – but no more than that – and revolves around several scenes of star-actors pushing models around maps and less famous actors pretending to fly planes in front of blue-screen. The film makes a proud statement at the start of how it has chosen to use only actual archive combat footage to “honour those who fought” – but this actually, you suspect, was motivated more by the fact it’s much cheaper to purchase and clean up piles of stock footage than it is to shoot things afresh.

The main narrative covers the planning and the crucial day of the battle itself. A brief “human interest” story is introduced via Charlton Heston’s (fictional) Captain Matt Garth, an aide of Admiral Nimitz. Will Chuck improve his relationship with his fighter pilot son, who has fallen in love with a Japanese girl? Whadda you think? Saying that, this rather clumsy human-interest story (which features the only female character in the film) does make some interestingly critical points about the policy of internment against Japanese Americans – stressing both the injustice and explicit racism (American Germans and Italians faced no such fate) behind the policy.

In fact, Midway is very sympathetic in general to the Japanese – as Nimitz even says at the end, perhaps it was less a question of skill than luck that led to the final outcome. The Japanese navy is presented as an honourable and thoughtful opponent, respectful of human life and conducting the war via a code of honour (the kamikaze runs of cliché are completely absent). In particular Admiral Naguma (well played by James Shigeta, in possibly the film’s stand out performance) is a decent man caught-out continuously by horrendous luck and timing, who pays a heavy price. Midway is strong in stressing there is no leeway at sea – get caught out there and it’s the bottom of the briney for you.

The Japanese planning is even slightly tragic in its flawed assumptions – crucially they are totally unaware that their codes are broken and that, far from launching a surprise strike, they are actually sailing into something of a trap – while Toshiro Mifune brings a lot of nobility to Yamamoto even if all he really does is pensively stare at a series of maps.

On the American side, Fonda leads the way, giving Nimitz more than a touch of Fordian home-spun heroism. Heston’s presence does well to link together the various true-life characters and location. Most of the rest of the all-star cast are restricted to one or two scenes: Coburn rocks up to handover a report from Washington, Wagner briefly pushes models across a table in a planning room and (hilariously of all) Mitchum delivers both his tiny scenes from a hospital bed, coated in skin cream.

When the action gets going though, it’s done pretty well with the po-faced, stodgy seriousness these war-time later 70s epics nearly all seemed to have in common. The stock footage does actually look pretty good and the drama of the battle – and the tactics – are captured fairly well. It’s intermixed with some real ships and all scored with a great deal of punch by John Williams. It’s all really B-movie, TV-movie-of-the-week stuff but it’s also far from obviously flag-waving either, instead doing its best to be even-handed and even a little bit critical. You’ll learn what happened and also have a bit of fun into the bargain.