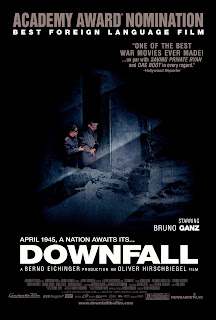 Few people had such an impact on the 20th century than Adolf Hitler. Countless dictators unleashed genocide and war, but few on Hitler’s scale. His dark presence lingers like a cancer on German history, an existential guilt the country has spent generations trying to exorcise. Chronicling the final days of Hitler in his Berlin bunker, told with cinematic verve and documentary realism, Downfall was the first German film to directly tackle Hitler. Perhaps it needed a German film to present a Hitler who felt real rather than an under-the-bed monster – and was able to look into his darkness, and the horror of his world, in a way few films have ever done.

Downfall was controversial on release for ‘humanising’ Hitler. Certainly, the film shows a man capable of consideration and even moments of warmth. But it’s never in doubt a man can be kind to a secretary or affectionate to a dog and still be a sociopath who greets news of young soldiers dying with the words “that’s what young men are for”. Can still be so wickedly egotistical he decides the entire German population should join him in immolation while manipulating with quiet emotional pressure as many of his followers as possible to join him in suicide. Watching the film, you cannot escape Hitler’s monstrous destructiveness, his complete lack of empathy and his instinctive, brutality.

Much as we might not want to face it, Hitler was human: a ruthless, megalomaniac and genocidal one. Part of the fascination of the film is watching those closest to him – Eva Braun, his secretaries, his immediate staff – try to reconcile the kinder private man they know with the one they hear screaming for his Generals to be shot and ranting about Jews and his desire to annihilate entire populations. At one point Eva Braun tells Junge that when saying those things “he is being the Fuhrer” – as if Hitler and the Fuhrer are some hideous Jekyll/Hyde monster.

Downfall charts the final spiral of Hitler as he goes through the stages of grief at his impending defeat. Self-confidence turns into carpet-chewing anger, when reality becomes unavoidable. Grief mixes with fury as Hitler blames everyone – his Generals, his followers and finally the German people themselves – except himself. Never once does the film offer the slightest shred of sympathy for Hitler, this nightmare being all his own creation, consuming him just as it consumed tens of millions before.

As Hitler, Bruno Ganz is quite simply phenomenal. Studying for months film of Hitler, Ganz captures his physicality perfectly – adding Hitler’s likely (undiagnosed) Parkinson’s, a twitching hand he constantly hides behind his back like a nervous expression of his doubt. In private conversation, Ganz’s Hitler is polite and even a little warm, but never anything less than a monster of self-absorption. His favourite topic is himself, and his quiet expectation that everyone should join him in death is matched only by his cold dismissal of those who fail to live up to his twisted standards.

This is nothing to his furious outbursts at those perceived to have betrayed him. His spittle-fuelled rants perhaps only come close to the true carpet-chewing bawlings Hitler was apparently capable of, but they are tour-de-forces of relentless fury and self-pity. Ganz plays Hitler with empathy, but makes it very clear Hitler was incapable of such an emotion himself. The suffering of others is nothing to him. He sheds tears over the death of his dog and barely bats an eyelid at the deaths of thousands: instead they are a perverse monument to himself.

Nazi Germany is the country he created, and Downfall is exceptional in showing how the last days of the Reich were like the final hours of a cult. Few things display this better than the Goebbels themselves. Ulrich Matthes chilling Goebbels is so consumed with devotion for his leader, weeping when ordered to survive and continue the fight, that he cannot imagine living without him. Like Hitler, his fury is reserved for the German people – to him the German people chose their fate and cannot complain that their throats are now being cut.

This is matched by the devotion of his wife Magda, played with a chilling, twisted sadness by Corinna Harfouch, so devoted to Nazism and Hitler she decides (with the logic of a twisted fanatic) her children should die rather than live in a world without them. In a quietly devastating, almost impossible to watch, scene she feeds them ‘medicine’ (actually a sleeping agent) – her eldest daughter, sensing something is wrong, resists desperately before being force fed – then silently breaks a cyanide capsule in each of their mouths, with a kiss to each forehead. Everyone in the bunker knows this happening, but no one stops her. In this cultish world, where death is normalised and suicide expected, it’s only natural. 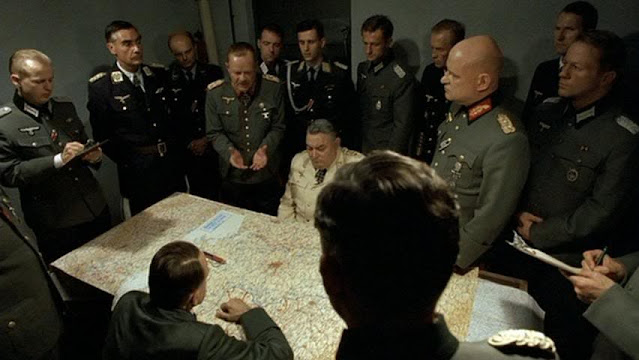 The second half of the film is a rash of suicides. A German doctor, his hands filthy with the euthanasia programme, detonates two grenades at a dinner, killing his whole family. The Goebbels shoot themselves and order their bodies cremated in a grim echo of Hitler’s own fate. As survivors plan a breakout, an officer calmly states he’s not leaving and shoots himself in the mouth – no one bats an eyelid. Hitler hands out cyanide capsules like candy, the unspoken expectation constant.

This callous brutality and nihilistic embracing of death is constant during the grim, pointless, desperate battle for the city. Indoctrinated children are press ganged into the front-lines and then choose suicide over surrender. Lynch mobs prowl the streets, executing anyone not seen to be fighting – mostly old men, disabled veterans and anyone not holding a gun. The film never suggests the German people are victims, but suggests the final target of the Nazis was Germany itself.

The film is a long spiral into an anti-chamber of hell. After the opening half hour, the Russian advance means the action retreats almost entirely underground into the bunker. In this subterranean world, the cast slowly thins out as people seize their chance to flee, leaving only the most deluded, hard-boiled and fanatical. Generals may protest Hitler’s denunciations of the ordinary soldiers, but will pull their guns on anyone who even suggests the idea of surrender.

In a country where Hitler has encouraged a denial of reality, the scheming and jockeying for position continues even in this madness. Even those who see the end is here are still deluded: Himmler firmly believes a brief chat with Eisenhower will be enough for the SS to be entrusted with maintaining the peace against Bolshevism. Only Speer (played perhaps with too much sympathy by Heino Ferch, in the film’s one mis-step) is clear eyed about what is happening.

Downfall is relentless and eye-opening in destruction of the final days of the Reich. Its reconstruction and research is faultless and acting breathtaking. Framing the device through the experiences of naïve secretary Traudl Junge (an excellent Alexandra Maria Lara), we get a sense of how the scales slowly and painfully fell from the eyes of the German people. It’s atmosphere of oppressive claustrophobia and bleakness is expertly done, with events swiftly and awfully spiralling down into one where death becomes an unremarkable inevitability. No one could come out of this either admiring Hitler or seeing anything in Nazism other than a twisted cult that consumed its followers with the same blood-curdling carelessness it did its millions of victims. Hitler may have been a human, but Downfall makes clear he was never humane.