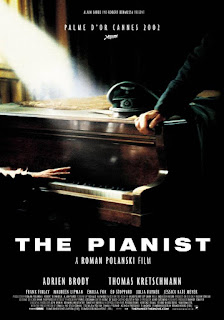 Few directors have as personal a link with the Holocaust as Roman Polanski. As a boy, he witnessed his parents deported to their deaths, surviving only by chance, escaped the Krakow Ghetto and was sheltered by a Catholic family. The lasting impact is clear to anyone who has seen a Polanski film and he avoided Holocaust projects for decades (including Spielberg’s offer to direct Schindler’s List). The Pianist was the film he made on this trauma. Perhaps because the experience of Wladyslaw Szpilman was, in many ways, similar to his own.

Wladyslaw Szpilman (Adrien Brody) is a famous Polish concert pianist. As the German occupation begins, Szpilman and his family face the cruel downward spiral of the new regime’s anti-Semitic policies. Very quickly, laws move from a ban on Jews in public places, to wearing Star of David badges to herded into ghettos. In the ghettos, life is a terrifying struggle, as the German occupiers shift from simple bullying to acts of random, indiscriminate murder. The whim of a German soldier decides whether you live or die. Szpilman’s family are eventually deported to Treblinka, but by a twist of fate Szpilman escapes – and finds himself hiding in Warsaw for years, sheltered by the Polish resistance, desperately trying to survive until the war ends.

Polanski’s film is heart-breakingly sincere and the documentary matter-of-factness it presents appalling, unjustifiable crimes gives great power to the whole film. It never blinks or looks away, and never offers false hope or sentiment. Only the terrible realisation that nothing can have any impact on whether you live or die: death could come from as little a thing as dropping a brick. People are plucked from lines and shot, speaking at the wrong moment is a death sentence and people in wheelchairs are tipped out of fifth storey windows.

There are moments where Polanski seems to be commenting on Schindler’s List’s touches of melodrama: that film featured a Jewish man saved from death by a German officer’s gun jamming – when the same thing happens in here, the German officer calmly stops, carefully reloads the gun, checks it and shoots his victim in the head. That’s the reality. The Pianist tracks all this with a traditionalist, stable camera and a marked restraint. There is no flair, or immersion, to any of this film. Instead, it grimly and calmly shows you each horror.

There is also no sense of fate or destiny. Szpilman survives – while every other Jewish character he encounters does not – not because of things he does himself, but because of chance, luck and risks taken by others. There is a powerful will to survive in Szpilman, but you can say the same for thousands of others. And, as the film demonstrates time and again, determination and desire to live won’t save you if a German officer decides to make an example of you. 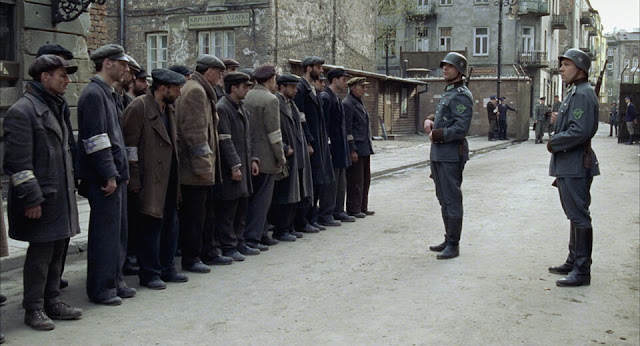 Polanski’s film is honest and shocking in its presentation of the descent into brutality in the ghetto. The film chillingly presents the viciousness of what starts as bullying – the German officers who smack Szpilman’s father (a dignified Frank Finlay) around and force him to walk in the gutter – into killing-for-sport. Literally so: German officers turf out the occupants of a building, just for the ‘fun’ of shooting them down like rabbits in their car headlights as they run away.

While the first half of the film covers the horrors of the Ghetto – from over-crowding, to deportations to the increasingly open and random violence – the second half becomes a survival tale that owes a lot to the unsettling horror films of Polanski’s early career. Hiding in a series of apartments, knowing discovery will lead to instant death, Szpilman find himself in a terrifying city where the slightest sound will condemn him. After the noise of the ghetto, the silence of these apartments – and the long periods of silence from Szpilman himself – become increasingly overbearing, while also helping build the dread of discovery.

The only sound we hear are the piano concertos Szpilman is reduced to playing in his head. Frequently Szpilman’s hands move to play an imaginary piano. In one apartment, there sits a piano he can never play: nevertheless his first act is to open it and let his hands dance perfectly above the keys, imagining the music they produce. It’s a brilliant reminder of the ordinary life he has been forced to leave behind – and how, even when things are at their worst, we cling to the things that make us human.

As Szpilman weakens and grows pale in his apartment prisons, he witnesses both the Ghetto uprising of 1943 and the Warsaw uprising of 1944. Polanski treats this urban war with the same chilling matter-of-factness as the rest. From Szpilman’s window we see bodies fall and buildings burn. People slump dead in unusual, un-cinematic positions – a woman, shot in the back, falls to her knees and slumps forward – and with an abrupt, horrible finality. Only someone who has seen death in war, could film it like this.

When Szpilman finally emerges into Warsaw – a city Polanski has only let us see as Szpilman sees it, a few buildings, a street or two – he finds the city a burned-out ruin. It’s the first crane shot of the whole film, that until then has kept its formal angles down at the level Szpilman has experienced. The wreck of the city also matches Szpilman, now an emaciated, mute Beckettian tramp, clutching his only food, a can of pickles.

Despite all this, the film is full of good, brave people who help Szpilman, many of them in the Polish resistance. Most affectingly of all is the touch of hope the story offers – the last to help is a German pfficer (affectingly played by Thomas Kretschmann). The motives of this character are left vague – is it kindness, weariness with war, disgust at Nazism or just another whim – perhaps because all we know is this man, who helped many others as well, died in 1952 in a Soviet prison camp. For all that, seeing a good man in a uniform worn by so many murderers,  gives you hope something can come out of this wreckage. 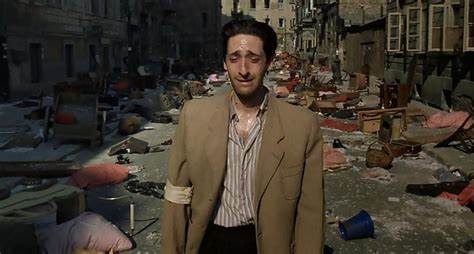 At the heart is Adrien Brody, who gives a transformatively superb performance as Szpilman. Wry and dry at first, the film sees him being hollowed out into someone scared, desperate and finally emaciated and traumatised. Brody’s brilliance is in stressing there is nothing out of the ordinary to Szpilman beyond his piano playing. He has to learn to bear the guilt of having no choice but to walk away while his family are killed. But he never loses his humanity and dignity – even as a frazzled tramp, when finally allowed to play a piano, after a pause he launches into a performance of breath-taking cathartic release. It’s a superb performance.

The Pianist showcases the sadistic whim that drove the Holocaust. Death is not operatic, but functional, everyday and comes without warning. The film is unflashy, almost classical in its approach, carefully paced and un-melodramatic. But that reflects the lack of romance in war and the grinding terror and suffering of just surviving. By focusing on a single man’s story and experience, it helps us begin to appreciate that his story was just one of millions. That helps make The Pianist one of the most compelling, moving and brilliant Holocaust dramas ever made.